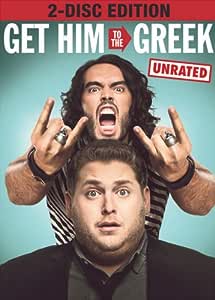 Get Him to the Greek (Two-Disc Collector's Edition)

Jonah Hill and Russell Brand reunite with the director of Forgetting Sarah Marshall in this outrageous comedy about Aaron Green (Hill), an aspiring music executive, who has 72 hours to deliver the wild rock legend, Aldous Snow (Brand), from London to Los Angeles for a comeback concert. In order to keep his job, Aaron must navigate a minefield of mayhem and debauchery to get Snow to the world famous Greek Theatre on time! From the producer of Knocked Up and Superbad comes the movie that’s “a raucous, rowdy good time” (Ty Burr, The Boston Globe).

The man who put the rock in raucous, Aldous Snow, returns to new levels of debauchery in Get Him to the Greek, something of a spinoff of the character's first appearance in Forgetting Sarah Marshall. As played by the equally naughty Russell Brand, Aldous has fallen off the wagon and is more obnoxious than ever, a condition that will make Aaron Green's job more difficult. Poor Aaron (Jonah Hill) is the goggle-eyed record-company stooge whose job it is to transport Aldous from London to Los Angeles in the course of 72 vodka-saturated hours--specifically to the Greek Theatre, where Aldous is supposed to revive his stumbling career with a comeback show. Now, given Russell Brand's raggedy hilarity in Sarah Marshall, this movie should be a slam dunk, as it imports that film's director (Nicholas Stoller), the "produced by Judd Apatow" imprimatur, and Jonah Hill in his deadpan stride. (Hill's character isn't related to his Sarah Marshall role, by the way.) And yet Get Him to the Greek summons up only sporadic laughs and commits the comedy crime of trying to explain Aldous's bad behavior, instead of simply letting his freak flag gloriously fly. So we are treated to the spectacle of Aldous's father (Colm Meaney, nice casting), who never loved his son enough, and Aldous's ex (Rose Byrne), who appears a little too inclined to spread the love around. Meanwhile, the comic situations that do arise are divorced from plausibility, whether it's the logistics of how a program like The Today Show works or the likelihood of a three-way involving Aaron's girlfriend (Elisabeth Moss, from Mad Men). One surprise: as Aaron's hard-driving boss, Sean "Don't call me Puff Daddy" Combs is thoroughly amusing. Rushed and choppy by comparison to other comedies from the Apatow mill, Get Him to the Greek feels like the sophomore slump for Aldous Snow--and possibly the swan song. --Robert Horton