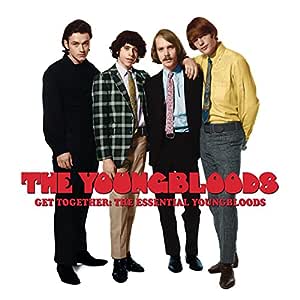 Get Together: The Essential Youngbloods

Jesse Colin Young led these East Coast folk rockers to fame with the late-'60s #5 classic Get Together -and soon after led them to San Francisco, where psychedelia crept into their sound. The aforementioned hit joins seven cuts from the Elephant Mountain LP; the U.S. CD debut of the B-side Merry-Go-Round ; the hits Grizzly Bear and Darkness, Darkness , and more. 21 tracks!

4.6 out of 5 stars
4.6 out of 5
111 customer ratings
How does Amazon calculate star ratings?
Amazon calculates a product’s star ratings based on a machine learned model instead of a raw data average. The model takes into account factors including the age of a rating, whether the ratings are from verified purchasers, and factors that establish reviewer trustworthiness.
Top reviews

Michael J. Edelman
TOP 500 REVIEWERVINE VOICE
5.0 out of 5 stars All my favorite Youngbloods tunes
Reviewed in the United States on January 18, 2017
Verified Purchase
One of my favorite albums from the late 60s is the Youngblood's "Elephant Mountain." It's full of great songs like "Darkness, Darkness," "Smug," and "Ride the Wind," that are a big part of the soundtrack of my teenage years. I was looking for a CD copy to replace my long-lost LP when I noticed this CD. It's half the price of Elephant Mountain, and has most of the songs from that album as well as the classic "Get Together" and several others I wasn't familiar with. Being curious as well as cheap, I ordered this CD instead of "Elephant Mountain," and I wasn't disappointed.
Read more
10 people found this helpful
Helpful
Comment Report abuse

David M.
5.0 out of 5 stars I enjoyed this CD so much it put me back in ...
Reviewed in the United States on May 5, 2015
Verified Purchase
I enjoyed this CD so much it put me back in time when it seemed that the beautiful sunny summer days of youth would never end.I also like the way Jessy sounds so mellow in these songs a very crisp and clean sounding band and i really like to be able to hear everything in a given song and was not disappointed hear.It always surprises me when i hear songs i new quite well but could not put my finger on the artist,so to speak,happy now and delighted to hear these old songs and rightly place the Youngbloods as the artist.Overall i could not be happier with this CD and i am very glad to have purchased it.If you like the song Get Together do yourself a favor and buy this CD.
Read more
4 people found this helpful
Helpful
Comment Report abuse

Richard A. Jenkins
5.0 out of 5 stars All the best from the Youngbloods
Reviewed in the United States on February 18, 2005
Verified Purchase
A real fan of the Youngbloods will have CDs of their individual albums (plus the subsequent Jesse Colin Young solo albums of the mid-70s). For the less fanatical (or to have a compendium for the car), this is an excellent choice and the remastering makes it musically superior to the individual CD/albums.

The CD contains what are, arguably, the group's best recordings: "Get Together", "Darkness, Darkness", "Ride the Wind" and "All My Dreams Blue", as well as enjoyable recordings like "Sunlight" and "Sugar Babe" that were part of J.C. Young's touring repertoire for many years and a Youngbloods version of his first recording "Four in the Morning". Also here is great recording of Fred Neil's "Reason to Believe" which used to be a standard among singer-songwriter type performers. The Youngbloods' music (and Young's subsequent solo work) was largely folk based, but incorporated rock, jazz, country, jug band, Brazilian, and blues influences. Listening to this reminds how much effort there was to experiment and synthesize different musical forms in the late 60s and and early 70s and how absent that is from the current, over-specialized music scene. Other than some contemporary jazz artists like Matt Jorgensen, it's difficult to think of people who really try to explore and blend different musical genres these days. The Youngbloods do a great job with others' songs, like the popular "Get Together". Their own compositions are stronger in terms of melody than lyrics. Overall, this is an enjoyable album and the remastering gives it new richness even for old fans.

D. P. Jestic
5.0 out of 5 stars Broad range of great songs, music, vocal
Reviewed in the United States on July 30, 2017
Verified Purchase
What a broad palette of music these guys--and Jesse Colin Young--put out. Great Americana / roots music that stands up today. Great musicianship and the interplay of twin guitars. Message music, fun rockers ("Grizzly Bear"), beautiful ballads ("Sunlight"), and some excellent jazzy/Caribbean-flavored creations! So glad I popped to get this one!
Read more
One person found this helpful
Helpful
Comment Report abuse

rgartee
5.0 out of 5 stars More extensive than a typical "best of" collection
Reviewed in the United States on October 6, 2014
Verified Purchase
This collection has 21 great songs by this group from the late 1960's.The Youngbloods only produced 3 albums before splitting up. Fortunately, the 3 LPs are still available. I purchased the Essential Youngbloods before purchased another CD set that had all three albums. If you want everything the Youngbloods recorded, I'd recommend "Youngbloods/Earth Music/Elephant Mountain" instead. If you just want the most popular pieces from this group then the Essential Youngbloods album will do.
Read more
4 people found this helpful
Helpful
Comment Report abuse

K. Stibolt
5.0 out of 5 stars The Youngbloods
Reviewed in the United States on June 2, 2020
Verified Purchase
What can I say? Love, Love, Love the Youngbloods. And this has some of their best songs!
Read more
Helpful
Comment Report abuse

Burt Y
4.0 out of 5 stars My folk music hero
Reviewed in the United States on August 13, 2013
Verified Purchase
Jesse Colin Young is one of my all-time favorite singer songwriters. Brings me back to my college dorm room and "hers".
I am more fond of the songs from his early days found on the mercury Label which seems to be unavailable. Four in the morning is so pure and sweet. Great retrospective. The later songs from Elephant Mountain are creative, funky and syncopated...outstanding. WONDERFUL BLAST FROM THE PAST.

Mr. J. Duthie
4.0 out of 5 stars Great album
Reviewed in the United Kingdom on May 6, 2015
Verified Purchase
I'm unsure of why Amazon titles this album as "Ride the Wind, the best of the RCA years" . This and a previous copy I had are both " Get Together: Essential Youngbloods", the only Ride the Wind album by the Youngbloods that I'm aware of is a live album. My discography makes no mention of an alternate title either.

Regardless of that, this is a fine album showcasing the talents of the band as a whole, although Jesse Colin Young's writing and performance shine thoughout.
Read more
Helpful
Sending feedback...
Thank you for your feedback.
Sorry, we failed to record your vote. Please try again
Report abuse

Bill Kinney
5.0 out of 5 stars Meaningfull
Reviewed in Canada on November 18, 2015
Verified Purchase
all your service and product absolutely wonderful. Thanks so much.
Read more
Helpful
Sending feedback...
Thank you for your feedback.
Sorry, we failed to record your vote. Please try again
Report abuse
Load more international reviews

john roman
5.0 out of 5 stars Five Stars
Reviewed in Canada on April 18, 2016
Verified Purchase
Recommended to all !!
Read more
Helpful
Sending feedback...
Thank you for your feedback.
Sorry, we failed to record your vote. Please try again
Report abuse

Stephen Jeffery
5.0 out of 5 stars Five Stars
Reviewed in the United Kingdom on July 3, 2014
Verified Purchase
Really pleased great album. What more can I say. An absolute bargain.
Read more
One person found this helpful
Helpful
Sending feedback...
Thank you for your feedback.
Sorry, we failed to record your vote. Please try again
Report abuse