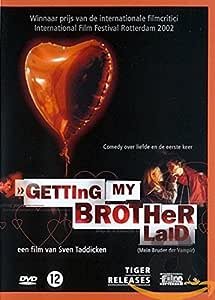 Netherlands released, PAL/Region 0 DVD: it WILL NOT play on standard US DVD player. You need multi-region PAL/NTSC DVD player to view it in USA/Canada: LANGUAGES: German ( Dolby Digital 2.0 ), Dutch ( Subtitles ), English ( Subtitles ), French ( Subtitles ), SPECIAL FEATURES: Alternative Footage, Cast/Crew Interview(s), Interactive Menu, Photo Gallery, Scene Access, Trailer(s), SYNOPSIS: Josh is about to turn 30; he's mentally retarded, and likes to play at being a vampire. His young sister Nicole is dealing with her impending womanhood; middle brother Mike is the 'normal' one, but in some ways the most childish - his latest conquest is Nadine, who runs the dog kennel at his security guard job. Nic is fixated on getting laid, and watches Mike and Nadine through the skylight with Josh. Josh also gets fixated on sex, though he has no clear idea what it's all about, and in particular on Nadine; to Mike's chagrin, she seems more interested in Josh than in him. SCREENED/AWARDED AT: Rotterdam International Film Festival, ...Getting My Brother Laid ( Mein Bruder, der Vampir ) ( My Brother the Vampire )