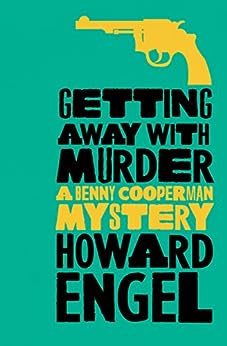 by Howard Engel (Author) Format: Kindle Edition
Book 9 of 10: The Benny Cooperman Mysteries
See all formats and editions
Sorry, there was a problem loading this page. Try again.
A PI is hired by a gangster marked for murder: “Benny Cooperman is . . . a lot of fun to hang out with” (Donald E. Westlake).

Benny Cooperman is a very effective detective—though he does get a little squeamish when things turn violent. He is snugly tucked in his bed in quiet Grantham, a Canadian town near Niagara Falls, when three unsavory thugs drag him out and present him like a trophy to notorious crime boss Abram Wise. Someone has made two attempts on the gangster’s life, and with no one else to turn to, he wants Cooperman to investigate.

In this novel from the Arthur Ellis Award-winning author, the colorful cast includes Wise’s two disgruntled ex-wives, an alluring supermodel, an irate foreign car dealer, and an eccentric retired librarian—as Cooperman finds himself entangled in more corruption, vengeance, and intrigue than one could ever imagine existing in a sleepy little village . . .

“Mr. Engel is a born writer, a natural stylist. This is a writer who can bring a character to life in a few lines.” —Ruth Rendell

Getting Away with Murder is the ninth book in the Benny Cooperman Mysteries, but you may enjoy reading the series in any order.

Next 2 for you in this series See full series
Total Price: $4.98
Books In This Series (10 Books)
Complete Series
The Benny Cooperman Mysteries
Kindle Edition
Page 1 of 1Start OverPage 1 of 1
Previous page
Next page

Howard Engel (1931–2019) was born in St. Catharines, Ontario. He was a producer for the Canadian Broadcasting Corporation before emerging as a prolific, award-winning, and much-loved mystery writer, best known for the Benny Cooperman detective novels. After suffering a stroke, Engel developed alexia sine agraphia in 2000, a condition that prevented him from reading without great effort. This, however, did not inhibit his ability to write, and he later penned a memoir about the experience and his recovery called The Man Who Forgot How to Read. Engel was a founder of Crime Writers of Canada, and in 2014, he was the recipient of the organization’s first Grand Master Award. He passed away in 2019 at the age of eighty-eight.

Three hoods abduct private investigator Benny Cooperman in the middle of the night and take him to see Abe Wise, Canada's most infamous unconvicted crook. Someone wants Wise dead, so Wise, using what has worked for him in the past, forces Benny to discover a name. Chief on the suspect list are Wise's two ex-wives (one alcoholic and one snobby) and two children (both spoiled), but Benny also interrogates Wise's old friend, his second-in-command, and a police contact. Pretty straightforward plotting, then, as well as direct prose, and a slight-but-steady whiff of Canadian atmosphere. A pleasant read for fans of the series.
Copyright 1998 Reed Business Information, Inc. --This text refers to an out of print or unavailable edition of this title.

Praise for the Benny Cooperman Mysteries

“The Cooperman novels are heavy on full-bodied characters, sharp dialogue, and rich humor. Benny just plain charms the socks off anyone he meets.” —Booklist

“Mr. Engel is a born writer, a natural stylist. This is a writer who can bring a character to life in a few lines.” —Ruth Rendell

“Engel can turn a phrase as neatly as Chandler.” —Julian Symons

“If there is a dean of Canadian mystery writers, it is Howard Engel.” —Maclean’s

Fans of the Canadian Jewish detective Benny Cooperman know that Benny's laid-back style is a great antidote to the posturing of the hard-nosed PIs so common in detective fiction. But just because Benny is a bit more gentlemanly than most doesn't mean he's a pushover. Gangster boss Abram Wise is well aware of that when he coerces Benny into finding out who is trying to kill him. Of course, big-time crime guys have lots of enemies, but Wise is convinced he's being targeted by someone he knows, and after taking a look at Wise's dysfunctional family, Benny seems to agree. The only thing that intrudes is a niggling suspicion about a murdered policeman and a sensational crime that took place long ago. Readers will zoom in on the villain a bit sooner than Benny does, but that won't kill their enjoyment in the story, which has enough complications to keep the pages turning plus an ending that brings everything together quite nicely. Stephanie Zvirin --This text refers to an out of print or unavailable edition of this title.

Having dispatched a trio of strong silent types to Grantham p.i. Benny Cooperman's bedside to get his attention and deliver him to a previously unannounced meeting, Abram Wise, Canada's greatest unconvicted crook, tells Benny that somebody's been making a series of attempts on his life, and that Benny is hereby elected to head the killer off. Who wants to see Wise dead? Only his two ex-wives, waitress Paulette Staples and teacher Lilian Wise; their respective children, underachieving Hart Staples and clotheshorse Julie Wise; and half the Ontario constabulary. But Benny's attention fastens instead on a 40-year-old murder case his friend McKenzie Stewart has just written up in a true-crime book: the conviction of Mary Tatarski, the next-to-last woman to be executed in Canada after a second unseen burglar fortuitously killed her mother five years after a first break-in left her father dead--an especially timely case to be ventilating again since Ed Neustadt, the retired cop who headed the investigation that sent Mary to the gallows, has just given McStu's book a big publicity boost by getting himself murdered. Benny's return (A Victim Must Be Found, 1988, etc.) is an amiable retro puzzler marked by endless rounds of Q-and-A with the unmemorable suspects, much of it clever but none of it believable for a moment. -- Copyright ©1998, Kirkus Associates, LP. All rights reserved. --This text refers to an out of print or unavailable edition of this title.

In his most baffling case yet, Benny Cooperman is snug in his bed in quiet Grantham, a town near Niagara Falls, when three unsavory thugs drag him out of bed and present him like a trophy to notorious crime boss, Abram Wise, "the biggest crook in North America who's never been to prison". Someone has made two attempts on the gangster's life and he wants Benny to investigate. An expert in offers you can't refuse, Wise convinces a reluctant Benny to take the case. --This text refers to the hardcover edition.
Read more

M. Levitt
5.0 out of 5 stars Howard Engel is so good!
Reviewed in the United States on December 14, 2013
Verified Purchase
Plus it kills me that Benny Cooperman isn't real. Some days I just can't stand this. I think his relationship with his parents is hysterical & his partents are SO FUNNY & I love his girlfriend. Sigh. Read this, OK?
Read more
Helpful
Report abuse
See all reviews