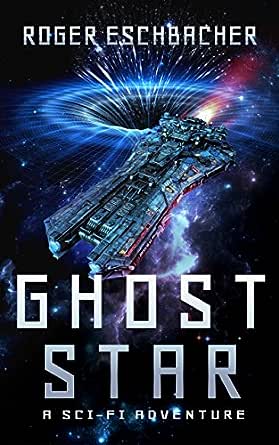 You've subscribed to Ghost Star Adventures! We will preorder your items within 24 hours of when they become available. When new books are released, we'll charge your default payment method for the lowest price available during the pre-order period.
Update your device or payment method, cancel individual pre-orders or your subscription at
Your Memberships & Subscriptions
There was an error. We were unable to process your subscription due to an error. Please refresh and try again. 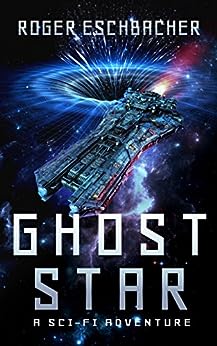 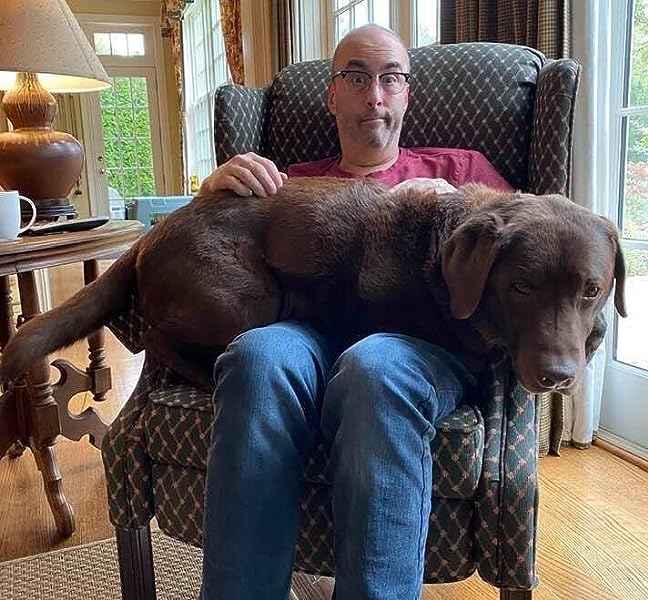 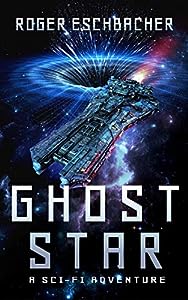 "Whether he's writing about Vikings, the Arthurian Court or outer space, Roger Eschbacher immerses his readers in his created world and makes it instantly believable." --Jaq Greenspon, writer, The New Adventures of Robin Hood

"Eschbacher delivers a science fiction adventure with well-constructed characters and perils galore. I'm a sucker for a great villain, and Ghost Star has that in the sinister Mohk. This yarn has pluck and bops along at a delightful pace." --Brian Clopper, author, The Powers That Flee and Ghost Coast

"A solid sci-fi tale with heroes you care about, a richly developed alien civilization, and a villain you love to hate." --Keith Robinson, author, Island of Fog

"Adventure, heritage, action, humour--this space opera more than lives up to the name. A thoroughly enjoyable tale by a true master story teller." --Scott Bury, author, The Bones of the Earth
"Ghost star is a cinematic gem waiting to be filmed. Roger Eschbacher gives us a fantastic space adventure with great characters and thrilling danger. It has a wry sense of humor as it delivers its terrifying and exhilarating tale of loyalty and revenge. Attention Hollywood, make this book into a movie!" --Tom Killeen, Fine Art and Special Effects Professional

Ghost Star is a YA novel of slightly under 52k words.
Q. Tell us about the cover and the inspiration for it.
A. My cover features Galen's spacecraft, the Ghost Star,exiting a wormhole. On the outside, the Ghost Star appears to be a beat-up smuggler's ship, but is that crusty exterior hiding something? Unseen, but lurking nearby, is Mael--a deadly black hole.
Q. This book is part of a series, tell us about your series.
A. I plan on making this a three book series. In the next two books, Galen will discover old allies and new friends -- eventually taking the fight to those responsible for his family's suffering. Wish him luck because he's going to need it.

An avid reader and book mobile devotee since he was a little kid, Roger Eschbacher lives and works in Los Angeles. In addition to writing fantasy and sci-fi adventure novels, he's also written children's picture books and is an Emmy-nominated TV animation writer.
Read more

4.3 out of 5 stars
4.3 out of 5
75 global ratings
How are ratings calculated?
To calculate the overall star rating and percentage breakdown by star, we don’t use a simple average. Instead, our system considers things like how recent a review is and if the reviewer bought the item on Amazon. It also analyzes reviews to verify trustworthiness.
Top reviews

Christine S.
4.0 out of 5 stars Fun Sci-fiction space stories!
Reviewed in the United States on January 19, 2018
Verified Purchase
Roger is great at simple wit, humor and making us chuckle. His children and Young Adult books are proof that making it fun to read, will keep his readers engaged to finish. As this is set to more of an adult level, Ghost Star is fast-paced, characters, names, and worlds, even the technology is quirky but simple enough to keep our interest. It is reminiscent of a buccaneer story. a bit of flash, dash, and in the end quashing the villain. While Mohk is a reprehensible alien being with an ego as large and dangerous as the Black Hole they are circling, in some ways, he is just pure evil, and maybe we as the reader audience don't care why he is horrible. But the other characters we begin to care about. The young captain who finds himself thrown into the battle for good vs. evil, whether he wants to run away or not, must fight to avenge his father and crew. He is thrust into a job he might have wanted or dreamed of as a youth but now is forced to be "All He Can Be". He discovers something frightening and perhaps intriguing about his family, and that too must keep him straight on his goal, and begin to rely upon his newly discovered skills, and a bevy of people who have placed their trust in him.
Roger does a good job of bringing together a somewhat familiar plotline done by many others, but perhaps not as engaging or charming as his work. His science is easy, not Arthur C. Clarke or Asimov, or Crichton science for the genius minded or the string theory physicists, but easily entertained and understood. I look forward to more entertaining stories by Roger and hopefully with the setup for more with the intrepid crew of the Ghost Star.
Read more
4 people found this helpful
Helpful
Comment Report abuse

Stacie Eirich
4.0 out of 5 stars Entertaining Sci-Fi Adventure for Fans of Star Trek & Firefly
Reviewed in the United States on January 18, 2018
Verified Purchase
Ghost Star, by Roger Eschbacher, is an entertaining science fiction adventure. The first book in a planned trilogy, it serves a plot filled with interstellar action and a side of humor.The protagonist, a young man named Galen Bray, is the captain Ghost Star - the spaceship that the book is named after. An underdog that readers will want to root for, he sets out on a mission to save his younger sister, Trem, from the evil alien commander who captured her and killed their father. Along this galactic journey he will, of course, face challenges, uncover mysteries - and learn his own destiny, which may not be what he imagined. Though I'm rarely a science fiction reader, I have enjoyed watching shows like Star Trek: The Next Generation and Firefly in the past - both of which this story reminded me of. It has both a classic and contemporary science-fiction/fantasy feeling to it, and will likely appeal to fans of both. An enjoyable read with action, humor and an intriguing space opera - Ghost Star was a surprisingly good read for me.
Read more
3 people found this helpful
Helpful
Comment Report abuse

Mutive
4.0 out of 5 stars A Fun, Light Read
Reviewed in the United States on November 24, 2017
Verified Purchase
Anyway, this was reasonably fun, light read. In it, an orphaned alien goes on an adventure to discover his origins.

I really liked the world building, although felt like the aliens perhaps weren't quite alien enough. (Maybe because I read a lot of science fiction, so tend to like my aliens *really* weird.) I also felt like the plot was maybe a bit simple.

I agree with another reviewer that this is probably a book in many ways better aimed at middle grades than adults (perhaps the reason I'm not a super huge fan). But it definitely makes for an entertaining, light read.
Read more
4 people found this helpful
Helpful
Comment Report abuse

JP Mac
4.0 out of 5 stars Action Drives Fast-Paced Space Opera
Reviewed in the United States on January 16, 2018
Verified Purchase
Young Galen Bray faces trouble by the gross. Pursued by the murderous alien Mohk, he pilots his space craft down an interstellar rabbit hole only to discover a lost civilization, his past and his destiny.

This book seemed designed for younger readers, with some of the characters a tad thin. Also, the familiar archetypes peopling this thriller might've been tweaked to separate them out from the usual space opera tropes of warrior women, clever robots, and evil-for-evil's-sake villians.

Nevertheless, the story's alien characters and locations are well-handled by the author who keeps his world accessible to the reader. In addition, there's action aplenty, a likable protagonist, droll humor and enough twists to keep the narrative speeding along. A fun, enjoyable read.
Read more
2 people found this helpful
Helpful
Comment Report abuse

R3
4.0 out of 5 stars Ghost Star
Reviewed in the United States on December 6, 2017
Verified Purchase
This sci-fi book has less world-building than most books of this genre that I've read, but it has enough to keep the story interesting. This isn't necessarily a problem because the worlds of sci-fi novels can sometimes be so complex they are difficult to understand. This one is straightforward and more of a fast-paced adventure than it is a discovery of the world beyond ours. Even most of the species are human-like. I found it humorous, although at times humor didn't seem to fit the tense, serious situations the characters found themselves in. It's a quick read and entertaining. Although the story is complete in itself, it does end on a cliff-hanger to whet your appetite for the next book.

I received a copy of this book through the Kindle Scout program.
Read more
2 people found this helpful
Helpful
Comment Report abuse

Amazon Customer
5.0 out of 5 stars Bring on your next Vacation. Good light reading!
Reviewed in the United States on January 7, 2018
Verified Purchase
"Ghost Star" is a fun enjoyable book and I ( after taking a HS class in SF which killed my liking the genre, making it hard to enjoy any SF book) enjoyed it very much. After all, we are all finding out where we come from and that is a good subject for a book. Also plenty of action to please you and no politico stuff to get you angry. It's just a great fun book!

Good reading for a holiday vacation, or whether you wander among the cosmos ...or the neighborhood. Looking forward to more from Roger!
Read more
3 people found this helpful
Helpful
Comment Report abuse

Carole
5.0 out of 5 stars Fun, clean entertaining science fiction-fantasy story!
Reviewed in the United States on December 23, 2017
Verified Purchase
A fun, fast-paced space story. Likeable characters, interesting story line without explicit language or gratuitous sex (always worth extra stars in my book)! Although the author didn't spend extra time on in-depth character development or descriptions, it didn't detract from the story. My one disappointment (but not enough to take away a star) was the fact that there were a couple of loose ends that didn't tie up the book completely - hence the need for a sequel. But since I enjoyed the first, I'm looking forward to the sequel. Now it's just a matter of time before it's available...
Read more
2 people found this helpful
Helpful
Comment Report abuse
See all reviews