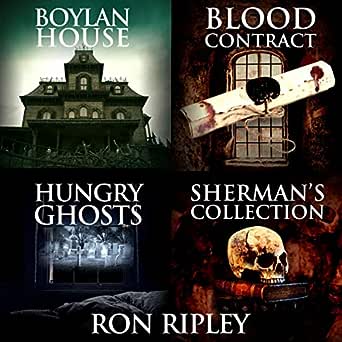 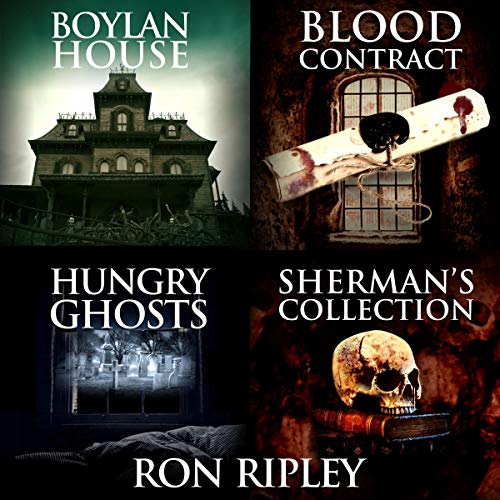 Natalie @ ABookLoversLife
VINE VOICE
5.0 out of 5 stars Brilliant collection.
Reviewed in the United States on July 10, 2019
Verified Purchase
Boylan House:
There is a house in nearly every town that stands abandoned and just left there. Well, the Boylan house is one of them! It has stood for centuries on Meeting House Road, New Hampshire. It's a house no-one dares to enter, and if they do, they usually don't come out. Also every year, around Halloween, boys seem to go missing in or around the house, never to be seen of heard from again. Just what is going on?

Well, Mason Philips is intent on finding out what is going on. When he was a boy, on Halloween, himself and his friend decide to call to the house on a dare. Mason swears that a trap door opened in the roof and something pulled his friend into the house. Nobody believes him though and he goes through life remembering the house and wanting to see if it was just a young boys imagination. He goes back to try to find the truth, and what he unravels was shocking.

This was awesome!! So creepy and scary and perfect for this time of year!! This is the type of book that would work well read at a camp fire. They are perfect little bite sized bits of spooky.

Character wise, I really liked Mason. He has always thought about the house from his childhood and is finally in a position to find out more about it. During his research, he meets a lovely librarian, a police officer that is willing to help, and even his estranged Uncle, who has already dabbled with the house and the evil within. This ragtag group of people may just get to the bottom of what lies within the house.

Plot wise, it's a really short read but packed with chills, thrills and enough of a spooky atmosphere that it will keep you on the edge of your seat. This author is fast becoming one of my go to ones for a short scary read! He knows how to tell a great story.

Blood Contract:
I didn't read the summary, or any reviews of this before starting it, I just saw who the author was and dived in, and I have to say that it was not at all what I was expecting!! For the first few pages I thought this would be the typical haunting, but it's not!! There was an awesome twist to it that I loved and I'm so glad I went in knowing nothing because I was giddy when I was reading it.

The plot was fast paced, intense and all round full of awesomesauce!! The basic premise is that the Blood family has owned property in the town of Thorne for generations. The family gave some of the land to the town but a contract was written up expressly forbidding the town to encroach upon the only land the family kept. All was well for generations, until the town decided to develop on the land. With the contract breached, the Blood family can not rest, but you will need to read the book to figure out why!!

In all, a book that truly surprised me and one I highly recommend.

Hungry Ghosts:
Connor Mann saw something when he was a child and it caused him to be put into psychiatric ward for more than a decade. It's now time for him to be released and he is anxious about going home. His mother is dead and his father is an abusive drunk. He tries to live a normal life but when he sees something from his childhood and gruesome murders are happening in the cemetery across from him, he realises that his life will never be normal. With the help from a neighbour, Connor needs to get to the bottom of what is happening before it's too late.

Pot wise, I really enjoyed learning about Chinese Ghosts and the difference between them and the normal Ghosts. The lore was fascinating and I ended up Googling them. The pacing of this was fast paced and really creepy, especially when the Ghosts would say that they were Hungry!!! It gave me chills. I was also glad to see a twist on the normal Ghost books this author has written.

I liked Connor. He saw his mother being killed by a Ghost and was put into a psychiatric ward for a lot of his life. He is now out and finding it hard to adjust. When the Ghosts try to kill him, Mister Hu is the only one he can turn to, because Hu believes him. Connor, despite his faults, is willing to do whatever he can to stop the Ghosts.

In all, this was an exciting, new and entertaining book. I loved seeing the flashbacks at the end of the book, and I'm really looking forward to seeing what is next for these characters.

Shermans Collection:
This is one of Ron Ripleys' earlier works and after reading some of his more recent ones, you can tell he has evolved tremendously as a writer!! Still though, this book was well written and developed and I loved it.

The plot is fast paced and doesn't let up. When Mr. Sherman dies, his one stipulation in his will is that when his house is sold, nothing from the Library can be removed. The new owner has to agree to this before they can buy the house. Charles Gottesman doesn't see a problem with this so he eagerly buys the house. But before he can move in, items from the Library are stolen and it doesn't take long for Charles to realise how important Mr Shermans request was.

I think I see where the author got inspiration for his amazing Haunted Collection Series!! This is similar though not as expanded as the Haunted Collection Series. I loved finding out about the objects and what was haunting each. Also the buyer of the sword was creepy and I would love to have seen a bit more on him. As with all this authors work, he has created a creepy and spooky set of circumstances that the characters have to deal with, and I loved every bit of it ;) I listened to this in a little over a day because I needed to see what happened next.

In all, this is a well written and quick read. It has given me a hankering for re-reading the Haunted Collection Series!

Chris_1200
5.0 out of 5 stars You get more than your $1 worth
Reviewed in the United States on September 2, 2019
Verified Purchase
I usually don’t have very high expectations for these kinds of heavily discounted book collections, but this one was interesting and fun. The stories are more like ghost adventures, rather than hauntings or supernatural horror, and the reading level is only YA, but that kept them from being bogged down with heavy-handed attempts to build atmosphere. I didn’t like the “Hungry Ghosts” story because it didn’t end, it just sorta stopped.
My only strong complaint is that ever story ends, but then tells a series of background “prequel” chapters. The stories would have been better with the prequels worked in either at the beginning, or woven into the narrative.
Read more
4 people found this helpful
Helpful
Comment Report abuse

Willa Woodfin
5.0 out of 5 stars Horror At It's Best
Reviewed in the United States on January 19, 2020
Verified Purchase
I wasn't familiar with Ron Ripley's book's. However, I am now considered a fan. Your style of writing paints a very clear picture of each character. The stories were some of the best horror stories that I have read in years. Can't wait to read more of your work.
Read more
2 people found this helpful
Helpful
Comment Report abuse

Teresa
5.0 out of 5 stars Good scares
Reviewed in the United States on September 28, 2019
Verified Purchase
Loved these scary stories. we're well written and worth the time to read them. I couldn't put them down till I was done with the whole book.
Read more
2 people found this helpful
Helpful
Comment Report abuse

TA
5.0 out of 5 stars Fantastic series
Reviewed in the United States on September 8, 2019
Verified Purchase
I have read many of Ron's books and he has become my new favorite author since Stephen King. He keeps you spell bound and you become engrossed in the characters. Best series
Read more
2 people found this helpful
Helpful
Comment Report abuse

Pamela J Lucarelli
2.0 out of 5 stars Nothing really frightening about the stories
Reviewed in the United States on August 22, 2020
Verified Purchase
Quick reading, other than the extra, extra deleted chapters. The first wasn't too bad except it could have built the characters up more.
Read more
Helpful
Comment Report abuse

silvermaneSF
5.0 out of 5 stars very good read
Reviewed in the United States on August 18, 2020
Verified Purchase
the only thing i disliked was that it was too short, one of those books you want to go on and on
Read more
Helpful
Comment Report abuse

frances jimenez-Valdez
5.0 out of 5 stars Great Horror Books
Reviewed in the United States on July 25, 2020
Verified Purchase
I enjoyed the attention to detail in the stories, it made me feel like I was there. I enjoyed the second story the best because of all the different types of monsters. Keep it up its really hard finding good horror stories.
Read more
Helpful
Comment Report abuse
See all reviews

Eddy
5.0 out of 5 stars Actually is very scary
Reviewed in Canada on October 8, 2020
Verified Purchase
I don’t scare easily and these stories, while not all really scary, certainly did hold my interest. The last one, for example, ended way too soon and left me wanting more.
Pretty impressed for one of my old and jaded age.
Read more
Report abuse

Georgette Dryden
5.0 out of 5 stars Loved this book, kept me awake under my blankets . But definitely not the usual cheap scares.
Reviewed in Canada on August 21, 2020
Verified Purchase
I'd recommend this book to anybody that enjoys a more complex scare. I'm following this author in expectation of many late nights huddled up under my blanket reading the latest scare.
Read more
Report abuse