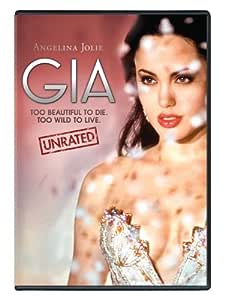 Secure transaction
Your transaction is secure
We work hard to protect your security and privacy. Our payment security system encrypts your information during transmission. We don’t share your credit card details with third-party sellers, and we don’t sell your information to others. Learn more
Details
Ships from
Amazon.com
Sold by
Amazon.com
Gia (Unrated Edition) has been added to your Cart
New & Used (38) from
$1.87 + $3.99 shipping

It's the Late 70's in New York - Studio 54, designer jeans, drugs and disco. One girl is living life in the fast lane. She can have any man or woman she wants. Sex, money, glamour, fame - it's all within her reach. She's a Goddess. She's A Star. Her name Is Gia.

4.5 out of 5 stars
4.5 out of 5
1,892 global ratings
How are ratings calculated?
To calculate the overall star rating and percentage breakdown by star, we don’t use a simple average. Instead, our system considers things like how recent a review is and if the reviewer bought the item on Amazon. It also analyzes reviews to verify trustworthiness.
Top reviews

villainsrule
1.0 out of 5 stars didn't help me with my research
Reviewed in the United States on August 18, 2019
Verified Purchase
I like Angelina and I am currently researching celebrities, models, and such so I watched this thinking I'd get some insight into the modeling industry, this is basically porn, lesbian/gay porn at that which wasn't necessary. It was pretty boring and it kept reshooting the same scenes but different angles and focusing way too long on nude lesbians touching each other. The entire time I'm thinking "Why?", I had to fast forward so many scenes and the funny thing is, I didn't miss anything. for the story, I felt very frustrated as it's like, this Gia girl was very popular and got work and could have been great and successful but for some reason, ended up using drugs and becoming addicted and just acting out, being childish and immature and not taking her job seriously, instead just taking drugs, destroying her body, getting a bad rep and loosing work. So frustrating, I can't understand why anyone would use drugs, the drugs ruined her and caused her to get a disease and die from it. very sad. She had a nice life but for some reason done drugs, I just don't get it. what a waste. But anyway, the movie was too focused on the sex stuff, failed to have good music, visuals and a good immersive storytelling. I didn't feel much for the characters, which is not good because I will never watch this again. I don't know how much of this movie is factual but I feel they made Gia out to be a crazed, air headed, sl**y immature little girl who was scared deep down. Very sad that she died.
Read more
8 people found this helpful
Helpful
Report abuse

mickie gee
5.0 out of 5 stars speaks for itself.
Reviewed in the United States on April 24, 2020
Verified Purchase
no one could have played gia better. if anyone was going to play her it could only have been Angie. just so you guys know, the fence scene with Linda was a real documented night and Linda still has some social media where she reminisces once in a while. Gia was raw talent if you consider having a certain atmosphere about you talent -- I certainly don't believe just anyone has that. I think they picked Angie because she does have that about her. an unmatched energy in any room she's in or set she's on, and for Gia's time Gia was Somebody.

unfortunately I understand the ins and outs of the drug world and the toughs of recovery and it's not pretty, not any of it. but it was less cared for or understood then and by the time she got some alright help it was too late. her journal entries tell the story the way her soul (and/or her subconscious, depending on what you do or don't believe) felt it happening before during and after it all. I believe if there is somewhere else, she's there, and if not, at least she's finally out of pain, and is remembered far more for who she was than what brought her down.
well like she said, there's much more for her, just not in this life.

I think the film illustrated it all beautifully, especially with the use of her journals, because she got to speak for herself, which not many people get to do once they're gone, especially if their career was a model. there was something so special about her. one of my favorite films, I've seen it a thousand times just never on Prime so I had to leave a review once I did watch it here. obviously I highly recommend.

NOT FOR KIDS. the lesson however, is.
Read more
6 people found this helpful
Helpful
Report abuse

Morgan V. Madison
4.0 out of 5 stars Film that made Angelina Jolie famous.
Reviewed in the United States on March 12, 2019
Verified Purchase
Really good film. Strong R rating. Based on the biography of model Gia Carangi "Thing of Beauty."

Gia was a young woman from Philadelphia who had a long history of drug abuse before she broke into the New York modeling world at a time when it was dominated by Eileen Ford who wanted models that looked like her - light eyes and blonde to light brown hair with fair skin. Ford wouldn't have hired a Cyndy Crawford.

Gia was a brown-eyed brunette with a European look and became very successful for a while working for Wilhelmina.

She was openly gay at a time when people were reluctant to be out of the closet, but stereotypes about what a lesbian were a challenge.

The money she earned gave her access to all the drugs she wanted, and she became badly addicted to heroin. Her life spiraled out of control.
Read more
11 people found this helpful
Helpful
Report abuse

Sammy Dude
2.0 out of 5 stars Realistic Acting by Jolie?????
Reviewed in the United States on January 29, 2019
Verified Purchase
Angie did the lesbian thing, and the heroin thing, and when she's on the red carpet, she's basically on the catwalk, so where is this realistic acting everyone keeps pontificating about? It's a movie about an in-your-face-marginally-pretty Philly girl who makes it in the high stakes modeling biz. She's needy, she's spoiled and self-centered. Why does it take a life threatening disease to make her a humble human? I was left feeling empty after this one. If you want to see Angie's rack prior to a full mastectomy then this is your film.
Read more
4 people found this helpful
Helpful
Report abuse

Toodles
5.0 out of 5 stars It will break your heart. Watch it anyway.
Reviewed in the United States on November 23, 2018
Verified Purchase
I remember when HBO aired this movie. I wanted it but never got it. I found it on here by accident & had to have it. I love movies based on the lives of people I'm already interested in. Gia was talented and beautiful, she also dealt with her own troubles and insecurities. I doubt anyone could play this part like Angelina. She was so believable until the very end. Love this movie.
Read more
4 people found this helpful
Helpful
Report abuse

Mahogani
5.0 out of 5 stars Amazon Prime has Officially Won Me Over
Reviewed in the United States on September 3, 2017
Verified Purchase
I've been looking for this movie for years! Waiting for it to appear on Netflix or Hulu. I recently discovered that Prime Video was included with my membership and realized that I could search for it here. Low and behold its available! I've been wanting to watch this for IDK how long. Along with having every season of Suits available, Prime Video has OFFICIALLY won me over! I am so happy right now!!
Read more
8 people found this helpful
Helpful
Report abuse

A. Wellings
5.0 out of 5 stars Love it!
Reviewed in the United Kingdom on August 5, 2020
Verified Purchase
Really good! Angelia is a tour de force!
Good cast! Too!
Read more
Report abuse

R. Cunningham
4.0 out of 5 stars gia
Reviewed in the United Kingdom on July 11, 2015
Verified Purchase
A sad film but I enjoyed watching it
Read more
Report abuse