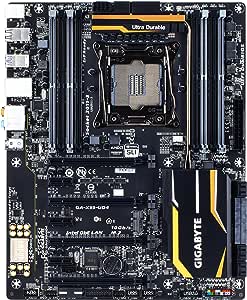 Visit the Gigabyte Store
3.2 out of 5 stars 26 ratings
| 11 answered questions
Available from these sellers.
See more

No Refunds, all sales are final.

3.2 out of 5 stars
3.2 out of 5
26 global ratings
How are ratings calculated?
To calculate the overall star rating and percentage breakdown by star, we don’t use a simple average. Instead, our system considers things like how recent a review is and if the reviewer bought the item on Amazon. It also analyzes reviews to verify trustworthiness.
Top reviews

daniel raiche
1.0 out of 5 stars Worst Gigabyte MB I've used to date
Reviewed in the United States on November 12, 2015
Verified Purchase
Worst Gigabyte MB I've used to date. The BIOS is all messed up, can't boot and loses it's brains every few months. Sad to say that my love for Gigabyte and their support has gone. If anyone gets this MB stable for more than a month, please let us know how you did it!
Dan - 35 years Computer Systems Engineer.

K. Edgington
3.0 out of 5 stars Overall a nice piece of kit, but I have issues with M.2 support at this stage of the game.
Reviewed in the United States on March 17, 2015
Verified Purchase
So far I have had little to no problems with the general operation of this mobo. However, it comes with an M.2 slot on the mobo, which allows you to connect a M.2 wifi card and/or a M.2 SSD. I ordered an Intel 7260NGW wireless-ac card which adheres to the M.2 form factor, but cannot for the life of me find the cables that are needed to go from the little MHF4 sockets on the card to the little bracket on the back of the motherboard. Gigabyte puts the bracket on the motherboard but does not supply the cables needed to connect the wireless card to the antenna - both purchased separately.

The cables needed are MHF4 to RP SMA male, about 8 inches long. It has taken a lot of research to find this out, and I've already ordered two sets of cables that were wrong. So far I have not been able to find the cables, and Gigabyte does not sell them. However, they come with the G1 Gaming version of their motherboards! Gigabyte customer support was very courteous and attentive, but they were not able to help me procure a set of cables that work. In fact, I even ordered a set of cables through Amazon from a link that was provided by Gigabyte, and those cables did not fit. They had an MHF1 connector on them, which is giant in comparison to the MHF4. I still have an open ticket with Gigabyte regarding this issue.

So be warned. If you plan to use this board with the Intel 7260NGW wireless-ac card (M.2, also known as NGFF, or Next Generation Form Factor), you will have to find a supplier for the cables that provide connectivity from the card to the rear-mounted antenna, which you will also need to purchase separately. Good luck!

Other than the M.2 problem, which would have been a deal breaker had I known about it before purchasing, this seems to be a very feature-packed mobo. I am running two NVidia GTX 970 G1 Gaming graphics cards in SLI, an i7-5820K CPU, and 16GB of Corsair Vengeance LPX DDR4 2666MHz RAM, and it is a screamer. I use a Samsung 500GB SSD, which is a game-changer when it comes to perceived performance gains. The BIOS in this board had stability issues in earlier revisions, but the latest revision is very stable and the board I got had the latest BIOS version installed. There are also many overclocking provisions within the BIOS for those people who want to squeeze more performance from their gear, but this board is only for the Haswell-E Intel chips, which are brand new, so there really shouldn't be much "need" to overclock yet. I'm currently running both my CPU and graphics cards at stock speeds and have no issues whatsoever maxing out the settings in any new game, while driving three 27" monitors at a resolution of 6000 x 1080p.

Jeremy M.
5.0 out of 5 stars great motherboard for the price
Reviewed in the United States on February 23, 2015
Verified Purchase
Built a nice system using and i7 5820k Haswell-E and a gtx 970 G1 gaming card and this board makes it easy to overclock. I read several reviews about people getting stuck in boot loops and other crazy things but I did not have any of these issues. (Make sure your memory is seated in the slot that could be your boot loop issue). Over all the motherboard runs great, looks great, and is easy on the budget. Very happy customer
Read more
8 people found this helpful
Helpful
Report abuse

jay
1.0 out of 5 stars System doesn't start; support tells me to contact them via Facebook !
Reviewed in the United States on February 17, 2015
Verified Purchase
I bought this board with great hopes for a screaming system. I finally had some money to build something nice, so I followed the recommendations on the Logical Increments (logicalincrements.com) website and waiting for my gear to arrive. I live out of the country, so it took a few weeks to get everything brought to me since I can't ship directly here.

I spent a great Saturday building this and was super happy to start it up. DDR4 RAM, SSD Drive. Woo hoo.

Latest drivers, latest BIOS (F12). Everything up to date. Everything (even the power supply, 850W) tested in another machine.

The problem is that the system just randomly restarts. Click, reset and restart. After a few minutes or after a few hours. I had 2 days of uptime once. After that, I needed to reset the BIOS physically by shorting a few pins on the MB. No prior notice. Nothing in the Windows Event logs - just notice that the previous restart was unexpected. Nothing in the BIOS. What a stinker.

First, I tried with EVGA power supply support and we proved that the power supply was fine in another computer. Their support was awesome.

So, i tried Gigabyte support and ended up opening two cases (ticket 104899, 106525). Because I'm out of the country, I was directly to Latin America support, who answered me in English and told me to open a case via Facebook. Yes, Facebook. Of course, Gigabyte didn't answer.

I'm open to suggestions from anyone out there about how to fix it, or what I can do with a useless, $250 piece of silicon

Oh, and Amazon tells me that I've exceeded the return window (it took a while to get someone to bring it to me, so mea culpa, I guess.)
Read more
5 people found this helpful
Helpful
Report abuse

Stephanie Corley
1.0 out of 5 stars Random hardware for a vendor that does not offer support.
Reviewed in the United States on March 3, 2015
Verified Purchase
Gigabyte makes multiple versions of this motherboard with different support for different hardware. There is no way of knowing what version you will get till you open the package and look for small numbers printed directly onto the motherboard. The technicians at the techsupport do not know what hardware will or will not work with some of the boards and would not offer any assistance after i purchased hardware that they advised me was compatible if I used the Beta bios.

The board occasional refuses to boot and instead sits in a boot loop before the bios even loads until i remove power from the pc and try to turn it on again. Occasionally the USB ports don't work on boot. Of course you dont know this till the computer is fully booted and the devices connected to them just seem to have dissipated from the computer. My keyboard and mouse are USB so i had to pull the power cord to correct that to.

Always gave me errors and would not boot when i used a high end Nvidia GPU (pcie 16x, not is SLI or anything.). Had to drop down to a mid range card to get it to boot. Took days for me to get support to tell me that they just did not support all of Nvidia's cards on this board. Now i have to wonder when i try to upgrade GPU's if the better card will work or not.
Read more
2 people found this helpful
Helpful
Report abuse