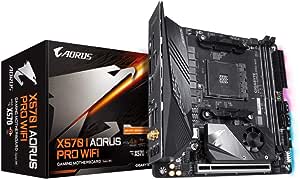 4.5 out of 5 stars
4.5 out of 5
164 global ratings
How are ratings calculated?
To calculate the overall star rating and percentage breakdown by star, we don’t use a simple average. Instead, our system considers things like how recent a review is and if the reviewer bought the item on Amazon. It also analyzes reviews to verify trustworthiness.
Top reviews

Jeremy H
5.0 out of 5 stars Probably the best value X570 board
Reviewed in the United Kingdom on August 12, 2019
Verified Purchase
I've paired the board with a Ryzen 3700X and 32GB of Crucial Ballistix LT 3200c16 RAM - the board makes overclocking the RAM a doddle, and I've managed to get the RAM working at 3600c16 by changing 2 bios settings.
Nowadays, most end-users will only have one add-in card...the GPU, so being ITX sized, one can build a powerhouse with a very small footprint, which is what I intend to do - forgive the pictures of the test bench (work-in-progress)

GOOD:
1) The board has very beefy VRMs with a 6 phase 70A setup - which is better than a large majority of the X570 range even when compared to other board manufacturers
2) Intel WIFI and Intel GbE ethernet connections, and a decent WIFI antenna - surprising how many manufacturers cheap out on this!
3) Top of the range Realtek ALC 1220-VB audio codec
4) USB type C port
5) Now I'm not one for RGB bling bling, but the board has tastefully done the RGB lighting and it's not too garish/in-your-face
6) For an ITX board, it also has all the features of its larger ATX brethren, such as support for two NVMe M.2 drives, which is always a bonus
7) The board also has CPU-less BIOS flashing which is always a big help should one feel the need to upgrade to the next generation of Ryzen processors in future
8) Lastly, and also most importantly, Gigabyte has a UK based RMA service with a very good reputation within the overclocking community, so if it ever goes wrong, I know it shouldn't be a hassle to get it sorted (unlike ASUS).
9) (Support for PCIE 4.0)

MEDIOCRE:
1) The X570 chipset has a fan - but basically all of the X570 range except the halo-tier boards have a chipset fan. Initially, I had reservations about it, but it is honestly not that noisy, and I cannot hear it spinning above my Gentle Typhoon fans. But that being said, it is an extra potential point of failure.

BAD:
1) The price. Yes it is expensive compared to the X470/B450 range, but X570 is meant to be a tier above. Essentially, you get what you pay for. Some will see this as a negative, some won't.

My thoughts:
I personally think that the Aorus X570I PRO WIFI is the best value X570 board available.

Terry
2.0 out of 5 stars Advanced users only for this Crash Magnet board that needed much more QA
Reviewed in the United Kingdom on October 23, 2019
Verified Purchase
First, a bit about me. I have a degree in Computer Engineering. I have a long track record putting together windows and linux PCs from components. My first was a Pentium 90. I was a paid Systems Administrator for four years. Now I am a programmer.

So when I say this motherboard is a challenge I mean it.

This board will BSOD all the time. You will have to go on forums and try to decipher what action to take because it may be the processor, the ram, the drivers, the version of the drivers, or the bios version or the motherboard.

So I had to ditch the drivers that Aorus / Gigabyte ship on the CDROM and go for AMD drivers instead. This made the BSOD less frequent

The BSOD did keep happening so more forums searches and a lot of MemTest86 runs.

Eventually I deduced my older ram was fine ( no errors on MemTest86 ) but the motherboard did not work well with the RAM.

I had to update the BIOS from what was shipped on the board (F2) to F6. This was to cater for my older RAM sticks which I kept from my old motherboard. Updating the bios is always a fraught, difficult process, so it is a shame most users will have to do this.

After a few days testing on F6, no BSOD so far.

2/2) The NVME drive is literally hidden away

There are two M2 NVME slots. However the one you can see underneath the board... is not the main one

The main one is hidden under a cooling fan section next to the processor slot.

The manual does not make it clear that you have to unscrew the cooling fan to install the M2 drive.

Seriously, an ikea style 1,2,3,4 sequence of photos would have been easy for them to put in the manual. Instead you are left trying to cross check with a 2D CAD drawing which shows more of a PCB layout simplified view
Read more

Amazon Customer
4.0 out of 5 stars Brilliant Board, But watch out for Bios Version
Reviewed in the United Kingdom on March 9, 2020
Verified Purchase
If you want an up to date and future proof mITX Motherboard, this is the one to go for, with PCIe 4.0 and RGB compatible where you can set your own LED lights using strips and case fans.
However be aware of the Bios Version, if your is like mine which is Version F3, i would advise to update it immediately that fixes all the bugs and compatibility issues.
Thankfully you can update it directly through the bios using the dedicated white USB slot on the motherboard without going into windows and its surprisingly dead easy to update
(Make sure you download the update on your old or another computer and put it on your USB Stick)
If it wasn't for the initial issues it would have been a 5 star however once bios had been updated it has been trouble free and still worth going for
Read more
One person found this helpful
Report abuse

Amazon Customer
5.0 out of 5 stars Aorus X570 I + Ryzen 9 3900x
Reviewed in the United Kingdom on December 5, 2019
Verified Purchase
Great little board with 570 chipset and support for PICE 4 - I have a Ryazen 9 3900x running very nicely with 32GB of 3200 RAM and a PCEI 4 M.2 SSD in a Phanteks Evolv ITX case - Its fast and stable with low temps. Be careful what cooler you choose for your CPU due to limited space. A water cooler is probably the way to go.
Read more
One person found this helpful
Report abuse
See all reviews