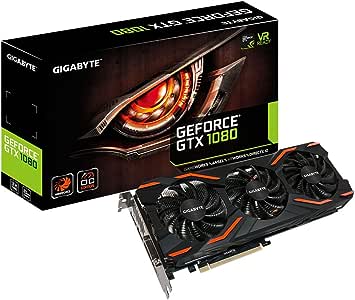 4.4 out of 5 stars
4.4 out of 5
884 global ratings
How are ratings calculated?
To calculate the overall star rating and percentage breakdown by star, we don’t use a simple average. Instead, our system considers things like how recent a review is and if the reviewer bought the item on Amazon. It also analyzes reviews to verify trustworthiness.

CECILIA R.
5.0 out of 5 stars Big Bess
Reviewed in the United States on March 6, 2017
Style: GTX 1080 G1 GamingVerified Purchase
So far so good, this beast can alone run most of todays modern games at 4k 60fps with high settings and AA off or low (which really doesn't make a difference due to the abundance of pixels), games that were released before 2013-2014 will run at 4K with ease.

Power Consumption - It only haves an 8 pin conector, i was worried about this but no more, i managed to OC this to 2,114MHz and sustain stable gaming consistently, while OC i up the voltage for a stable functionality. As other 1080s, it consumes 180W, and can go up max to 225W.

Temperatures - Right to business, on full load and with overclocked settings, max Temp i've seen is 70C, which is pretty good considering max temp she can handle is 93C, still, always make sure it doesn't go 75C for durability reasons. On idle, fans hover around 30% maintaining 35-40C temperature.

Performance - This card slaughters 1080p ultra, slaughters 1440p on ultra too. To achieve 4K 60 FPS, you must tweak and play with the settings. Use MSI afterburner and while playing, check for GPU usage, tweak your settings until you see the GPU usage hovering 85-95% usage which will result on the best image possible she can give you while maintaining solid 60 fps. Keep in mind 4K is lots of pixels so don't worry about sacrificing some settings in order to achieve stable FPS, believe me, it won't make a noticeable difference, go with low or medium Anti-aliasing depending the game, ambient occlusion is the only settings that at 4K really hammers the GPU, this setting is noticeable because it gives the image a better contrast between lights and shadows, but it really depends whether you want more fps and your taste in graphics quality. Be aware that in 4K drops will occur rewardless for the settings you select, to achieve 4K 60FPS on ultra, go with SLI the you won't have to worry about nothing.

Things to consider for novice gamers:
- Know that you'll need a good CPU that is able to keep up with the GPU demand so you can prevent a bottleneck. I currently use a 6700k OC to 4.4GHz and it reaches 65-70% usage when playing games like Watch Dogs 2 at 4K and Mafia III at 2K, all the other games i've played stay below 50% cpu usage.

- Case must have good ventilation and airflow to dissipate heat.

- Make sure the card is well attached to mobo's slot, lot of users have complained that their socket was damaged due to GPU weight.

- Don't OC GPU unless necessary, given it more unnecessary juice will result on drivers crash and GPU malfunction.

- Always monitor your system temperatures when playing at high resolutions.

Jonathan Kagan
5.0 out of 5 stars Great card that keeps cool under stress.
Reviewed in the United States on September 8, 2017
Verified Purchase
If you're looking for a high range gtx 1080 and have a large enough case, this is a fantastic card for the price. The card is massive, but feels sturdy and secure in my case. The LEDs are nice, but I don't really care about them. The card performs extremely well for 1080p 144 hz gaming at high/ultra (depending on the game). For 144 hz gaming, I would recommend a gtx 1080 over 1070 in order to still play at ultra settings.

The card, in my case (fractal design define r4) rarely goes above 70 C even at max load. I don't have a g sync monitor, but I don't get any noticeable screen tearing if I limit my fps to match my monitor refresh rate.

Can't go wrong with an extended 4 year warranty. I know EVGA has better customer support, but their cards are also more expensive for lower specs.

Tl;dr: buy if you want a gtx 1080 and have a large enough case for it.
Read more
12 people found this helpful
Helpful
Comment Report abuse

Rich
5.0 out of 5 stars Be sure you have a solid PSU first!
Reviewed in the United States on May 20, 2018
Style: GTX 1080 WindForceVerified Purchase
I needed to upgrade my PSU which was dying on me when these high end cards went into OC mode, in other words, when I would start gaming. I had previously returned a 1080 msi card due to me thinking it was a doa card. Had several random hard reboots with these 1080s, after getting a gold rated evga 750w psu to replace the cheap psu I had, I haven't had any issues.

This card peaks and handles BF1 at ultra without any hiccups, on a 3440x1440, 34" 100hz ultrawide monitor. Lowest Ive seen fps dip was low 70s. Pretty loud, but stays cool. Got a winner of a card.
Read more
8 people found this helpful
Helpful
Comment Report abuse

Faith
5.0 out of 5 stars Don't buy this card unless you want the BEST GeForce GTX 1080, the BEST price, the Best quality and an awesome experience!
Reviewed in the United States on October 4, 2017
Style: GTX 1080 WindForceVerified Purchase
Appears to function BEST of the aftermarket Nvidia GTX 1080's. Best price as well. I did a lot of comparison shopping before i decided on the Gigabyte aftermarket design for this graphic chip set. Gigabyte has always been known for it's quality and it shows in the components they wrapped around this chip set. The fans (3 of them) are dead quiet and don't even spin at idle, normal workloads. But when you are really using this card for VR or high rez games, as it was intended to be used, it is fantastic! Perfect for VR and my Oculus Rift setup where 90 fps for EACH lens is needed, it doesn't skip a beat and just really gets the job done. Wonder graphics card, super engineering and quality parts. It's more than worth the price. Love it!
Read more
16 people found this helpful
Helpful
Comment Report abuse
See all reviews

Capt.RedEagle
4.0 out of 5 stars Decent card. Coil whine stopped after 10mins
Reviewed in the United Kingdom on November 1, 2018
Style: GTX 1080 G1 GamingVerified Purchase
Got this card for a good price. Was a huge improvement over my r7 360. For the first to 10mins of use it had coil whine but after set it to quiet mode the only thing i heard was the fans which did not get much space for air .based the temps if it was placed in a decent case I would have gotten really good temps
Read more
One person found this helpful
Report abuse

Page 1 of 1 Start overPage 1 of 1
This shopping feature will continue to load items when the Enter key is pressed. In order to navigate out of this carousel please use your heading shortcut key to navigate to the next or previous heading.
Back
Next
Pages with related products. See and discover other items: geforce gtx graphics card, 2080 super, nvidia rtx 2080 super