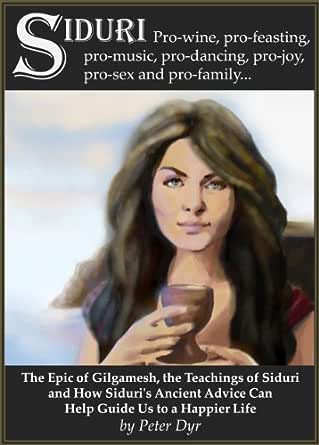 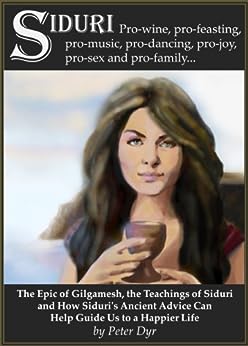 The Epic of Gilgamesh, the Teachings of Siduri and How Siduri's Ancient Advice Can Help Guide Us to a Happier Life, Third Edition Kindle Edition

3.8 out of 5 stars
3.8 out of 5
52 customer ratings
How does Amazon calculate star ratings?
Amazon calculates a product’s star ratings based on a machine learned model instead of a raw data average. The model takes into account factors including the age of a rating, whether the ratings are from verified purchasers, and factors that establish reviewer trustworthiness.
Top Reviews

Greg Strandberg
5.0 out of 5 stars Good take on Ancient History
Reviewed in the United States on August 25, 2013
Verified Purchase
Lots of people don't realize that there was a flood story long before word of Noah and his Ark came along. The Epic of Gilgamesh talked about this thousands of years ago.

Dyr manages to highlight the contribution to this tale by Siduri, a young woman whose original role in getting the work to us today may have been covered up. Suduri's teachings really tried to get us to understand one another and became the basis for a whole new philosophy. Lives were to be lived to the fullest, with music and joy, but also a strong love for family.

What I really like about the book though is how it talks about the ancient city of Uruk and the role of its king, Gilgamesh. He ruled nearly 5,000 years ago and Dyr does a good job giving us the information there is about him.

You'll also get the complete Epic of Gilgamesh and some commentary. Overall a pretty good deal!

Frank Paine
5.0 out of 5 stars Gilgamesh Revisited...Sort of...
Reviewed in the United States on February 28, 2019
Verified Purchase
I first read The Epic of Gilgamesh many decades ago, so this was a re-read in which some of the teachings of Siduri were interpolated to make the story more effective. The Epic is a classic--perhaps the oldest literary work so far recovered in human history. The interpolations were done tastefully, and help to make sense of some things that weren't clear in the original. Reading it will not be a waste of your time.
Read more
Helpful
Comment Report abuse

Isn't it great that the older you get, the more things come your way in life to ponder and enjoy. It seems we often get caught up, doing "our own things" and sometimes we do forget to stop and "smell the roses." One rose that had never crossed my path was the 4000 year old Epic of Gilgamesh. My hat is off to Professor Peter Dyr for taking the initiative to promote educating us all on these old ancient writings. All who know me know I have a thing for honoring and remembering the ones who walked the earth before us. I cannot think of a better way of honoring those who have gone before us than reading the records they have left for us to enjoy and to learn from. Like all records it is up to each of us to use our own given rights to take from it our own interpretations. I found it fascinating that even back 4000 years ago Siduri taught that "marriage" then children was the purpose of life, that one should keep oneself and the clothes they wear clean. She also taught that one should keep himself (I guess clean, honorable,etc.) enough so that his wife could be proud of and delight in his embrace. "Look at the child that is holding your hand," she said. To me she meant thank the Lord for giving you children and be responsible as a parent and teacher for nurturing such gracious gifts from God. Those were some of the things Siduri advised Gilgamesh (probably ancient advice for all of us) that are, she believed, the main concerns for man in this life. 4000 - 5000 year old advise, wow! Take a journey with Gilgamesh and slay lions, cross deadly waters in search for immorality - it's a great read and written so long ago, who would figure. I cannot help but give 5 stars to an author for putting such works before us in such an inviting and interesting manner. Gene Covington
Utah's Stolen Treasures: The Ancients Are Crying
Read more
One person found this helpful
Helpful
Comment Report abuse

Heather F.
5.0 out of 5 stars The analysis and discussion was insightful!
Reviewed in the United States on May 13, 2016
Verified Purchase
I read the epic in college but we skimmed through a lot of stories so I didn't really have time to enjoy it then. I just love anything with history, linguistics and anthropology so this was a pleasure for me to read. Although it'd be useful if you were reading it for school like cliff notes. I can think of a lot of ways to interpret the words especially when scrutinizing over one sentence at a time. But the author is careful not to stray from the original source. He also doesn't say "this means that" however he offers the reader the content, historical facts and possible meanings so they can draw their own conclusions. For me, the best part was reading a thought or sentence from 5000 years ago and thinking this won't correlate to my 21st century life or opinions - and then discovering that I'm not so different after all. Truly amazing!

lafamilglia
5.0 out of 5 stars An eye-opening education!
Reviewed in the United States on January 29, 2014
Verified Purchase
This is a wonderful book. Prior to reading, I had no, or very little, understanding of Gilgamesh, Siduri or any of that ancient advice that seems to be so applicable to today. Now, I do and am better for it.

To not enjoy this book is like not enjoying a wonderful glass of wine or a sunset. You have to see the beauty in it, and the words.

Learning about the old text and the authors take on his translation (I have to agree with it) was enlightening - truly. What gripped me most was my education, again I knew very little and I am amazed that such an ancient text can be so relevant. Carpe Diem for sure. Wonderful. The author has created something of absolute value, especially to those just entering the ancient world of literature. Thank you for taking the time to write this masterpiece! Bravo.
Read more
2 people found this helpful
Helpful
Comment Report abuse
See all reviews from the United States

Edgar Livingstone
5.0 out of 5 stars An engaging exposition
Reviewed in the United Kingdom on December 29, 2015
Verified Purchase
... of a philosophy which is complex in its simplicity. Also a valuable gloss on the text in my view. Very enjoyable and thought-provoking.
Read more
Helpful
Sending feedback...
Thank you for your feedback.
Sorry, we failed to record your vote. Please try again
Report abuse

Mrudulla
1.0 out of 5 stars Was expecting the real Middle Eastern folklore tale of Gilgamesh
Reviewed in the United Kingdom on May 31, 2015
Verified Purchase
Not the real thing.
Read more
One person found this helpful
Helpful
Sending feedback...
Thank you for your feedback.
Sorry, we failed to record your vote. Please try again
Report abuse

Sam Edge
5.0 out of 5 stars A thoughtful and Thorough Treatment of the Subject Matter
Reviewed in Canada on August 28, 2013
Verified Purchase
This was my introduction to Gilgamesh and Siduri. I found the history of the Gilgamesh Epic and the Sidurian Philosophy was was well presented and accessible. The Teachings of Siduri were relevant and applicable to my life and I was able to take away some useful new insights. I was impressed with the obvious depth of knowledge of the Author and his thorough and easy to understand writing style makes this a worthwhile read. Given the subject matter the ability provides an overall thoughtful and thorough treatment of a fairly complex topic.
Read more
One person found this helpful
Helpful
Sending feedback...
Thank you for your feedback.
Sorry, we failed to record your vote. Please try again
Report abuse