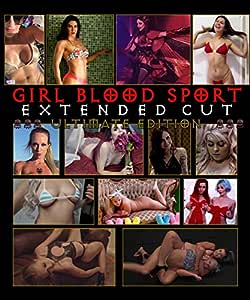 THE EXTENDED CUT PROVIDES THE BEST, OVERALL SATISFACTORY & IMMERSIVE EXPERIENCE FOR OUR FANS THAN ANY OTHER EDITION!


Chaos follows a deadly duo of maniac assassins after they host a brutal, no-holds-barred tournament inside a sinister steel cage surrounded by razor-sharp barb-wire after luring hungry, aspiring models into the backwoods of Columbus, Ohio with a prize too good to be true. Just as they turn the tide on each other, a mysterious and haunting violent vixen, literally with an ax to grind threatens their status as deadly assassins in this blood-soaked, sweat-drenched nightmare you'll never forget. Inspired by shockingly true events. The feature film, Girl Blood Sport presents itself as a cautionary tale about the dangers posed in the freelance modeling world.