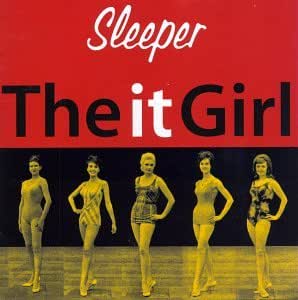 Secure transaction
Your transaction is secure
We work hard to protect your security and privacy. Our payment security system encrypts your information during transmission. We don’t share your credit card details with third-party sellers, and we don’t sell your information to others. Learn more
Details
Ships from
Amazon
Sold by
RapidPrimePros
Return policy: This item is returnable
In most cases, items shipped from Amazon.com may be returned for a full refund.
Read full return policy
It Girl has been added to your Cart

Save with Used - Good
$9.99
FREE delivery: Monday, April 19 on orders over $25.00 shipped by Amazon.
Ships from: Amazon
Sold by: Sunshine Consignments

$11.59
+ $3.99 shipping
Sold by: MyBooKshelfToYours👉Shipped Worldwide
$19.21
& FREE Shipping on eligible orders. Details
Sold by: Media Supplies Outlet
Have one to sell?
Sell on Amazon

Digitally remastered and expanded two CD edition of the 1996 sophomore album from this Britpop band led by Louise Wener. Sleeper were massive: hit singles, sell out tours, and at one point you could not open a magazine or a newspaper without seeing a picture of the band. Packed with singles and presented here with a hatful of B-sides and live tracks, the time is right to dip your toe back in the Britpop waters.

Matt
5.0 out of 5 stars some albums you just love because you do
Reviewed in the United States on May 9, 2006
it wasn't very difficult to separate the wheat from the chaff when it came to mid 1990's britpop. for every stinker like menswe@r and the bluetones, you had pulp's cleverness, blur's gleeful laddism, suede's dark cynicism, supergrass' goofiness (although they've since proven themselves among the finest musicians ever), and elastica's rawness. and then there was sleeper.

sleeper didn't really fit the within the confines of traditional britpop. first of all, sleeper was one of the few female-fronted bands (along with elastica, echobelly, and catatonia) to actually make a name for themselves. what's more, damon albarn wasn't dating justine from elastica, and louise wener (while certainly not bad looking in the least) lacked sonya aurora maden's overt sexuality and feminist stance. maybe that's why sleeper never quite reached the same heights as their britpop peers.

it's a shame, really, because sleeper's second album, 'the it girl,' is one of the finest britpop albums--right up there with 'parklife,' 'urban hymns, 'dog man star,' and 'different class.' what sleeper *did* have going for them were incredibly good, catchy, melodic songs. 'the it girl' built on the success of their first single, 'inbetweener,' and the result was one of the most consistently gratifying albums of the era. stephen street (uber-britpop producer) should be given credit for harnessing louise wener's and andy mcclure's considerable writing talents. however, although mcclure was undoubtedly indispensable, it's clear 'the it girl' is louis wener's show. her narratives on 'the it girl,' are compelling and biting, revealing a woman coming to terms with loser boyfriends ('nice guy eddie'), uncertainty ('what do i do now?'), lost love and betrayal ('sale the century'). no, louise wener did have the greatest of voices, but her voice serves the songs well and she certainly can carry a nice melody. ultimately, 'the it girl,' is an album full of immediately memorable songs by a band, i fear, lost in the ashes of the britpop meltdown. it's a shame because i absolutely adore this album. it didn't leave my cd player for the better part of 1997. whenever i listen to it i have nothing but great memories of what it was like to be smack dab in the middle of the britpop explosion. it was the best summer of my life and this was my soundtrack.

giovanni
3.0 out of 5 stars Brainy , clumsy pop for those who enjoyed the early 90's
Reviewed in the United States on January 1, 2004
For all we know Louise Wener might be married and have lots and lots of kids now . What we do know for sure though is that after 1997's " Pleased To Meet You " she didn't try to write music ever again . Never was a solo project announced nor did Sleeper's record company ever imply that there was a new album in the works . The Britpop era was over and there didn't seem to be any room left for them to breathe as artists and keep creating .
Even if you were one of the half million people who bought " The It Girl " back in 1995 you can't help but admitting that Sleeper were a band with higher I.Q than actual talent in melody . Still , it's obvious that this one was the best of their three offerings and one of the coolest british releases of that time . From the delicious female cynism of " Nice Guy Eddie " ( " Yes I knew that you wanted me " ) to the honest lust and love of " Sale Of The Century " ( " Was it when i said i wanted to have children ? " ) , the lyrics have such a strong personallity of their own and the album's good points don't stop here . " Statuesque " is as catchy as they get while " Stop Your Crying " , even though it's quitte different from a typical Sleeper song , has that positive vibe that's hard to resist . Even the lo-fi ballad of " Click Off Gone " has a moody ,weary quality that makes it stand out .
Overall The It Girl is a good pop record which never manages though to be anything truly gripping or eartshattering . Still , for me they were a guilty pleasure of some sort : a female fronted band with a singer who couldn't sing and a monsterlike confidence which you could never suspect where it came from .
Read more
3 people found this helpful
Helpful
Report abuse

ShinyDemon
5.0 out of 5 stars What I wouldn't have done to be with Louise Wener...
Reviewed in the United States on June 19, 2010
I have to declare bias upfront. Louise Wener was my dream girl back in mid 90s. We are about the same age and I still think about her probably more than I should.
I was there at Milton Keynes in 1995 when Michael Stipe escorted her onto the stage in front of 60,000+ fans and sang her Happy Birthday to her. She has since refered to this as one of her great memories of the time. It was an epic night; Sleeper opened, followed by the Cranberries, Radiohead and R.E.M.
As for this album, it's locked into its time and place for me, but it certainly stands up against the likes of Blur, Oasis, Suede and others of the era.
The opening sequence of Lie Detector, What Do I Do Now and Sale of the Century is hard to beat (I'm talking about the UK version).
Oddly, the brilliant "Glue Ears" has been omitted for this release. Not sure why, but you can't probably download it.
Read more
One person found this helpful
Helpful
Report abuse

abacab
5.0 out of 5 stars Essential Britpop (Beware there's a 2011 Expanded Edition Out!
Reviewed in the United States on August 28, 2013
Please be aware that there is an expanded 29 track version of this album. It includes some great b-sides.

Anyone who has a slight interest in Britpop needs to buy this. Every song is catchy, with lashings of British humour thrown in. Louise has a great indie rock chick vibe. A+++
Read more
2 people found this helpful
Helpful
Report abuse

D. Tucker
5.0 out of 5 stars One up's the amazing debut.
Reviewed in the United States on June 12, 2000
Though Sleeper's fine debut, Smart, was an instant classic, The It Girl does it one better. Better songs, better vocals, better variety, it's all here. And you gotta love the cheeky title.
Read more
2 people found this helpful
Helpful
Report abuse

Mr David Brewin
5.0 out of 5 stars Great CD
Reviewed in the United Kingdom on March 27, 2018
Verified Purchase
Great when it came out and still great
Read more
One person found this helpful
Report abuse

nathan
5.0 out of 5 stars All fine
Reviewed in the United Kingdom on July 17, 2019
Verified Purchase
spot on
Read more
Report abuse

tom
5.0 out of 5 stars Five Stars
Reviewed in the United Kingdom on June 18, 2016
Verified Purchase
One of the very best britpop albums of the era, first class songwriting and performances.
Read more
One person found this helpful
Report abuse
See all reviews
Back to top
Get to Know Us
Make Money with Us
Amazon Payment Products
Let Us Help You
EnglishChoose a language for shopping. United StatesChoose a country/region for shopping.
© 1996-2021, Amazon.com, Inc. or its affiliates