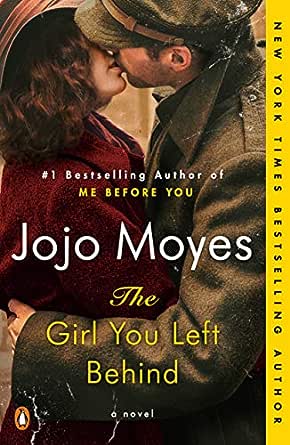 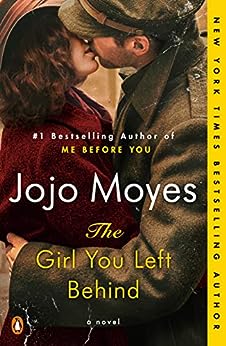 The Girl You Left Behind: A Novel Kindle Edition

Save 46% on Audible
For a limited time, get your first 4 months of Audible membership for just $7.95/month. Get this deal
click to open popover

Moyes (Me before You, 2012) writes with such clarity that one can almost see the eponymous 100-year-old painting at the center of her wonderful new novel. Also crystal clear are the emotions that protagonist Liv Halston attaches to the portrait. Gifted to Liv by her late husband, David, in celebration of their wedding, The Girl You Left Behind becomes a personal icon, embodying all that was good about their brief marriage. What is less clear is the painting’s provenance and who has the right to assert ownership. Will Liv’s notion of ownership unravel when the artist’s heirs sue to reclaim what they call ill-gotten goods, seemingly misappropriated by German soldiers during WWI? Did the artist’s wife—the subject of the portrait—give or sell it? Can anyone establish a clear trail of legitimate ownership? Does emotional attachment to a work of art have cash value? Can love ever trump greed? At its heart, such questions, thrumming in the background, add depth to what is an uncommonly good love story. --Donna Chavez

"Jojo Moyes expertly weaves a bittersweet tale in this irresistible novel, taking careful interest in the dark corners that exist within great love stories, and the trickiness of simple happy endings. A-"
—Entertainment Weekly

“Moyes writes delicious plots, with characters so clearly imagined they leap off the pages in high-definition prose. . . . Clever plot turns make for a satisfying ending . . .  Moyes brings fresh strokes to this story about the power of art and love to transcend what imprisons us. Romantics looking for a story set amid the politics of plundered art couldn't do much better than The Girl You Left Behind.”
—USA Today (3 1/2 stars)

"Jojo Moyes builds on her strengths in this moving and accomplished new novel. As she did in the best-selling Me Before You, she asks readers to think in fresh ways about a morally complex issue. . . . The Girl You Left Behind is strong, provocative, satisfying fiction."
—The Washington Post

"'In this moving paean to daring, determination and perspicacity, Moyes keeps the reader guessing down to the last hankie."
—Los Angeles Times

"In her latest heart tugger, Jojo Moyes deftly weaves the story of newlyweds in WWI France with that of a young widow in today’s London."
—Parade

"Moyes (Me Before You) has created a riveting depiction of a wartime occupation that has mostly faded from memory. Liv and Sophie are so real in their faults, passion, and bravery that the reader is swept along right to the end. This one is hard to put down!"
—Library Journal (starred review)

"Moyes (Me Before You, 2012) writes with such clarity that one can almost see the eponymous 100-year-old painting at the center of her wonderful new novel. . . .  an uncommonly good love story."
—Booklist
See all Editorial Reviews

BridgettTop Contributor: Eye Makeup
TOP 500 REVIEWER
4.0 out of 5 stars 3.5 stars
March 15, 2018
Format: Kindle EditionVerified Purchase
The Girl You Left Behind is a very sweet story. Like all of JoJo Moyes' books, I enjoyed every page and devoured it in a very short period of time. Having said that, I think some of her other works are more compelling.

There are two parts to The Girl You Left Behind--the story about Sophie, a woman running a bar/hotel, in small-town France, during World War I; and the story about Liv, a widow struggling to survive following the unexpected death of her husband, in current time. What unites these two woman who are living 100 years apart? Liv is now the proud owner of a painting made in Sophie's likeness, which was painted by Sophie's husband, a Matisse-inspired artist.

The problem? The two stories don't really mesh. It's truly like reading two different novels. Beyond that, there are several little piddly things that really bothered me. For example, a big deal is made about a baby pig during Sophie's section of the book. They hide it from the German soldiers so it will grow and provide sustenance for them and their neighbors. The problem? Where in the world are they getting the food to feed this pig? These people are surviving on some atrocity called black bread, a food which likely tasted as atrocious as it sounded. There were no leftovers. And it's not as if the pig could roam free, finding truffles in the yard. It had to be hidden from the Germans.

That's one of many minor oversights I found in this book. Am I being picky? Perhaps. But if an author chooses to write historical fiction, accuracy equals success. Anything less isn't acceptable to readers.

Overall, if you've enjoyed Moyes' previous books, you'll enjoy this one as well. It's worth reading.

Connecticut Bookie
2.0 out of 5 stars A Disappointment
September 30, 2018
Format: Kindle EditionVerified Purchase
THE GIRL YOU LEFT BEHIND was a disappointment for me. As one who loved ME BEFORE YOU, I found the characters shallow and the plot both contrived and predictable. Oh, the woman with the painting and the man looking for the painting meet and fall in love by accident? - how convenient. Oh, Sophie kept journals? - how convenient. Oh, the little girl who knows what happens is still alive 90 years later? - how convenient.The courtroom scenes and the crazy publicity for an ownership case were laughable. The only character that seemed to have any depth was the Kommandant. I did read it all the way through, hoping for a twist that would make me change my mind, but it never came together. It is as if this was written by a different, and significantly less skilled, author.
Read more
7 people found this helpful
Helpful
Comment Report abuse

This book is narrated by two different women at different points in time. The first part of the novel takes place during WWI and tells the story of Sophie LeFevre, who owns and helps run a bar/cafe in a small town outside of Paris. The town has been taken over by Germans and the locals have all suffered from deprivation and oppression at the hands of their captors.

Sophie and her sister Helene are both concerned about their husbands who are French soldiers and possibly in a prison camp or worse. Sophie's husband is a talented and fairly well-known artist named Eduoard, and Sophie's most prized possession is the portrait he did of her shortly after they first met. She has it prominently displayed on the bar wall. When the German Kommandant sees the portrait, he becomes enthralled with it and with Sophie as well. What will happen to Sophie and her family and to their town if the Germans don't leave? And what will Sophie do in order to save her husband and see him again?

The story then moves to the present times and we meet Olivia (Liv) Halston, a woman who's been in a state of depression and grief since the death of her young husband 4 years earlier. Liv is struggling financially and emotionally but things seem to take a turn for the better when she becomes attracted to a man named Paul McCafferty. Paul works for an agency that tries to give priceless paintings stolen by the Nazi's back to their original owners, and when he spots Sophie's portrait in Liv's home, he feels he must take action.

I really enjoyed the WWI parts of this book, which pretty much make up the majority of the first half. I thought this part of the book was stellar and I loved reading about Sophie and the descriptions of her life and of the conditions during the occupation were vivid and educational.

My problem came when we come to the present day. As believable as I found Sophie and the decisions she had to make - I had the opposite reactions to Liv. I didn't buy into her character and found myself often annoyed rolling my eyes at her actions and thoughts. I don't necessarily have to like the characters to like a book, but I think we were supposed to like Liv and at times I just didn't. I also had trouble buying into the relationship between her and Paul.

My biggest problem, and this is without giving away any spoilers, is that I don't like books that try to wrap up all the loose ends with a bow. I thought the book could've had a stronger impact without this and I thought there were way too many coincidences and convenient twists along the way.

So this was a mixed bag for me; I loved the WWI bits but was frustrated by the present-day storyline.

Cynthia Parten
4.0 out of 5 stars Great start, disappointing ending
November 5, 2014
Format: Kindle EditionVerified Purchase
I made a mistake when I started reading this book. I made the mistake of starting on a Saturday morning. Before I knew it, half of my Saturday was gone because I finished it in a little over four hours. I have loved each of the Jojo Moyes books I have read previously and she does not disappoint. This was a tale of two women: Sophie, who was struggling during WWI with her husband at war and then nearly a hundred years later Liv, who was still grieving the loss of her husband. I was so incredibly engrossed with Sophie's story. This author does a great job with historical fiction. Somehow I could imagine very clearly this small town of Paris in 1916 dealing with the occupation of German soldiers. But I had to take a star away because of Liv's story. I really wasn't as engaged and she kind of annoyed me a bit. I could not put the book down though because I was so anxious to see what happened to Sophie. I won't give away any spoilers, but I do think the author took the easy way out with that one. There were too many coincidences and twists that basically had everything wrapped in a neat bow at the end. I think it was actually too neat. But I loved the story and I love happy endings so I still gave this book four stars. I can't wait to read the author's other novels!
Read more
18 people found this helpful
Helpful
Comment Report abuse
There are 2,533 customer reviews and 2,575 customer ratings.
See all 2,533 customer reviews
Write a customer review