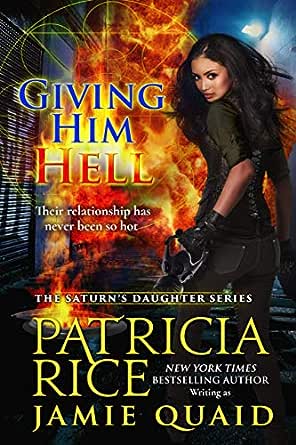 You've subscribed to Saturn's Daughters! We will preorder your items within 24 hours of when they become available. When new books are released, we'll charge your default payment method for the lowest price available during the pre-order period.
Update your device or payment method, cancel individual pre-orders or your subscription at
Your Memberships & Subscriptions
There was an error. We were unable to process your subscription due to an error. Please refresh and try again. 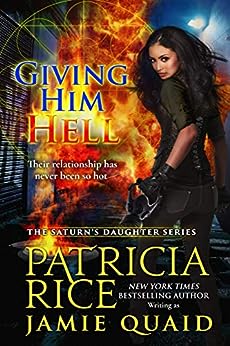 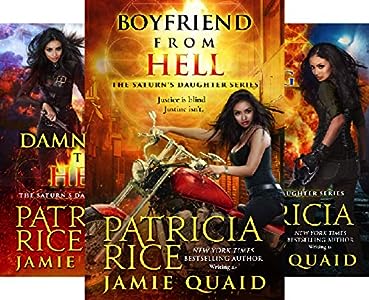 Jamie Quaid is the alter ego of former CPA, Patricia Rice. With several million books in print and New York Times and USA Today's lists under her belt, she writes urban fantasy, mystery, and emotionally-charged romances that have won numerous awards and been honored as RITA® finalists in the historical, regency and contemporary categories. --This text refers to the paperback edition.

3.7 out of 5 stars
3.7 out of 5
15 global ratings
How are ratings calculated?
To calculate the overall star rating and percentage breakdown by star, we don’t use a simple average. Instead, our system considers things like how recent a review is and if the reviewer bought the item on Amazon. It also analyzes reviews to verify trustworthiness.
Top reviews

Lucinda Marty
5.0 out of 5 stars I really love this series
Reviewed in the United States on June 30, 2015
Verified Purchase
I really love this series. Volume 3 finds Tina starting her law practice when the city decides to condemn the biohazard known as the Zone using eminent domain so the space can be rebuilt as a medical research facility. Does this strike anyone as a bad idea? Facing possible homelessness, our heroine navigates the pitfalls of her new powers while dealing with exploding Christmas decorations, "Do Gooders", evil garden gnomes, and a blue blob which may be a unique lifeform hatched in the Zone. Also, the glowing manholes might just be portals to Hell. Tina navigates all this craziness with a healthy dose of snark.
Read more
Helpful
Report abuse

Bodicia
4.0 out of 5 stars Tina wins, the Zone Zero, Yeah
Reviewed in the United States on April 20, 2016
Verified Purchase
Hey, I liked the first two, and if she does more I'll read them. An alternate universe in Baltimore - well, we knew it all along.
Read more
Helpful
Report abuse

WOW!
1.0 out of 5 stars Not well developed
Reviewed in the United States on January 1, 2015
Verified Purchase
It was far from what I expected.
Read more
Helpful
Report abuse

C Thilmany
4.0 out of 5 stars Read Boyfriend From Hell first - 3.5 stars
Reviewed in the United States on October 19, 2014
The Zone: an area in Baltimore that due to a chemical spill ten years ago, is both unsafe and a lot of weird things happen. Very weird. Justine (Tina) Clancy who just months ago passed her bar exam and set up shop, fits right in. As a daughter of Saturn it's her job to dispense justice, and one of her ways of doing it is to send the truly evil to hell.

The veil between hell and the Zone is getting thinner so more weird and dangerous things are happening. Acme, the nearby chemical company responsible for the chemical spill, wants the area declared unsuitable for habitation so using eminent domain, can have a medical research facility built on the site. For the first time in her life, Tina feels like she's got a home and is going to fight with everything she can to prevent everyone from having to leave.

This is the third book in the series and all of the regulars are back. There's plenty of new weirdness to experience and she often finders herself fighting her hormones when it comes to both Max and Andre. There's plenty of danger, tension and emotions. Tina sometimes goes off in a direction that didn't at first make sense to me. That sometimes slowed things down. But the explanation comes and fits with what she's trying to accomplish and I enjoyed the different twists as things came together. And since Tina is a lawyer, we also get into the law as well as political scenarios.

There's enough back filler for someone who is new to the series to pick up, but I think they'd find it somewhat of a struggle to jump into the Zone, understand what Tina has done in the past as well as appreciating the characters. At least read Boyfriend From Hell first.

Reviewed from a free copy provided by Library Thing.

the_goddess_isis
4.0 out of 5 stars Entertaining Series, But Needs to Be Read Chronologically
Reviewed in the United States on November 6, 2014
I would like to thank the LibraryThing Early Review program for granting me a copy of this e-book to read in exchange for an honest review. Though I received this e-book for free that in no way impacts my review.

Goodreads Teaser:
<blockquote>Tina Clancy is looking forward to a nice, quiet Christmas, but life has other plans for the newly-minted lawyer. As a Daughter of Saturn, Tina expects a healthy dose of crazy in the Zone, Baltimore's roughest docklands. Sparkling holiday lights that spontaneously combust – check. Garden gnomes swimming in sauna-like snow melt— check. But when a blue blob crawls out of the red-hot sewer— that's a bridge too far.

Soon, Tina is trying to exorcise a malevolent ghost, stop the ruthless local chemical plant from bulldozing her neighbors, and banish endangered tourists from her increasingly quirky home. At the same time, she's trying to figure out whether her drop-dead sexy client, Andre Legrande, is a gift-wrapped present or a stocking full of coal. Oh— and Tina just may have accidentally opened a gateway to Hell.</blockquote>

The third in the "Saturn's Daughter" series, this book continues on with the same themes that make up the prior two books. The question of Good vs Evil is at the forefront, plus the concern of how any one person can safely act as both judge and jury. Yet that is exactly what Mary Justine Clancy, better known as simply Tina or Clancy, has been saddled with as one of Saturn's Daughters.

Having reached her goal of becoming a bonafide lawyer, Clancy is still struggling with the challenges of her legal career, and more importantly, the delicate balancing act that being Saturn's Daughter demands. She's been given enough power to alter the world, but no rule book to help guide her decisions. And the lawyer in Clancy loves a good rule book. Instead, all she has to guide her is an over-developed conscience.

Between taking advice from her cat Milo, giant blue blobs that may or may not be a hallucination, and all the Zonies she has come to love like family, Lawyer Tina Clancy spends an almost as much of her time in trouble as she does planning trouble. And when not in immediate danger from her brand of 'justice' she's in danger of falling for the two men in her life; ex-boyfriend Max, who now inhabits his cousin Dane's body, and her client/boss, Andre LeGrande. But even if she could decide between the two, she's recently learned that she is likely doomed to another year of celibacy if she wants to spare any child of hers from becoming another of Saturn's Daughters. Yet it seems that her planned celibacy may need to be much more specific than she ever imagined.

Even as Clancy grows as a character, so to do all the wonderful folks that make up her adopted home. The Zone protects its own, and Clancy is now fully a Zonie, not too mention their new legal mouthpiece, and unbeknownst to most, she's also their behind-the-scenes dispenser of real justice. She loves finally having a real sense of family, but not the weight of being the judge, jury, and executioner, all rolled into one. Especially without some kind of guidance before she reaches her verdicts, rather than finding out after the fact if her choices were right or wrong. Waking up with a different part of your appearance altered in your favor no longer works for Clancy. She'd rather others benefit from her good judgement calls; her dislike of the personal benefit aspect of the job is just one more reason she appears to be one of the better Daughters of Saturn.

As with the other books in this series, the story line is smooth and entertaining, nicely matching the actions and emotions of the characters. The arc of the story is well designed and executed, with several peaks building up to the final, explosive ending. And although this book could conceivably be the final one of this series, I anticipate at least one, if not several, more books before this story reaches its end. By the close of this book several questions have been answered, just as several new questions have been raised. It makes for an entertaining and enticing series to follow.
Read more
2 people found this helpful
Helpful
Report abuse

Carod
4.0 out of 5 stars Humorous Urban Fantasy
Reviewed in the United States on January 3, 2015
Giving Him Hell is the third book in the Saturn's Daughters urban fantasy series by Jamie Quaid. While it is not necessary to have read the first two books of the series to enjoy this one, it might help to more quickly understand the world and characters the author has created. Justine Clancy is a newly minted lawyer finally settling down in a place where she feels at home. Granted, the Zone is a very strange neighbourhood. Holiday lights spontaneously combust, dumpsters dance and garden gnomes wander around. Tina has her hands full with her new practice, her ex-boyfriend and a distractingly sexy client. She finds herself having to exorcise an evil ghost, stop the government from expropriating her neighbourhood and possibly close a gateway to Hell. All while trying to celebrate Christmas.

I have enjoyed many of the books written by this author under her other name and found this one had many of the same elements that I appreciate from her other works. The book is populated with many quirky characters. There is a lot of humour, a bit of romance and some danger. Neither the sexual content or the violence are too explicit. I enjoyed the fact that Tina was still coming to terms with her powers as a Daughter of Saturn and her struggles with doing what is right added some depth to her character.

I would recommend this book to readers who enjoy urban fantasy with some humour.
Read more
Helpful
Report abuse
See all reviews