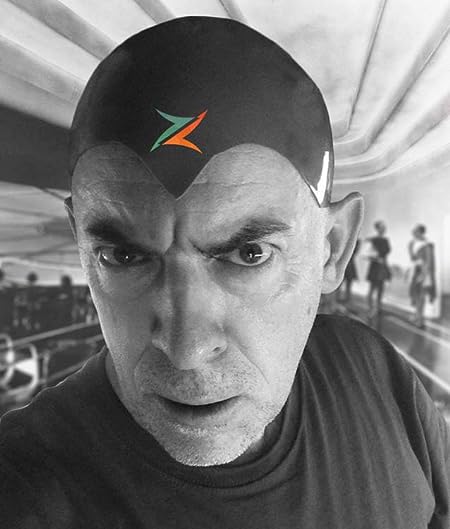 Glenn Campbell is best know as a self-appointed Area 51 expert in the 1990s, appearing in dozens of TV shows and profiled in the New York Times (June 24, 1994). If you have heard of Area 51, it is due in part to Glenn's effort to organize information about the base and make it accessible to the mainstream media. A professed agnostic on UFOs, Glenn was known for his evenhanded approach to the many fantastic claims associated with the secret base. Glenn's first book was a self-published guide to exploring the surrounding area. His 1994 AREA 51 VIEWER'S GUIDE is now available FREE as a printable PDF on his website.

In the new century, Glenn has shifted gears, becoming more philosophical. From 2005 to 2008, he appointed himself the unofficial "Family Court Guy" in Las Vegas, sitting in on court hearings and reporting on them on a website and a newsletter. He hoped to bring the same attention to child welfare, delinquency and divorce as he did for Area 51. (Profiled in the Las Vegas Sun, Dec. 18, 2005.) His experiences in Family Court became the basis for his first philosophy book, THE CASE AGAINST MARRIAGE.

Glenn is an accidental novelist. His first novel, LIMBO, was conceived, written and published in 58 days. After this first spontaneous "practice novel," Glenn embarked on a much more complex one he has been contemplating for years. HARPER JUNCTION tells the story of a 3/4-inch boy living on a HO scale train layout. This 120,000-word novel, written in 2014, was released as an ebook on Jan. 1, 2015.

Employed in a field that allows him to travel, Glenn now does it continuously, with no fixed residence. He has visited 55 countries so far. His stunning photos from around the world can be found on Twitter (@Peripatetia), Facebook (/BadDalaiLama) and Instagram (@BadDalaiLama). Glenn's daily philosophical musings are found on a separate Twitter account: @BadDalaiLama ("the Dalai Lama's evil twin"). Visit his massive website of photos and written works at Glenn-Campbell dot com. 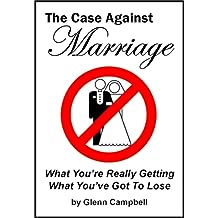 The Case Against Marriage: What You're Really Getting. What You've Got To Lose. Apr 7, 2013
by Glenn Campbell
( 26 )
$4.99
Not just a critique of marriage but one of the best books EVER on romantic relationships and how they really work. What do people want from love? How do they think marriage will help them, and what does it really give them?

Marriage is all about love, right? Actually, it’s more about money. Behind the romantic language, marriage is primarily a financial agreement merging the assets and liabilities of two individuals into a single corporate entity. After your wedding, the money you earn and debts you incur are no longer legally yours; they belong to the marital “community”—a common pot that both of you contribute to and draw from. It’s a lot like Communism: an idealistic sharing of resources and risks supposedly for the common good.

What could go wrong with this plan? Pretty much the same things that brought down political Communism in the late 20th Century: It slows growth, suppresses initiative, dilutes responsibility and mires decisions in bureaucracy. Healthy relationships need clear boundaries, and marriage erases too many of them at once.

Marriage was designed for medieval times. Back then, life was hard and short; most marriages were arranged, and a woman was essentially the property of her husband. Marriage was a sort of licensing system for sex and childbirth. Once the relationship was officially approved and the religious ceremony concluded, the couple's overriding goal was to produce as many children as possible, knowing that many would die.

Times have changed. Birth control, longer lifespans, sexual freedom and women’s rights have rewritten the rules of matrimony. Under the laws of most Western countries, marriage is no longer a sex license or child-rearing contract, only a contract to merge your financial resources. “It’s only money,” couples may say, but Glenn Campbell argues that love and money are separate issues that should be kept that way.

In modern Western society, unmarried people can legally have sex, live together, raise children, buy property together and do nearly everything else associated with a committed relationship, so why do they need to marry at all? What are you really getting when you walk down the aisle? Is marriage merely a public announcement to make your relationship “official,” or does it fundamentally change the relationship?

With simple, powerful and accessible arguments, The Case Against Marriage explains why, if you truly love someone, marriage may not be the wisest way to show it.

Preface — Introduction — What is Marriage? — Pair Bonding [Read the first 4 chapters for free on Amazon] — Sex and Intimacy — Loneliness and Engulfment — Love is not Charity — The Dilemma of Beauty — The Problems of Communism — The Dark Star Duet — A Bureaucracy of Two — Commercial Delusions — Wedding Pornography — Charles' and Diana's Wedding Disaster — Commitment and Negotiation — Love and Enabling — Love Can't Change Personality — The Power of Money — The Credit Card of Life — Children — Advisors and Sycophants — The Evolution of Needs — The Seduction of Novelty — The Investment Effect — Back to the Sixties — When Love Ends but the Marriage Doesn't — Trapped in their Own Musuem — Problems of Living — Lifelong Learning — Personal Development — Social Pressure — Personal Economies — The Meaning of Life — Death Benefits — Ban Gaɣ Marriage! (Heterosexual Marriage, too!) — Addendum: The Istanbul Interview — Addendum: 100 Tweets on Marriage — Acknowledgements 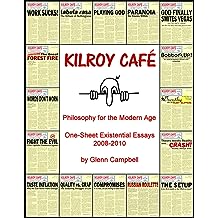 Kilroy Café: Philosophy for the Modern Age Apr 28, 2013
by Glenn Campbell
$3.99
This is a collection of 68 one-page philosophy essays written as a newsletter between May 2008 and March 2010. The best way to understand these essays is to read the free samples available here. A lurid headline like "Ban Gay Marriage!" or "Work Sucks!" draws us into a surprisingly deep analysis of a universal human fallacy, offering fresh insight into something we thought we already understood.

Many of these essays were inspired by the author's experiences as an observer of Family Court in Las Vegas (2005-2008), but the topics are wide-ranging and should be of value to any sentient human. The essays cover a spectrum of existential topics, including marriage, sex, creativity, death, law, gender, addiction, teenagers, paranoia, luxury, wealth, charity, success, boundaries, curiosity, evil and the meaning of life.

Each issue is a stand-alone monograph designed to fit a single 8½ x 11" printed sheet. This was intended as a deliberate creative constraint, forcing the author to be concise. Since the typeface was small, each essay fills several book pages. The total size of the collection is 55,000 words—almost as long as a novel but packed with far more meaning.

#1. Miracle Elixir Discovered in Spain
#2: Ban Gay Marriage! (heterosexual marriage, too!)
#3: Sex Fraud
#4: Teenage Insanity Explained at Last!
#5: The Problem of Creeping Commitment
#6: Reality Sucks – Get Used to It!
#7: Preening and Nesting Behavior of the Human Female: A Study
#8: The Tragedy of Success
#9: Death by Sarcasm
#10: Male Sports Addiction: A Clinical Profile
#11: Invasion of the Mind Parasites
#12: KAPU! - Sensible Reforms to Criminal Law
#13: Consumer Crap and Why It Happens
#14: Hubris: The Tragic Disease of Success
#15: Bottom Up! – Our Patented Personal Success System
#16: Mindless Entertainment Wasting Our Planet
#17: So You’re Having an Existential Crisis (Welcome to the Club)
#18: Love and Enabling
#19: What You Need. What You Don’t.
#20: Kill the Experts! Liberate Yourself from Bad Advice
#21: God Finally Smites Vegas
#22: Words Don’t Work
#23: The Paradox of Protection
#24: Surviving the Great Forest Fire
#25: Walking Gently on this Earth
#26: Paranoia: Our Enemy Within
#27: Playing God
#28: Tabula Rasa: The Virtues of Nothingness
#29: Theory Meets Reality and… CRASH! Reality Always Wins.
#30: The Setup
#31: The Destructive Power of Puppies
#32: Fight the Evil of the Capitalist Commercial Agenda
#33: Dorothy and the Ruby Slippers
#34: Compromises
#35: Quality vs. Crap: The Enduring Struggle of Life
#36: Taste Inflation: Why We Can Never Get Enough
#37: Accept Life! It’s the only game in town.
#38: Triage: Doing What You Can With What You Have
#39: The Tyranny of Law
#40: Responsibilities of the Victim
#41: My Friends Are Not Your Friends
#42: In Defense of Placebos
#43: “No Pain, No Gain”–not true!
#44: The Secret of Eternal Youth
#45: Work Sucks!
#46: The Fallacy of Justice
#47: Dark Star Duet: A Model of Dysfunctional Marriage
#48: Escape from Narcissism
#49: The Handicap Principle
#50: The Tragedy of Success (II)
#51: In Defense of Stereotypes
#52: The Shamanism of Luxury
#53: Why Do You Believe?
#54: The Fallacy of “Commitment”
#55: Puffery: The Legal Way to Lie
#56: Boundaries: Your Def
Read more 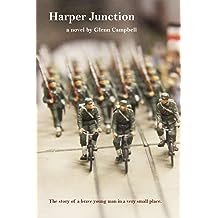 Harper Junction Jan 1, 2015
by Glenn Campbell
( 2 )
$4.99
Harper Junction is a town trapped in time. It is a small American city in the first half of the 20th Century, a place of friendly people and wholesome values where folks don't bother locking their doors at night and hardly anything bad ever happens. Everyone has a job to do, mostly connected to the two railroads that pass through town. People go to work, raise families, celebrate holidays and go to church, but nothing ever changes.

On Maple Street, there lives a boy: Casey Jones, Jr. He is the son of a local hero who died on the rails, but he doesn't remember his father. All he knows is the house he lives in and the neighborhood surrounding it. Gradually his world expands, and as it does so do his questions. Why do the trains go 'round and 'round on the tracks without delivering anything? Why don't most of the local citizens have faces? Everyone is friendly enough, but most people seem to run on a loop, doing and saying the same things every day without learning anything.

Exploring the warehouse district with a friend, Casey comes upon a place of great mystery: the Edge. This is where his world ends. Beyond this cliff is a seemingly infinite abyss. Because his eyes are so small, he can't see very far, but something is out there, some cosmic intelligence, and Casey is determined to find out more about it.

There's only one problem with Harper Junction: The town isn't real. It is part of a train set in the basement of a hobbyist in Marietta, Georgia. Casey, you see, is made of plastic, a very special kind of plastic called Vivaplas™. Although less than an inch high in our scale, Casey has thoughts and feelings just like a full-size boy. "Why am I here?" he wonders. "What is this world all about?"

Harper Junction is the central community in a made-up land called Freedonia. Everything seems perfect on the surface, but it all depends on an outside force to keep things running, the all-powerful Creator. When He fails to show up for work, things spin out of control. Trains fall off the rails, and no one can put them back. Soon Freedonia itself starts to disintegrate—carved up in sections and sent away to someplace called “eBay”. Casey must find a way to hold his community together as the End of the World approaches.

HARPER JUNCTION is not a children's book, although children can read it. It is an allegory for the big problems of adulthood. This tiny world in a rich man's basement is a model of our own, and the characters face the same dilemmas we do. Casey and his two friends live in a world of faceless people. Only they have free will. How will they use it?
Read more