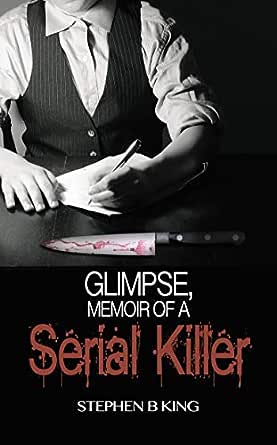 You've subscribed to Deadly Glimpses! We will preorder your items within 24 hours of when they become available. When new books are released, we'll charge your default payment method for the lowest price available during the pre-order period.
Update your device or payment method, cancel individual pre-orders or your subscription at
Your Memberships & Subscriptions
There was an error. We were unable to process your subscription due to an error. Please refresh and try again. 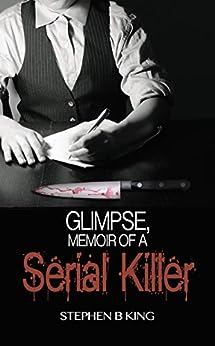 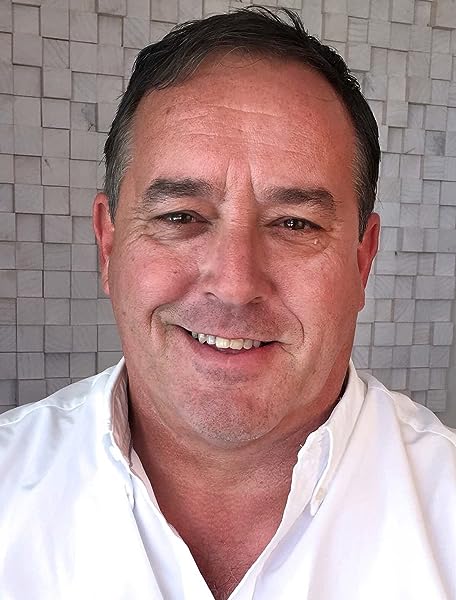 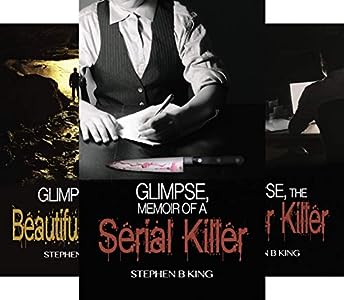 ***** Wow! Glimpse, Memoir of a Serial Killer was excellent reading. I couldn't put it down until I finished it. Stephen B. King wrote such a convincing story of the mind of of a serial killer and the search to find and stop him. I have recommended this book to my book club members and look forward to his next book in this trilogy. Carol M. NetGalley..... ***** This novel has a great plot and story, and very well painted characters. It's horrible, with lots of blood, but there are some funny situations as well. Reviewer 500533 - NetGalley..... ***** I enjoyed reading this book. It had a good story to it. I liked the variety of characters in it. It is my first book by this author. I hope to read more. Darren M. - NetGalley...... **** This was fascinating! I haven't read anything like it. The chapters told from the view of PPP, the serial killer, are riveting. The connections made by Pat, the psychologist, also spot on. The evolution of how a child becomes pure evil is built slowly and with great skill. Marianne P. - NetGalley ..... **** A story about a serial killer and a detective. I don't want to go into too much detail it ruins the book for others. It's well written and has the story from the side of the killer as well as others, mainly the detective. **** Aimee K. - NetGalley

Beginning in 1999, The Deadly Glimpses Trilogy is an exploration of the inappropriate desire between the two married central characters, who are thrust together during the hunt for three different serial killers. The use of the word Glimpse in each title lets the reader know that there will be an in depth look into why and how the killer became who and what they are, from thier own point of view.
The three books are: Book 1: Glimpse, Memoir of a Serial Killer. Book 2: Glimpse, The Beautiful Deaths. Book 3 is the explosive finale titled: Glimpse, The Tender Killer. All are published by The Wild Rose Press of NY, though set in Perth Australia, my home town.

In 1999 Australia, Sergeant Rick McCoy investigates the murder of a woman found packed inside a suitcase.

The Killer abducts another victim and threatens to dismember her slowly. His life is further complicated by a marriage in tatters. Frustrated at every turn, he is paired with glamorous Criminal Psychologist and profiler, Patricia Holmes.

While trying to rebuild his marriage, he finds himself in a desperate race against time to free the victim and fight his desire for his new partner.

Forever Night features a returned soldier who suffered physically and mentally to become a serial killer while hunting his runaway wife. If you enjoy dark, Scandinavian type crime thrillers, you will love it.

Domin8, is about a married man who is drawn into the dark world of online dating, until someone starts murdering his lovers. The Vigilante Taxi features a man who becomes a vigilante during the night shift while driving his cab. When he falls in love; the cops and an underworld figure are closing in. Burial Ground, is about a newly appointed Detective Inspector, who is handed the job of finding a serial killer who has been killing and burying his victims in an old disused gravel pit for seventeen years. He is a  worse then Hannibal Lecter, or anything from the mind of the great Stephen King.

Repo has private investigator husband and wife sleuths trying to save a man after he returns home from working in a mine to find his wife gone, bank accounts empty, and fully restored classic muscle car repossessed.
Next, a thriller about Jenny, who travels in time to come back to save the world from an all consuming blight that was genetically modified. She falls in love in the past, but can only stay for Thirty-Three Days.
Glimpse, Memoir of a Serial Killer and Book 2, Glimpse, The Beautiful Deaths  are released. Glimpse, The Tender Killer will be soon. The trilogy follows two married colleges who are attracted to each other while hunting three murderers. What will the effect be on their marriages, if they act on the desires they have?
Read more

Wendy Scott Multi-Award Winning Author
5.0 out of 5 stars Excellent Crime Thriller
Reviewed in the United States on February 20, 2020
Verified Purchase
This is a very dark psychological thriller so it’s not for the squeamish. The writing is stellar and right up there with big-name international bestselling authors, if not superseding some of them. I’m partial to stories set in Australia (as I used to live there), and having Perth as the backdrop to this complex story was an added bonus. My only reservation is that I thought the detective wouldn’t have been that naïve about the safety of his family during the on-going investigation. The author absolutely nailed the different character voices, not only was the reader drawn into the detective’s journey, but also the conflicting and harrowing narrative from the perspective of the killer – chilling stuff! I highly recommend, and have no hesitation awarding five stars, and I will also be checking out the other stories in this series, plus the author’s back catalogue.
Read more
Helpful
Report abuse

Starra Andrews
5.0 out of 5 stars We Are All Connected - The Good and The Bad - Thrilling and Engaging
Reviewed in the United States on April 19, 2019
Verified Purchase
The crossing of paths for the main characters of this story I found fascinating. Who knew Sgt. Rick McCoy's reaching out to a young troubled boy in kindness when he was a young rookie would lead to a dramatic race to save lives. I also saw deep within the killer and felt his agony upon agony growing up - facing atrocities no child should ever face. Without any help from society; hence the making's of a serial killer. Temptation and challenges also befall the lead character Rick McCoy, as I was pulled into his life journey. I loved how each character portrayed emotional depth and I felt it along with them. Highly recommended read!
Read more
Helpful
Report abuse

Ms Fiza Pathan
5.0 out of 5 stars A 'Thriller' Par Excellence!
Reviewed in the United States on September 25, 2019
'Glimpse, Memoir of a Serial Killer' by Stephen B. King is one of the best thrillers I've read in a long while. The novel was stunning, shocking & marvelously crafted. I was totally pulled into this book & put all my other reading aside to finish it. Now I'm looking forward to finishing the rest of the series. I loved the tale of Rick the police inspector who found a cut up body in a suitcase, of Paul the serial killer with an abused past, of Juliet who can't trust her husband after his unfaithfulness, of Pat who wants to get closer into the mind of a serial killer that she will risk anything to do so & so many other memorable characters that will stick in your head & won't let you forget the genius that is Stephen B. King. This book gets 5 stars from me. I loved the book & you will too, pick up your copy of Stephen B. King's book today. Looking for a new thriller that will set your pulse racing, then this is the book you should be reading. Looking for a really racy & scary thriller with a down to earth cop as the main character then this is the book for you. Looking to sink into an awesome cop-serial killer thriller on a cold fall night with a cup of hot tea in your hand then buy your copy of 'Glimpse, Memoir of a Serial Killer' by Stephen B. King today. I loved the story & hope to read the complete series. I was mesmerized by the killer Paul, the butcher & the diary he kept to keep track of his change from a regular innocent child watching horror movies at 5 into a deadly serial killer. Want to get into the mind of a killer, read this book & be stunned. Kudos to Stephen B. King on a job well done!
Read more
Helpful
Report abuse

Erryn Barratt
5.0 out of 5 stars The mind of a killer (an audio review)
Reviewed in the United States on November 1, 2019
This is a seriously creepy book. Just saying.

Sergeant Rick McCoy has a problem. He’s in charge of finding the killer of the woman found dismembered. The suitcase murder, they’ve labelled it. On top of that headache, his marriage is going through a rocky period and he’s drinking and smoking way too much. Now another woman has gone missing and it looks like he has a serial killer at work. Not much to ask for, eh?

This book works on so many levels. I loved getting into the nitty gritty of Rick’s life. His infidelity. His problems on the job. His desire to solve a murder before the next woman dies. I liked the thriller aspect – the running out of time. What I really loved was the memoir aspect of the book. The chapters alternate between Rick and the serial killer. That’s right, the memoir of the killer. And it was fascinating to get into his psyche. To see his perspective on his trajectory that took him from neglected little boy to abused young man to vindictive murderer. These glimpses are what made the book so unique.

Geoffrey Boyes is a wonderful Australian narrator. I’ve listened to him before and he never disappoints. He was perfect for this book. I can recommend this book and I can’t wait to read the rest in the series.
Read more
Helpful
Report abuse
See all reviews

Amazon Customer
5.0 out of 5 stars Brilliant Book
Reviewed in Australia on August 22, 2019
Verified Purchase
Wow what was there not to like about this book. Gripping from start to finish. I did not want to put it down but did not want it to finish!! One of the best thrillers I have read in years and the concept of the 2 main characters verbal (Rick) and (PPP) BRILLIANT
Read more
Report abuse
See all reviews
Back to top
Get to Know Us
Make Money with Us
Amazon Payment Products
Let Us Help You
EnglishChoose a language for shopping. United StatesChoose a country/region for shopping.
© 1996-2021, Amazon.com, Inc. or its affiliates