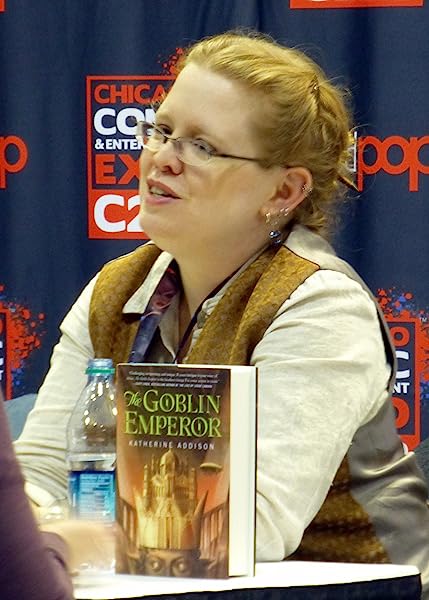 by Katherine Addison (Author)
4.4 out of 5 stars 953 ratings
See all formats and editions Hide other formats and editions
Read more Read less
Inspire a love of reading with Prime Book Box for Kids
Discover delightful children's books with Prime Book Box, a subscription that delivers new books every 1, 2, or 3 months — new customers receive 15% off your first box. Learn more.
click to open popover

Maia, the estranged son of the Emperor of the Elflands, is shocked to learn that his father and three of his siblings have perished in the crash of their airship. Whisked away to court to assume the duties of emperor, young Maia is at first overwhelmed, but he’s a smart fellow and soon learns to distinguish between those who are eager to assist him and those who have their own agendas. When he discovers that his father and half-brothers were apparently murdered, Maia determines to find out who’s responsible, recognizing that the culprit may be someone very close to him. The author combines steampunk and fantasy (this is a world of elves and goblins and the like) to tell an utterly captivating story. Addison has built a completely believable world, with its own language, customs, and history, but there are tantalizingly familiar elements (such as newspapers and pocket watches) that make us wonder from whence this world came and whether it might have sprung from our own, in a distant future. There are lots of unanswered questions here that will likely be addressed in a sequel. --David Pitt

“Challenging, invigorating, and unique. If courtly intrigue is your wine of choice, The Goblin Emperor is the headiest vintage I've come across in years.” ―Scott Lynch, bestselling author of The Lies of Locke Lamora

“I enjoyed The Goblin Emperor a great deal. I was sucked right into her world of goblins, elves, and airships, and was anxious to the very end to find out how Maia, the unwanted halfblood son of the Emperor, who finds himself unexpectedly on the throne, learns to navigagte the intrigues and danger of the imperial court. An engrossing read!” ―Kristen Britain, New York Times bestselling author of Blackveil