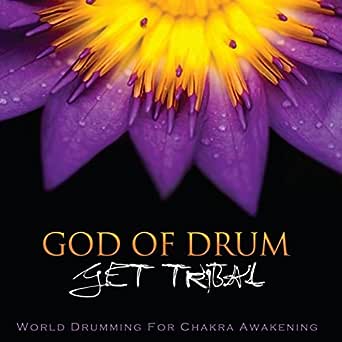 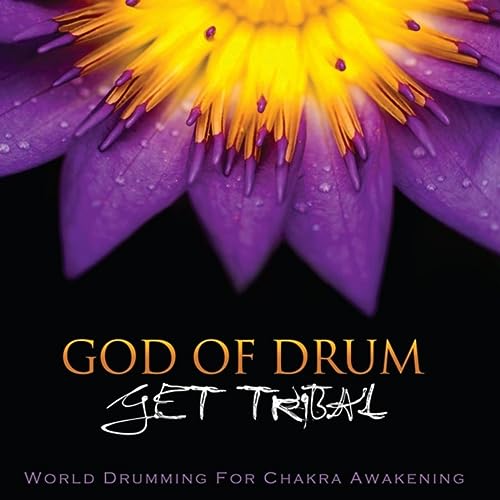 Michael Diamond
5.0 out of 5 stars Review excerpt from Music and Media Focus
Reviewed in the United States on October 27, 2013
In my more than 30 years as a new age music journalist and reviewer, I’ve seen and written about a number of albums specifically created to attune the energy centers or chakras of the body and spirit. However, God of Drum by Kari Hohne, who records under the name of Get Tribal, is certainly one of the most unique. She describes the album as “a collection of percussion-based tribal music inspired by the thunder deities of world mythology.” According to Kari: “Each track was composed based on an archetype and shamanic drumming pattern from different parts of the world.” These reflect Native American, Celtic, Chinese, Norse, African, Mayan, and more. As can be expected, there is a broad spectrum of ethnic instruments, while her parallel interest in electronic music brings in synthesizers, samplers, and other contemporary sounds. Although meditation music is generally soft and soothing, Kari purposely sought to unlock energy.

While there is a lot of metaphysics behind the music, and it can be helpful or interesting to know, ultimately it’s also fine to just press “play” and go with the flow. The album is a spirited multi-cultural musical experience that anyone can enjoy and groove to. But at its heart, “God of Drum” by Get Tribal is a powerful musical tool for unlocking energy to create harmony and balance. Her extensive research into archetypes, mythology, and shamanic studies is particularly evident in the music heard on the album. The emphasis on earthy rhythms and world music influences make this one of the most notable offerings in this particular genre. A lot of vision and creativity went into sonically designing each track, and it shows. For me, this album was a pleasant surprise, and one I’d recommend in a heartbeat.

Serge Kozlovsky
5.0 out of 5 stars Writings by Serge Kozlovsky
Reviewed in the United States on November 19, 2013
Without contemplation, all activities of Mind
Are a walk into the darkness and the chaos

Just relax and listen to this music and it will guide you. These primordial percussion beats will awaken your spirit and allow the energy to easily flow via 7 major chakras. And you will feel yourself balanced because this music attunes you to be together with the energies of the Universe. You sense yourself as an integral part of the pulsing world.

“God of Drum” is the newest release of Kari Hohne who undoubtedly is one of the most versatile people in the field of electronic music. Kari Hohne exemplifies the phrase “she wears a lot of hats”. Language preserver, master diver, best-selling author, tablet app designer, dream analyst, business consultant, Tai-Chi teacher and world traveler, Hohne created a unique musical project filled with unbridled power and boundless energy.

On the other hand the music of the album “God of Drum” is very sincere and natural. Filled with ethnic motifs it arouses emotions that were hidden deeply and gives release to them. So, one can say that the album "God of Drum" has a strong therapeutic effect and may be used for treatment of body, mind and soul.

All of these above mentioned features of the album "God of Drum” are certainly important. But maybe it has one more rare quality. This music is as wild as real life is.
Read more
Helpful
Comment Report abuse
See all reviews from the United States