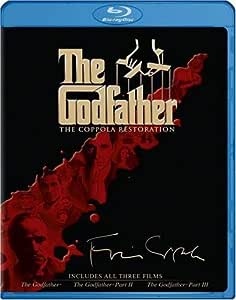 Francis Ford Coppola's Masterpiece features Marlon Brando in his Oscar-winning role as the patriarch of the Corleone family. Director Coppola paints a chilling portrait of the Sicilian clan's rise and near fall from power in America, masterfully balancing the story between the Corleone's family life and the ugly crime business in which they are engaged. Based on Mario Puzo's best-selling novel and featuring career-making performances by Al Pacino, James Caan and Robert Duvall, this searing and brilliant film garnered ten Academy Award nominations, and won three including Best Picture of 1972.

People used to say this was Frank Sinatra's world, and the rest of us just lived in it. After watching the multiple special features in the box set The Godfather - Coppola Restoration, one might conclude it's actually time for a cultural and historical revision: This is the Corleone family's world. The rest of us better tread lightly. Actually, the point of the half-dozen or so features crammed onto a disc accompanying the beautifully restored The Godfather, The Godfather II and The Godfather III, is that The Godfather movies have penetrated popular culture in such a deep and meaningful way that they are second-nature to everything. David Chase, creator of and writer on The Sopranos, for example, describes in the featurette "Godfather World" that his hit HBO series was intended to be the story of the first generation of mobsters actually influenced by Francis Ford Coppola's hit trilogy. Joe Mantegna calls the three films "the Italian Star Wars." (Mantegna co-stars in The Godfather III.) Alec Baldwin says no matter what one is doing, one is compelled to stop and watch the films if they're on television. Richard Belzer calls the films "a religion." And so on. A number of people similarly testify in "Godfather World" to the importance and ubiquitousness of The Godfather and its sequels in American life. There's no point in arguing, so its best to move on to the other featurettes, including "The Masterpiece That Almost Wasn't," reviewing in detail much of what has been said about Paramount's mistreatment of Coppola, about casting fights (Steve McQueen as Michael?), about the studio's assumption they were getting a quick-and-dirty B-movie, and about producer Robert Evans' determination to keep his choice of director and unlikely actors under his wing. Fresh information within the special features, however, begins with "… When the Shooting Stopped," a fine study of post-production on The Godfather, with several surprising and fascinating facts. Among emerging details is an explanation of why Michael Corleone's scream toward the end of The Godfather III is silenced out. (Hint: it was meant to be the inverse of a sound effect in the first movie.) "Emulsional Rescue: Revealing The Godfather" talks about the painstaking work of restoring the first two films, beginning with a phone call from Coppola to Steven Spielberg (after the latter's DreamWorks studio became part of the Viacom family) asking if he'd request money from Paramount for restoration work. "The Godfather On the Red Carpet is a negligible series of fawning statements about the movie from hot young actors, while "Four Short Films" are brief and enjoyable takes on different aspects of The Godfather's impact on modern living. --Tom Keogh

4.8 out of 5 stars
4.8 out of 5
3,258 customer ratings
How does Amazon calculate star ratings?
Amazon calculates a product’s star ratings based on a machine learned model instead of a raw data average. The model takes into account factors including the age of a rating, whether the ratings are from verified purchasers, and factors that establish reviewer trustworthiness.

Cari
5.0 out of 5 stars How could you say no?
Reviewed in the United States on March 26, 2016
Verified Purchase
How could you say no to this price and the Godfather trilogy? If you are a fan or the movies you cannot go wrong with this! I liked it so much that I went ahead and purchased more for my brothers. Great for yourself or gift.. the packaging looks good too!
Read more
59 people found this helpful
Helpful
Comment Report abuse

Amazon Customer
5.0 out of 5 stars The Godfather is home again
Reviewed in the United States on January 4, 2017
Verified Purchase
My son and I are both huge fans of the Godfather movies. He had these DVDs before, but he took them to a friends house for a movie night, and they were stolen. I ordered this from Amazon as part of his Christmas present. They arrived promptly, they were packaged securely for safe shipping, and they were new not used. And each movie has played as they were supposed to (no skips etc).
Read more
37 people found this helpful
Helpful
Comment Report abuse

George Alexander
4.0 out of 5 stars It’s great, but got big European box instead!
Reviewed in the United States on November 9, 2017
Verified Purchase
I ordered this set thinking it was going to be one case with all four discs inside it on flipper trays. What I got instead was a large box with four individial cases. The first three containing each film and the fourth containing the supplements. And this seems to be the European version, since it has all those rating icons on the discs. I didn’t send it back because I didn’t know any better back then. I thought at the time, well maybe thats how it is. But lately I’ve seen videos on YouTube that show the thinner box with flipper trays. No European film rating icons on them. So, beware.
Read more
22 people found this helpful
Helpful
Comment Report abuse

SeanTop Contributor: Baby
VINE VOICE
5.0 out of 5 stars 2/3 of a great trilogy
Reviewed in the United States on June 19, 2018
Verified Purchase
The Godfather is one of my all time favorite movies. Godfather II was also really good. These two movies pretty much cover what's in the book. The book is pretty much the first movie and all of the DeNiro flashback scenes from the second. The third movie? Well...it was a movie. You can put it on that long list of "Part III" movies that were much worse than the first two. X-men III, RoboCop III, Spiderman III, Alien III...the list goes on.

My original review was not posted because it was a review of the condition of the product when it arrived. Let's just say it was not a 5-star review. I'll say that the box it arrived in was in great shape, as well as the other products in said box.
Read more
16 people found this helpful
Helpful
Comment Report abuse

alankhorst
1.0 out of 5 stars Terrible video quality! Proceed with Caution!
Reviewed in the United States on July 30, 2018
Verified Purchase
This is one of my all-time favorite trilogies. However, we didn't sit down to watch it for quite some time after purchasing it. This was a new DVD, but the quality of the video was terrible! It had snow throughout the entire first movie, but it is now past my return window. The one star rating does not reflect the movie itself, but the quality of the DVD. If you buy this, watch it quickly so you can return it if needed.
Read more
15 people found this helpful
Helpful
Comment Report abuse

Livn4U
5.0 out of 5 stars GODFATHER SERIES All 3 movies collection
Reviewed in the United States on February 5, 2017
Verified Purchase
So Happy . :)))
All 3 movies are in 1 case.
((( F U L L S C R E E N ))) What I Wanted,, Which these days are Really hard to find !!! They offer CAPTIONS on all 3 movies, In English and other languages as well, and with these movies, In some scenes, You really need to see them. We have watched the 1st movie it's a Clear picture , good sound, We are on the second one now, So far so good, the same Clear picture and good sound. We tested the 3rd movie begining . The same as the other 2 movies.
Fast Shipment, and Good Price. New Sealed in plastic.We Will buy more from this seller ;)))
Read more
42 people found this helpful
Helpful
Comment Report abuse

Amazon Customer
3.0 out of 5 stars Used, not new
Reviewed in the United States on September 28, 2019
Verified Purchase
Discs appear to be in good condition but it looks like this is a used copy not a new one. The box wasn’t in great condition and the case itself was cracked. Additionally the plastic pieces that hold the discs are partially broken so the discs just fall right out when you open the case. I would expect better quality with paying $30.
Read more

Glenn Lord
5.0 out of 5 stars A Great Buy on a Great Movie Series
Reviewed in the United States on April 2, 2017
Verified Purchase
Three disk package of spellbinding interest. A true masterpiece I haven't seen in years. You will find yourself humming the music and wanting to eat Italian food just to keep the aura going.
Read more
14 people found this helpful
Helpful
Comment Report abuse
See all reviews from the United States

Maz
1.0 out of 5 stars Waste of money!
Reviewed in the United Kingdom on January 9, 2018
Verified Purchase
This item refused to play on our machine. I have yet to contact Amazon for instructions. What a waste of money! Husband very disappointed.
Read more
Helpful
Sending feedback...
Thank you for your feedback.
Sorry, we failed to record your vote. Please try again
Report abuse

Nikko
5.0 out of 5 stars A classic....
Reviewed in Canada on January 21, 2019
Verified Purchase
Should not miss from any house...
Read more
One person found this helpful
Helpful
Sending feedback...
Thank you for your feedback.
Sorry, we failed to record your vote. Please try again
Report abuse
Load more international reviews

Kathrine Davis
5.0 out of 5 stars Love it
Reviewed in Australia on March 29, 2019
Verified Purchase
It was a gift
Read more
Helpful
Sending feedback...
Thank you for your feedback.
Sorry, we failed to record your vote. Please try again
Report abuse

Sandra Patterson
5.0 out of 5 stars It worked. It came on time. I enjoyed it.
Reviewed in Canada on January 31, 2020
Verified Purchase
It gave me something different to watch. I bought it to see what the fuss was all about and why it won awards.
Read more
Helpful
Sending feedback...
Thank you for your feedback.
Sorry, we failed to record your vote. Please try again
Report abuse