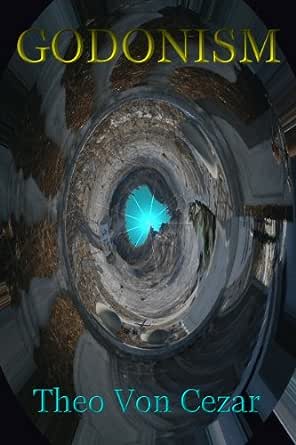 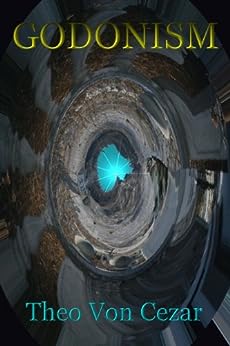 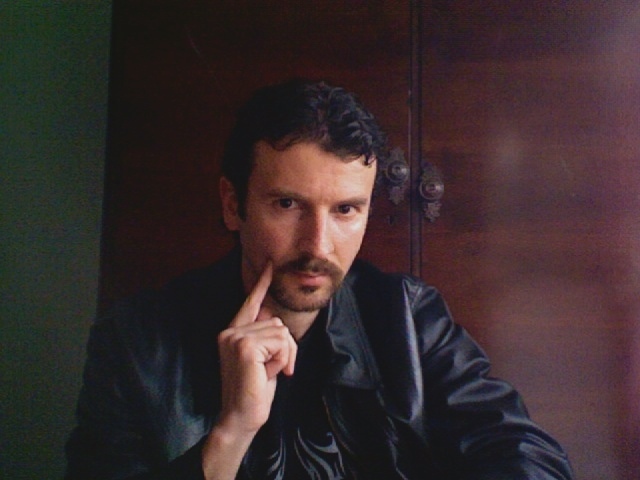 "Mind, universe, time, God. This is a real trip into the nature of consciousness, what is reality but a construct of our own minds ?
Maybe there isn't quite enough people interested in such ideas, it's a little too deep for our dumbed down society......at least that's how I see it. It's rather like the book of Revelation, full of symbolisms that are open to interpretation, who really knows what it means?
I think a lot of readers may find Godonism a little too 'out there' to maintain an interest from cover to cover. I hope I'm wrong, I think people should question their reality, or perhaps it's easier to simply go back to sleep.
- Lux River - YouWriteOn
'Godonism' by Theo Von Cezar, asks a lot from the reader. It's enjoyable, but you will need to really keep an open but focused mind while reading. I thought reading Cloud Atlas was difficult, but trying to understand this book was tough too. -- Goodreads
I must admit at the start I was getting bogged down with all the info. However, with each line I became slightly more engrossed until finally realising what a delightful piece this was.Extremely imaginative, and I ended up loving it. For me it had shades of 1984, but on a completely different level. Some great ideas in here, and I particularly liked the Mondocash idea, although of all it was very interesting i.e. the redemptive tickets.
-- YouWriteOn

'...While the wretched cohort of hominids was ignored by the animals − they were in charge now, being the beneficiaries of the most sophisticated minds − a huge snake with grown legs and arms bobbed up from nowhere, and taking off his top hat he gallantly bowed and bragged about the fact that he had acquired a new mind. "Now we are superior to humans," he said to an amazed Ahma, "and we are all eager to reform our instincts. Finally, there's justice among all the creatures inhabiting our earth." '

4.2 out of 5 stars
4.2 out of 5
13 customer ratings
How does Amazon calculate star ratings?
Amazon calculates a product’s star ratings based on a machine learned model instead of a raw data average. The model takes into account factors including the age of a rating, whether the ratings are from verified purchasers, and factors that establish reviewer trustworthiness.
Top reviews

Payal Sinha
4.0 out of 5 stars Godonism- Confusing, Absurd, Grey, and One of a Kind Book!
Reviewed in the United States on January 9, 2018
Verified Purchase
Godonism reminded me of Waiting for Godot by Samuel Beckett because both the story had the same grey setting, absurdness and a depiction of a dystopian society that has little to offer to its population save for beggary and death. Both the stories depicted tragicomedy in their sombre themes and somewhat comic presentation. Coincidentally there is a sameness in the name too. Theo Von Cezar paints a bleak picture of a commercialized world where nothing and nobody is true and future seems over for mere teenage boys. Here everything has a price and freedom is non-existent. Chaos and confusion rains everywhere and religion is more of a burden than a savior of path. The story aims to preach a message while providing us with entertainment. There are lots of food for thought. Although confusing at many instances Godonism is also one of a kind book and if you have time and want to engage in a different kind of book then this book is just right for you,
Read more
Helpful
Comment Report abuse

Grady HarpTop Contributor: Children's Books
HALL OF FAMETOP 50 REVIEWER
4.0 out of 5 stars ‘Those who ponder life can be scientists but those who ponder life and also death can be both – scientists and philosophers.’
Reviewed in the United States on November 5, 2017
Verified Purchase
Author Theo von Cezar has published nine novels of the dystopian fatalist nature. To add to the mystery of his works and to step away from the personalization of detailing his life to avoid misconceptions about the messages he believes and writes he offers only a photograph (young and intense) and his definition of this work as a dystopian fatalist.

While the craftsmanship of his novel GODONISM is richly imbued with a gift for the English language pushed to literary heights, the flow of the novel is at times daunting for the readers’ concentration. But give in to the fact that tackling this novel is an act of commitment and the rewards are there by book’s end.

Hints of this sci-fi dystopian fantasy are present in a few summations or preparations for this novel: ‘In a world ruled by a 'perfect' chaos, at the peak of the highest decadence, the falling of the everlasting gold, embraced by the savage anarchy itself, has started. It is a time when people have to pawn their souls, minds, spirits and other most valuable 'assets', so they can buy more measurable time, which means the prolonging of their very existence and agony. For time to come the survivors will be those who will follow only their instincts rather than following their judgments. For some of them it is time to turn to God whereas for the others - a few of them were left - it is time to ask anagrammatic questions at which others must find complex answers. Set in the year 159, Nebula Era – a future of most volatile times - when people have to pawn their minds in order to survive, and, at the peak of decadence, the falling of the everlasting gold unexpectedly comes. The two eighteen-year-old boys, Ahma and Jovian, through a scheme contrived by the head of the state, Alzegotha, and the mighty State itself, with the help of Black Petal – Alzegotha’s beautiful fiancee – and with the support of the Pawn House and MondoCash, are forced by the harshness of the times to embark on a struggle for survival and therefore have no other choice but to submit to Black Petal’s demand and start selling tickets for Hereafter.’

Or as Theo summarizes, ‘Ahma and Jovian, two eighteen-year-old boys, have been given the sack from Windmill Plant - an electricity generating company. They don’t have too many options left since the present economy (it is the year 159 of Nebula Era) can no longer sustain a population of fifty billions people. While roaming the streets of Nebula City, the boys are presented a choice by a guardian angel whom they meet in a building called ‘The Church of Nonbelievers.’ As long as they follow the instructions strictly and do not deviate from the plan, everything is going to be fine, the woman says, otherwise they will meet death or beggary. All they have to do is deliver tickets to Hereafter One and Hereafter Two. The sinners, when the time has come, will be granted eternal life in Hereafter. The boys accept the offer and things go as planned for almost two years. Then a revolt of all beggars erupts in Nebula City. This coincides with the elections for the mayor of Nebula City, which turns out to be a fierce battle in which the chief off all beggars also competes. By now the anarchy has spread throughout the entire city.

But to taste the flavor of Theo’s writing skills, the following excerpt from the Prologue follows: ‘It was the beginning of a chilly Zedober—the third month of that bloody year according to the new Nebula calendar. Making use of a thick power cord which they had found in a gutter in downtown Nebula and which they had vigorously tied around their waists so they could keep hold of each other, Ahma and Jovian kept walking in zigzag on Resurrection Boulevard through what appeared to be a never-ending blizzard. They had been wandering the streets of Nebula City for hours trying to take refuge from the vitriolic wind that cut savagely through the bare portions of their faces when they finally found themselves in front of an obscure dapple-grey building. They thought that the small temple-like architecture was the right place to spend the night in. CHURCH OF ALL NONBELIEVERS was engraved on the silver plate pinned to the timeworn frontispiece. And beneath it, WE SHALL FIGHT FOR KNOWLEDGE AND AGAINST THE DECAY OF OUR MINDS.’

After accompanying Theo on the journey he has written there are quotations from the author that offer insights into his philosophy. He deserves a wider audience for his work. Grady Harp, November 17

Germanrose
4.0 out of 5 stars A dystopian science fiction novel centered on two young friends ...
Reviewed in the United States on January 21, 2018
Verified Purchase
A dystopian science fiction novel centered on two young friends who after they grow up drift apart and have their own adventures. This book mirrored our current dysfunctional political society very closely throughout the entire book. Religion, afterlife, as well as the true value of currency (incl. gold) are also prominent themes throughout this book. At times the story seemed to drag on a bit, but for the most part this book as something /I could relate to. I was able to draw parallels to my own experiences even though this story is set in the year 159 and overpopulation is a big problem. Politicians are just blowing hot air to stay in power and the people finally have enough. Ahma and Jovian, the two boys get talked into selling tickets to the afterlife to make a quick buck as well as stay out of trouble with their guardian angel. An interesting story even if the plot moved slowly at times.
Read more
Helpful
Comment Report abuse

Kristen
4.0 out of 5 stars I felt like this was a really unique and interesting concept but ...
Reviewed in the United States on December 26, 2017
Verified Purchase
Godonism takes a look into the future, way way into the future. There are economic problems which lands two teens in a world of trouble which seem otherworldly. They stumble upon a unique church where an angel approaches them with a threat / job they need to complete. The book covers the journey the guys experience.

I felt like this was a really unique and interesting concept but it reading it was complex. Like there was more fluff and fantasy references then necessary. Typically I enjoy fast paced books but this was a bit too fast for my taste. Like I just needed a moment to understand what was happening.

I do think there is a lot of symbolism and societal references that keep things interesting. I can always appreciate a book that both entertains while trying to do a little bit of education at the same time.
Read more
Helpful
Comment Report abuse