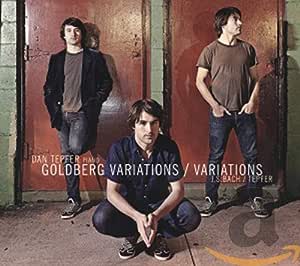 Dan Tepfer has created a kaleidoscopic experience with his solo album Goldberg Variations / Variations, the jazz pianist approaching J.S. Bach's masterpiece one of the classical canon's most totemic works as an inspiring font for creativity. Interspersed with his affectionate interpretation of the complete "Goldbergs" are his own improvised variations on Bach's variations. No Jacques Loussier-style swinging of the classics, Tepfer's variations are marked by a ruminative joy, spiced with contemporary dissonances and a deep feel for the source as timeless music beyond category.

Although the Goldberg Variations are beloved now as an entrancing, virtually sacred work of art, Johann Sebastian Bach published the score consisting of an "aria" and a set of 30 variations in 1741 as a keyboard study, with the piece later nicknamed for the harpsichordist who might have been its first performer. From Glenn Gould to Pierre Hantaï, the modern world's greatest classical artists have performed and recorded the "Goldbergs." Investing himself totally in music he has known since childhood, Dan Tepfer recorded his Goldberg Variations / Variations completely solo, even engineering the late-night sessions himself for total immersion in the process. The result is both utterly individual and genuinely moving.

Goldberg Variations / Variations is the 29-year-old, New York-based Tepfer's sixth album as leader or co-leader, following three heading a trio, one of solo piano improvisations, and another featuring duets with veteran saxophone luminary Lee Konitz. Known for his rare improvisational gift and a complex yet melodic approach to music-making, the prize-winning pianist has been hailed as "a player of exceptional poise" by The New York Times, while Downbeat extolled his "ability to disappear into the music as he's making it."

For those who deem Bach's music untouchable, they should remember Stravinsky's rejoinder to those who criticized his transformation of Baroque compositions in Pulcinella as disrespectful: "You `respect,' but I love," he said. As for Tepfer, he says: "What I'm doing is definitely loving. But instead of recording the Goldberg Variations and then writing lengthy liner notes about how I feel about them, I'm expressing how I feel about them in music, with my improvisations on Bach's variations. One challenge was switching gears playing this classical music that's a real test for me and for so many pianists, then the next minute really improvising and being free."

With Bach using the same chord progression throughout the Goldberg Variations, his musical process wasn't as different from jazz as it might seem. "That is really what we do in jazz, particularly when playing standards," Tepfer explains. "We take the chord progression of a tune, and it's often as simple as Bach's Aria, and we make variations on it. Lee Konitz has been playing the same tunes his whole life. One of the amazing things about him is you'll play the same song with him on tour night after night say, `All the Things You Are' and it will be really different every night. So if you recorded all of those and put them end to end, it might sound like what Bach
had done with the `Goldbergs,' taking one simple piece of material and weaving all these different emotional states into it. With my improvisations, it was a case of, how much more diversity can I get out of this chord progression? And what's really important to me as an improviser is to have a voice. So I'm reacting to Bach with my own tone, my own vocabulary."

"On his latest album, the 29-year-old pianist not only had the audacity to play Bach s Goldberg Variations he improvised on them. The results are elegant, thoughtful, and thrilling." --New York Magazine

Go Unlimited
Start your 30-day free trial
Stream Goldberg Variations / Variations by Dan Tepfer and tens of millions of other songs on all your devices with Amazon Music Unlimited. Exclusive discount for Prime members.
Sold by Amazon.com Services LLC. Additional taxes may apply. By placing your order, you agree to our Terms of Use.

4.2 out of 5 stars
4.2 out of 5
32 customer ratings
How does Amazon calculate star ratings?
Amazon calculates a product’s star ratings based on a machine learned model instead of a raw data average. The model takes into account factors including the age of a rating, whether the ratings are from verified purchasers, and factors that establish reviewer trustworthiness.
Top Reviews

Eugene J. Niemierzycki
4.0 out of 5 stars Recent discoveries
Reviewed in the United States on June 12, 2013
Verified Purchase
I have been listening to some great piano music performed/composed by a few relatively unknown artists. Some of it falls this side of classical, while other falls that side of jazz. A little bit of this, a little bit of that, I say. But it's no hodge podge. It isn't cheap fare. It is serious music in its own right. And much of it is improvised:

Tord Gustavsen Trio: The Well, Being There, The Ground, Changing Places. (you can't go wrong with any of these; he's one of my favorites)
Pieranunzi, Enrico: Jazz Improvisations
Dan Tepfer: Goldberg Variations, Five Pedals...
Stenson, Bobo: Serenity
Fort, Anat: A Long Story

Hopefully you will find the commonality I have found among these artists, but most importantly, love and enjoy it!

PS. The list is not entirely complete; I have been listening to Venezuela native Gabriela Montero. Ms. Montero's playing is Romantic - - warm, sensual, nostalgic, longing... The darndest thing is that I'm always drawn to her no matter what I'm involved with at the time. Montero playing has a quality that leaves an indelible mark in your subconscious. But be warned, this is not "straight" classical music. Ms. Montero is an improviser, but her music is so seamless, and the pieces work so well, that you feel as if they had been created like that all along in spite of the fact that she's playing another another Chopin, another Faure, not that much different from the first Bach,the first Chopin, etc.

I recommend Glenn Gould's interpretation of Bach's Goldberg Variations on Sony, "The Historic 1955 Debut Recording, etc." as a contrast to Montero style. Both great on equal planes and for different reasons. This is the definitive performance of Bach's Goldberg Variations, bar none ( I say). So isn't it true then that whenever we listen to a performer's interpretation of a given composer, that particular piece is being presented to us in a different form?(form not content). And aren't we listening to that piece with fresh ears? Isn't this then a form of improvisation? Are interpretation and improvisation musically analogous? Isn't Montero, for example, stradling that fence? The Olde Emperor a la Mode?

Wayne Porter
5.0 out of 5 stars Five Stars
Reviewed in the United States on May 17, 2015
Verified Purchase
Incredible!!
Read more
Helpful
Comment Report abuse
See all reviews from the United States

Mr H Oldenkott
5.0 out of 5 stars Bach Jazz contemplation at its peak!
Reviewed in the United Kingdom on November 3, 2016
Verified Purchase
If you like Bach, if you like Jazz, there is no better artist!
Read more
Helpful
Sending feedback...
Thank you for your feedback.
Sorry, we failed to record your vote. Please try again
Report abuse

Allan Yee
4.0 out of 5 stars Non-Gimmicky
Reviewed in Canada on February 28, 2013
Verified Purchase
I find most non classical harpsichord or piano arrangements of the Goldbergs to be fairly gimmicky. For instance, I would love, for novelty purposes, to hear (ONCE) an accordian arrangement that I saw this year on the shelf at my local CD shop, but I wouldn't pay to buy it. Anyway, I came across this version of variations on the variations at my local public library, borrowed it, listened to it enough times to like it, and so ended up purchasing it. The "straight" version of the variations is surprisingly good, on par w/ some others I have by other classical pianists and those interested in only that can likely program out Tepfer's improvised variations, some of which are more jazz inspired, which isn't surprising given his background.
Read more
Helpful
Sending feedback...
Thank you for your feedback.
Sorry, we failed to record your vote. Please try again
Report abuse