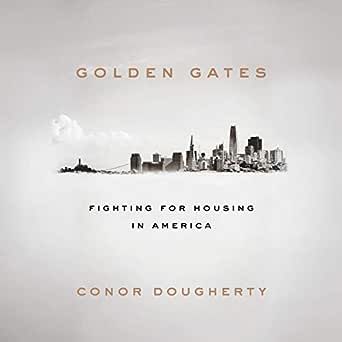 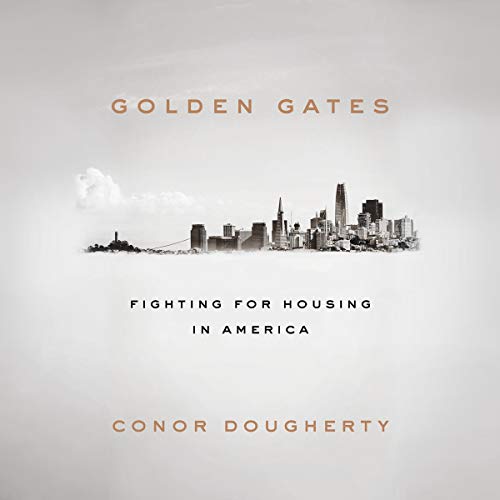 4.8 out of 5 stars
4.8 out of 5
49 customer ratings
How does Amazon calculate star ratings?
Amazon calculates a product’s star ratings based on a machine learned model instead of a raw data average. The model takes into account factors including the age of a rating, whether the ratings are from verified purchasers, and factors that establish reviewer trustworthiness.

AK
5.0 out of 5 stars Well reported, engaging book on why we should all be concerned with housing
Reviewed in the United States on February 22, 2020
Verified Purchase
Golden Gates is superb. The book combines gripping storytelling with outstanding reporting on a complicated issue. Dougherty tells the story of the California housing crisis through the stories of a few key players--whose names you have (probably) never heard of--but who come across with all the quirks and passions as people you would love to have dinner with, even if you don't agree with them. The reporting is first class--and makes you wonder why you didn't know all of this before. Dougherty makes the case that are failed housing policies--driven by racism, a winner take all economy, and just plain old bad policies--are not only a reflection of the inequality in our system, but also a prime driver of it. Hard to read this book and not learn alot---but it reads like a collection of character driven short stories--so you will enjoy it as you do.
Read more
5 people found this helpful
Helpful
Comment Report abuse

ERATRE
5.0 out of 5 stars A superb and balanced history of America's housing crisis
Reviewed in the United States on March 3, 2020
Verified Purchase
Like it or not, America's housing crisis impacts us all, but most of us don't think about it all that deeply. We either dump our paychecks into expensive mortgages, because that's what we've been taught is the financially responsible thing to do. Or we dump our paychecks into rent, hoping one day we'll be able to participate in America's great housing scheme. How did it get this way? "Golden Gates" gives you the answer, told through the stories of real people with compelling stories that illustrate the problems.
This book doesn't attempt to shove "solutions" down our throat. Rather, it's meant to inform and it does that well, with authoritative and easy-to-read writing. I finished it in a weekend. The great writing's no surprise, as Conor Dougherty honed his skills at The Wall Street Journal and the New York Times.
I didn't feel optimistic that this crisis is going to be solved any time soon. It made me think of housing more like healthcare. The solutions are going to have to be big and probably led by government, but there's going to be so much opposition to those ideas, that the public's understanding of the problem needs to evolve. I hope books like this will move us in that direction.

Timothy
5.0 out of 5 stars The makings, and hopefully the unmakings, of the California housing crisis
Reviewed in the United States on March 6, 2020
Verified Purchase
A New York Times reporter lived a parallel life to mine from 2014 to 2018, had similar interests and experiences to me, and wrote it in this book. Besides being a well-written story and a great primer in California housing policy history, for me it's a bizarrely personal story. I know many of the people in the book, and was in the room for several of the events described. It's funny to see events I know well reexamined through another's eyes. Even the last scenes of the book are the same events that concluded my housing advocacy story. I'm not sure I have the same optimism the author does, but I sure hope he's right.
Read more
2 people found this helpful
Helpful
Comment Report abuse

Evan Goldin
5.0 out of 5 stars Gripping read on one of the most important issues facing America
Reviewed in the United States on March 22, 2020
Verified Purchase
I just finished Golden Gates, and strongly recommend it to others who are interested in housing — through a lens of inequality, urban planning, transportation, climate changes or just curiosity of a good story.

Conor Daughtery weaves together a fascinating story of various people who are fighting (whether voluntarily or forced into it) for a change to the way we build housing in California. I've personally followed housing news pretty closely for the past few years, but I still learned a ton from Golden Gates.

Hearing the inside story of the rise of the YIMBY movement was unique and insightful, as was the story about the city manager of Lafayette's evolving views on housing. Great read!

Frederic G. Marks
5.0 out of 5 stars Important, excellent, enjoyable to read and has my highest recommendation
Reviewed in the United States on March 8, 2020
Verified Purchase
There is an excellent review by Alex Shulman already herein that says everything I would like to say about this outstanding book. I recommend Mr. Shulman's review to those interested in buying Golden Gates.

I bought the book as soon as I read a foretaste of it in Mr. Dougherty's op-ed in the New York Times of February 16 entitled Build, Build, Build . . .

I thought before that I understood the reasons for the dysfunctional real estate market, for owners and renters alike, but Mr. Dougherty added a great deal to my understanding.

Dougherty does a great job balancing the history, policy, and economic issues with human stories about the people dealing with these issues. Highly recommended.
Read more
Helpful
Comment Report abuse

Marshall Grodin
5.0 out of 5 stars America's housing crisis, through the Bay Area looking glass.
Reviewed in the United States on June 2, 2020
Verified Purchase
I live in the town of Lafayette where a key "battle" has been fought. I know two of the key sources in Conor Dougherty's work. His gift is to tell both the small, local story through engaging personalities, and to shine a light on the longer arc of housing history in California. That history includes a post-war housing boom, segregation, discrimination, civil rights, white flight, redevelopment, restrictive covenants, redlining, Prop. 13, homelessness, high tech and a shift from housing as a shelter in the night to an investment commodity. It's rare that we can get a complex story in a .knowledgeable, reader-friendly style
Read more
Helpful
Comment Report abuse

Bryan Lozano
5.0 out of 5 stars Helps you understand a massive issue in America
Reviewed in the United States on March 26, 2020
Verified Purchase
Housing is hard and complicated. Conor does an amazing job with history, narratives, and people to help you understand it and how big the problem is across the country. Although it's primarily in the lens of the Bay Area, the issues and problems, although impossibly outsized in the Bay, feels familiar and understood. Well worth the read.
Read more
One person found this helpful
Helpful
Comment Report abuse
See all reviews from the United States