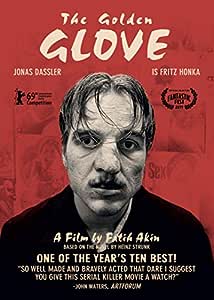 Based on the best-selling novel of the same name, acclaimed filmmaker Fatih Akin (Head-On, The Edge of Heaven, In The fade) delivers a gruesome tale of notorious German serial killer Fritz Honka as he haunts Hamburg's red light district in the 1970s, frequenting his favorite bar of boozy castaways, the Golden Glove, and chasing after any lonely woman he might just be able to lure into his attic.

A powerfully... must see vision of a serial killer in full bloom. --Screen Anarchy

One of the most disturbing serial killer movies in decades. --Slash Film

Amazon Customer
4.0 out of 5 stars You will need a bath and a bible after watching this, and that’s a good thing.
February 11, 2020
Format: Prime VideoVerified Purchase
What the crap did I just watch? This is the most realistic movie I’ve ever seen, by an extremely wide margin. This entire thing is filthy, dirty, grimy, greasy, gritty, and unapologetic. Post WW2 Germany is under a microscope here, and you will not like what you see. Every character is unredeemable in some way. The women victims are the after thought of a fledgling society- all broken down, dirty, out of shape shells of there former selves. The men at the bar are a bunch of overgrown adolescents, waxing on about which hole or crease you can use on a woman’s body for pleasure. The killer is probably the most depraved, socially inept, disgusting human being ever committed to celluloid, and his deplorable actions are surpassed only by his inability to acknowledge his filthy living conditions, and his lack of empathy for the female human. He would rather live in the stinch of decaying flesh, than dispose of the dismembered body parts. He truly believes that the female is here for the taking, if he so pleases. His depraved state of drunkenness and psychopathy grows and grows, until he finally finds the subject of his desire. This truly is a one of a kind experience, that couldn’t possibly have been made in Hollywood, but the acting is absolute perfection. You truly feel like you’re watching the actual people as they live out the worst parts of their lives. The director really transforms a movie set into a real, tangible place. It’s as if someone went back in time and placed invisible cameras around this guy, then brought them back to our time, and edited together the footage. I swear you can almost smell the sweaty, dank, smoke filled decay of this man’s world. Visceral, unflinching, and hard to watch at times, if you are looking for an unforgettable movie going experience that makes Henry look like Heidi, grab a barf bag and pull a stool up to the bar.
Read more
2 people found this helpful
Helpful
Comment Report abuse

Femme Fatale
2.0 out of 5 stars Why?
February 15, 2020
Format: Prime VideoVerified Purchase
This was the first movie I literally had to turn off a little under halfway through. Whatever descriptive you can think of that goes beyond the realm of completely disturbing and utterly gruesome is exactly what this movie embodies and with no real payoff, making it feel gratuitous. As someone who reads about and watches a fair amount of serial killer documentaries, I must admit that I had no prior knowledge of the protagonist, Fritz Honka except for the brief synopsis given about the movie itself. I did do a little bit of post research to learn more about him after getting through as much of the movie as I could stomach and there are quite a few discrepancies (but that's to be expected).
Since there was no real attempt to answer the question of who or why, what you are left with is basically just a string of disgusting scenes filled with sex and violence in the grittiest and seediest of settings. And the movie does a good job of engulfing you in the dirty and disparaging. While the acting is superb, the storyline leaves little to be desired. It honestly plays out like a poverty-stricken snuff film. Not for me.

NobodyImportant
5.0 out of 5 stars This is not just a serial killer movie!
January 29, 2020
Format: Prime VideoVerified Purchase
Well, yes it is, but to judge it based on a comparison to the endless queue of cookie cutter serial killer films/series is to miss its fearless approach to the ugliness and sadness of life at the bottom of any society. Please take a look at the many positive IMDB reviews before dismissing it based on the professional critics inability to see past their own preconceptions. It is hard to watch, but these are real people, not characters in a bogus thriller.
Read more
One person found this helpful
Helpful
Comment Report abuse

Brian A. Bergman
4.0 out of 5 stars Exceptional but hard to watch
February 16, 2020
Format: Prime VideoVerified Purchase
This is a rendition of a true story about a serial killer who lived in the skid row area of Hamburg circa 1974. The circumstances were ultra realistic and gut churning. You can't stomach watching but you can't turn away either.
Read more
Helpful
Comment Report abuse

aaron
1.0 out of 5 stars Horribly Disturbing
February 13, 2020
Format: Prime VideoVerified Purchase
I don't understand this world sometimes. No one needs to know about what this man did. Even victims (not that they deserved what happened to them) were disturbing.
Read more
Helpful
Comment Report abuse

Ricky Pisano
5.0 out of 5 stars A journey of insanity
February 11, 2020
Format: Prime VideoVerified Purchase
Based on a true story of depravity and insanity on the low rung of society in the red light district of Hamburg, Germany, 1970-74. Excellent job.
Read more
Helpful
Comment Report abuse
There are 6 customer reviews and 8 customer ratings.
See all 6 customer reviews
Write a customer review