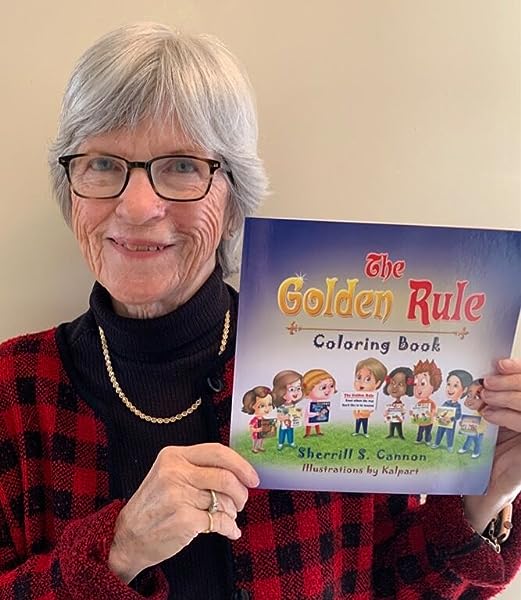 by Sherrill S Cannon (Author)
3.3 out of 5 stars 3 ratings
See all formats and editions
Sorry, there was a problem loading this page. Try again.

I am a mother of four and a grandmother of ten, and I am also a Multi-Award-Winning Best-Selling Author! My books have received ninety-six 2011-21 National and International awards. My newest children's book, "The Golden Rule Coloring Book" has just been released and is a coloring book version of my still available best-selling "the Golden rule". It follows "Peter and the Whimper-Whineys Coloring Book" which is a coloring book version of my still available best-selling "Peter and the Whimper-Whineys" and has already received an H.M.in the Royal Dragonfly Awards for Children's Activity Book. "David's ADHD", is a recipient of 13 Awards including a Gold medal in the Book Excellence Awards, 1st place in Purple Dragonfly plus an HM, Gold Medal in FAPA Awards,1st Place the Purple Dragonfly Awards plus H.M.in a 2nd category, 2 Silver medals from Feathered Quill, Winner of Barefoot Librarian Award plus Silver medal in Reviewer's Choice, Bronze Medal in eLit Awards, and a Pinnacle Achievement Award. My poetry book, " A Dime is a Sign" has already won 10 Awards in Feathered Quill, Reader Views and Pinnacle Achievement, Book Excellence,FAPA President's, Global eBook, Readers Favorite, New Apple Summer eBook, Royal Dragonfly and TopShelf Winner - and is a companion volume to my first book of poetry "A Penny for Your Thoughts" which has been released in hard cover as well as soft cover and eBook and has won 12 Awards: Gold Medals: Feathered Quill Awards, Reader Views Reviewers Choice, Reader Views Innovative Poetry, Los Angeles Book Festival, eLit Book Awards, New Apple eBook and New Apple Book, Top Shelf Winner and Pinnacle Achievement, and won the Silver Medal in the FAPA Awards and the Bronze in the Global eBook Awards. "My Little Angel"has won a Gold Medal in the Global eBook Awards, Bronze Medal in the Feathered Quill Awards, a Royal Dragonfly HM, a New Apple Book Finalist, a Readers' Favorite Finalist Award and a Pinnacle Achievement Award. "The Golden Rule" has won a Gold Book Excellence Award, a Gold eLit Award, Silver Reviewers' Choice Medal, a IAN Book of the Year Finalist, a Mom's Choice Award, a Children's Literary Classics Silver Medal plus Seal of Approval, and a Pinnacle Achievement Award. "Mice & Spiders & Webs...Oh My!" has won a Global eBook Gold medal, a FAPA Awards Bronze medal, Reader Views Reviewers Choice HM as well as a Readers' Favorites HM Award in Children's Educational, and also a Pinnacle Achievement award... What an amazing time!!! My website is www.sherrillcannon.com

I have been writing poetry since before I could write! (My mother wrote down the poetry I wrote as a four-year-old.) I have written eleven published rhymed children's stories, and two poetry books - as well as seven published rhymed musical plays for elementary school children, which have been performed internationally in over 20 countries. I love to write. My friends and family ask me if I think in rhyme and meter, and I have to admit that sometimes this is true!

Most of my books try to teach something, like good manners and caring for others. "Santa's Birthday Gift" is an attempt to include Santa in the meaning of Christmas. (After I read a story of the nativity to my young granddaughter, she looked at me and asked "But where's Santa?") The story is best for ages 3-9, to be read to children who still believe in Santa!

"Peter and the Whimper-Whineys" is designed to help parents cope with whining and complaining children. Peter is a small rabbit who does nothing but whine. His mother warns him that if he keeps on whining and crying, he'll have to go live with the Whimper-Whineys. His nocturnal adventures convince him his mother was right! If only he can get back home... A review editor for this story wrote: "I cannot imagine any parent or guardian not wanting to read this book to their child!...Parents everywhere applaud you!"

"Peter and the Whimper-Whineys Coloring Book" is a replica of the above book, with the illustrations traced so they are colorable.

"The Magic Word" is a story of a little girl who has to learn to say Please! It stresses the importance of good manners and thinking of others.

"Gimme-Jimmy", is a story about how a bully learns to share, and seems to have become popular quickly! Jimmy's New Polite Rule stresses thinking of others and being polite.

"Manner-Man" is about a Superhero who helps children cope with bullies, and look within themselves for their own inner superhero. It incorporates many of the characters in m previous books, as well as their character traits. Consideration for others is a constant theme!

"My Fingerpaint Masterpiece" deals with perspective, perception and self-esteem as a child paints artwork in class, and later discovers it as part of the town's Art Contest

"Mice & Spiders & Webs...Oh My!" is story that illustrates the importance of being a good listener. It also is a cute introduction to basic computer terms.

"The Golden Rule" shows children how to be kind, and to imagine how wonderful it would be if everyone followed the Golden Rule: Treat others the way you'd like to be treated.

"My Little Angel" is about the day in the life of a small child who has a little guardian angel named Angela sitting on her shoulder and guiding her through her day. With an angel on your shoulder, you are never alone!

"A Penny for Your Thoughts" is not a children's book, but it is a poetry book of feelings - of love and friendship and all various associated emotions.

"A Dime is a Sign" is a companion volume of poetry to A Penny for Your Thoughts, with similar content and layout - all about feelings into words!

"David's ADHD" is designed to help children with ADHD learn to manage their behavior issues and become accepted in the classroom...and make friends!

"Peter and the Whimper-Whineys Coloring Book" and "The Golden Rule Coloring Book" are both coloring book versions of the original books above, but with the illustrations traced so that youngsters (and oldsters) can color them creatively.

Here's a little bit of my background: A real-live Eloise, I grew up in the Willard Hotel in Washington DC (my Dad was the manager), was married and lived in Northern Virginia for twenty years where my husband and I raised our four children. We later moved to Bucks County (Philadelphia PA suburbs) where we lived for 14 years before moving to the Binghamton NY area for 18 years, and we have just now moved back to Bucks County PA. We celebrated our 60th wedding anniversary in June! We are now retired, and we travel in our RV from the east coast to the west coast each year to spend time with our children and grandchildren. I have had a varied career: I was a teacher and coach for ten years in the Washington DC area, and then became a "stay-at-home-Mom" who in my spare-time was a professional newspaper sports photographer and columnist for several years when our boys were playing competitive soccer. When our girls became interested in theater, I became a Dinner Theatre Company Stage Manager (as well as lighting and sound technician) and also was an Assistant Talent Manager for Cathy Parker Talent when our youngest daughter was doing commercials and professional modeling in NYC. When we relocated to the Binghamton NY area, I became the Business Administrator for a software development company handling payroll and contracts. Now I have time to write, when I'm not marketing (which is the other half of writing.) I spent many years collaborating with my daughter on rhymed musical plays for her elementary school, and now seven of our plays, "Have You Seen My Little Lamb", "The King's Spell","When You Wish Upon a Star...fish", "The Wonderful World of Weather", "ABC December" , "The Alphabet Trip" and "We Have Character" are available at Lazy Bee Scripts - www.lazybeescripts.co.uk. The plays have already had many performances in over 20 countries including the United States and the United Kingdom, as well as Australia, Austria, Botswana, Cambodia, Canada, China, Egypt, France, Germany, Ireland, Italy, Japan, Philippines, Poland, Singapore, Spain, and the United Arab Emirates. I am trying to "make a difference".

There are also video trailers for my books on You Tube. Please visit my website/blog at http://www.sherrillcannon.com, my author website at http://sbprabooks.com/sherrillscannon and also my SBPRA Author Fan Page on Facebook, www.tinyurl.com/Author-Sherrill-S-Cannon and become a fan! Please let me hear from you!

J. C. Powelson
5.0 out of 5 stars The Golden Rule Coloring Book Rules!
Reviewed in the United States on February 9, 2021
Verified Purchase
When my daughters were younger they enjoyed Sherrill Cannon's original illustrated, "The Golden Rule" and all of her delightful children's books. "The Golden Rule" is written in Cannon's characteristic rhyming prose, which makes reading--and learning--fun! Both the illustrated and coloring editions help children learn about doing the right thing and treating other people well. The coloring book is a great way to teach children these important life lessons, but it also encourages their artistic skills. What better way to drive the book's message home than to allow kids to color the line drawings in their favorite colors and customize the illustrations to fit their own style! The story itself is a great teaching tool, but the coloring edition allows children to be more interactive and strengthens the book's valuable message.
Read more
One person found this helpful
Helpful
Report abuse
See all reviews
Back to top
Get to Know Us
Make Money with Us
Amazon Payment Products
Let Us Help You
EnglishChoose a language for shopping. United StatesChoose a country/region for shopping.
© 1996-2021, Amazon.com, Inc. or its affiliates