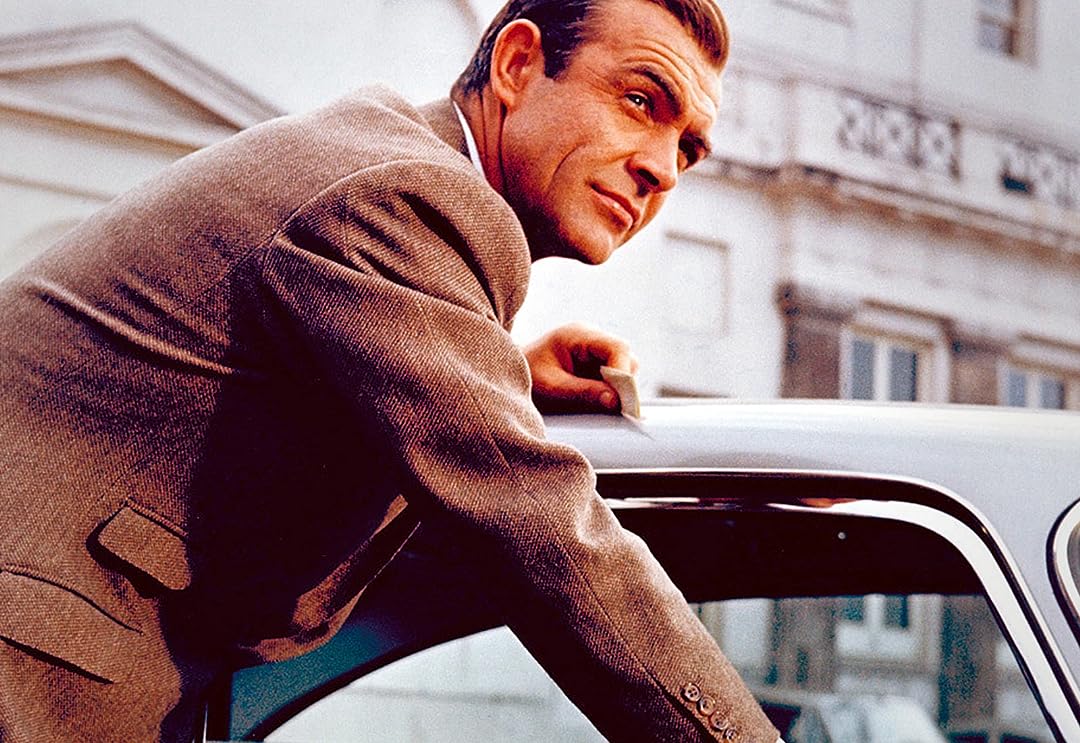 (3,708)7.71 h 50 min1965X-RayPG
Goldfinger is stockpiling gold reserves. Bond investigates, and uncovers an audacious plan to commit the heist of the century.

joel wingReviewed in the United States on March 9, 2020
5.0 out of 5 starsTHE best James Bond film
Verified purchase
Goldfinger in my honest opinion was the epitome of the entire James Bond franchise. Dr. No was important because it set out all the themes and tropes that would appear in all the subsequent movies. Goldfinger was when they all came together at their absolute best.

The movie starts with a great spy scene where Bond blows up a facility, then gets with a woman, only to escape an assassination attempt. Connery is his usual cool and collected self, such as when the bombs go off and he just looks around like nothing happened.

Then it gets to the heart of the story where Bond attempts to undermine Auric Goldfinger’s, played by Gert Frobe, Operation Grand Slam to corner the market on the world’s gold supply by attacking Fort Knox. The two run into each other in Miami when Bond finds Goldfinger cheating at cards and undermines him with the help of a beautiful young lady named Jill Masterson, played by Shirley Eaton. They of course hook up afterward, only for Bond to be knocked out and then he finds her dead, covered in gold paint. That’s one of the most iconic Bond scenes ever. Bond then chases Goldfinger around the world until they end up in Kentucky for the climax. That includes humiliating Goldfinger again at a game of golf and being captured by Goldfinger and having the classic exchange, “Do you expect me to talk?” “No Mr. Bond I expect you to die.” Finally, Connery runs into another classic Bond girl, Pussy Galore played by Honor Blackman who is part of Goldfinger’s scheme.

For me, Connery is the pan ultimate Bond. He had the looks, the swagger, the sexism, and the feel for the character like none other. In this film he also gets plenty of gadgets to play with which set a standard for the following films. The most iconic is his Aston Martin car.

The title song is another excellent tune by Shirley Bassey. It might be the best Bond theme ever.

All together this is the best of the best. You get Sean Connery at his peak. You get the spy tools. You get a classic Bond villain and two of the best Bond girls. There’s action, there’s adventure, there’s sex. It’s a Bond movie!

Elvis41330Reviewed in the United States on November 5, 2019
5.0 out of 5 starsHONOR BLACKMAN PASSED AWAY YESTERDAY AT 94 4/12/20 she will never be forgotten
Verified purchase
I am 62 yrs old and a Bond fanatic but strictly of amateur status.....This is an iconic movie, clearly that`s axiomatic. I particularly prefer Sir Sean Connery in the role. However, I am astounded over the casting move to hire Daniel Craig for the role. Obviously, someone knows their job very well. Anyway, this movie was a first in many categories. Maybe someone can help me out. Amazon`s x-ray notes said Goldfinger was the first Bond movie to be shown on commercial TV, and the date was like 8/72. HERE`S my problem....I watched this movie in 1966 or 1967 in Pepperell, MA laying on the living room rug. I remember it clearly because I had Pneumonia. That`s one I guess I`ll have to live with? Oh Well? BTW, Sir Sean never set foot on US soil to make this movie, Goldfinger either, it was done at Pinewood Studios in England. I find this astounding especially because of the stable scenes, I would have bet money that was filmed in KY, but evidently..not so..Did you ever notice that the director rarely will show gas prices? I figure it dated the movie? One more thing, notes said this is the only Bond movie that does not end with him at sea? In Live and Let Die did it not end on a train?
13 people found this helpful
Report abuse

C. MatthewsReviewed in the United States on June 1, 2016
5.0 out of 5 starsOne of the classics
Verified purchase
I have very much enjoyed that Amazon has put most of the James Bond series online. The series defined a generation of spy thrillers and suspense storytelling that has influenced much modern filmography. Dr. No is certainly a classic, but Goldfinger refined and perfected that James Bond has become, and Sean Connery defined 007. Gert Frobe played an Auric Goldfinger, providing an almost believable villain in a way that was not over the top as some more recent villains. He didn't overact. One of my favorite exchanges:

Bond: Do you expect me to talk?
Goldfinger: No, Mr. Bond, I expect you to die.

One of the fatal flaws in evil overlords is the tendency to monologue while the hero gets ready to escape. Goldfinger didn't do that, preferring to get rid of his potential competition, whether a shady Mafia character or a British Secret Agent. I still enjoy the professionalism of Bond in this movie. While there's some humanity in him, there is not the angst over people dying. It's part of the business, and we don't need to see what comes after the movie is over when Bond goes off to hibernate for several days after a harrowing adventure.

If one were to view only three movies in the Bond franchise, it would be to watch Dr. No, Goldfinger, and Thunderball, probably in that order. These movies provide great classic entertainment.
23 people found this helpful
Report abuse

Erica MoonReviewed in the United States on June 23, 2016
5.0 out of 5 starsBest Bond Movie - Argue if you want!
Verified purchase
It's got all the classic elements - pretty villainess, pretty dead girlfriend, Bond being elegant, nasty villain with inventive plot to rule the world, elaborate way to kill Bond that doesn't work, the BEST henchman, cool cars, spy gadgets and Sean Connery being basically awesome. Oh, and Fort Knox. To me, when someone says, "Bond movie," this is the one that immediately comes to mind. Mike Meyers even made one of the Austin Powers movies a spoof of this. If you want to watch just one James Bond movie, this would be the one.
22 people found this helpful
Report abuse

JGReviewed in the United States on June 1, 2016
5.0 out of 5 starsA lot to enjoy!
Verified purchase
You have to remember how long ago this was released to really appreciate it, and you have to remember James Bond is unquestionably one of the most memorable and enduring of cinema heroes. The stunning film (real film) photography no longer in vogue today and the bright clear colors only film can provide, the special effects (not computer enhanced), the writer's vision of future technology and how it wasn't so far off...so many things to enjoy. The plot? Fundamentally absurd but a fun romp into a scheme that might have worked in 1964. The whole thing was supposed to be fun, actually. I don't know if it was ever meant to be as popular as it has become, but sit down with ice tea and a bowl of popcorn and pretend it isn't 2016. I think you'll be glad you did.
15 people found this helpful
Report abuse

Joseph LaCerraReviewed in the United States on December 8, 2018
1.0 out of 5 starsDated and Overrated
Verified purchase
I sort of enjoyed this movie when I saw it as a teenager. Now, upon revisiting it, I find it boring, dated and definitely over-rated. Connery's smirking over-sexed Bond is not particularly well acted, all women are just sex accessories, ripe for (easy) conquest. And the plot is infantile. Also, is not Bond the worst secret agent on the planet? He announces his presence everywhere he goes, provides his actual name (twice) to everyone. He is at pains to be always conspicuous. This is really a poor outing.
5 people found this helpful
Report abuse

Fairy FlairReviewed in the United States on July 17, 2017
5.0 out of 5 starsLegacy of groundbreaking.
Verified purchase
Another legendary classic from the year 1964 comes 007 Goldfinger starring Sean Connery. I've been watching a lot of old school Bond lately and this movie's one of them. I have two different DVD releases of this film, the 1999 Special Edition and the 2006 Two-Disc Ultimate Edition.

One of my favourite films!
7 people found this helpful
Report abuse

HopefulConsumerReviewed in the United States on December 9, 2020
5.0 out of 5 starsperfect cinema
Verified purchase
The third in a series of 27 fantasy adventure films so far -- and the best. Amoral, carnal, cruel, ridiculous, gritty, dreamlike. James Bond is an enigma -- he presents as a suave, macho, priapic superman -- who works as a spy, apparently for the adrenaline rush and the . . . . Pussy Galore, his superwoman match in this outing, is a hard-headed martial arts expert and pilot, who commands a squadron of lovelies in her flying circus. Goldfinger is the arch villain of arch villains: fat, elegant, rich, vaguely nazi. Full of hi-tech gadgets, car chases, exotic fight scenes and iconic cinematic deaths. And wit. It is an adult comic book: imagine a tv Batman episode but without the silly costumes, and played realistically, with a pg-13 sex scene every 15 minutes . . .
Report abuse
See all reviews
Back to top
Get to Know Us
Make Money with Us
Amazon Payment Products
Let Us Help You
EnglishChoose a language for shopping. United StatesChoose a country/region for shopping.
© 1996-2021, Amazon.com, Inc. or its affiliates