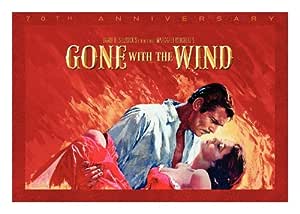 Period romance. War epic. Family saga. Popular fiction adapted with crowd-pleasing brilliance. Star acting aglow with charisma and passion. Moviemaking craft at its height. These are sublimely joined in the words Gone with the Wind.

This dynamic and durable screen entertainment of the Civil War-era South comes home with the renewed splendor of a New 70th-Anniversary Digital Transfer capturing a higher-resolution image from Restored Picture Elements than ever before possible. David O. Selznick’s monumental production of Margaret Mitchell’s Pulitzer Prize-winning book can now enthrall new generations of home viewers with a majestic vibrance that befits one of Hollywood’s greatest achievements.

David O. Selznick wanted Gone with the Wind to be somehow more than a movie, a film that would broaden the very idea of what a film could be and do and look like. In many respects he got what he worked so hard to achieve in this 1939 epic (and all-time box-office champ in terms of tickets sold), and in some respects he fell far short of the goal. While the first half of this Civil War drama is taut and suspenseful and nostalgic, the second is ramshackle and arbitrary. But there's no question that the film is an enormous achievement in terms of its every resource--art direction, color, sound, cinematography--being pushed to new limits for the greater glory of telling an American story as fully as possible. Vivien Leigh is still magnificently narcissistic, Olivia de Havilland angelic and lovely, Leslie Howard reckless and aristocratic. As for Clark Gable: we're talking one of the most vital, masculine performances ever committed to film. --Tom Keogh

Also on the disc
The Ultimate Collector's Edition of Gone with the Wind is beautifully restored for Blu-ray, showing off how good a movie can look even many decades after its release. The second Blu-ray disc has a wide variety of bonus material. New for the Ultimate Collector's Edition are two 2009 documentaries: 1939: Hollywood's Greatest Year is narrated by Kenneth Branagh and summarizes the famous films that debuted that year, including Gone with the Wind, The Wizard of Oz, Stagecoach, and Mr. Smith Goes to Washington; "Gone with the Wind: The Legend Lives On" is a 33-minute study of the legacy of the movie, with interviews of film critics, Ted Turner, former Georgia Senator Max Cleeland, and surviving cast member Anne Rutherford (Careen O'Hara). Also new for the UCE is Moviola: The Scarlett O'Hara War, a 1980 television movie that dramatizes the casting of Gone with the Wind, starring Tony Curtis, William H. Macy, Sharon Gless, Morgan Brittany, and others. Much of the rest was on the 2004 four-disc edition, including the commentary track by Rudy Behlmer and documentaries on Clark Gable, Vivien Leigh, other actors, and the filming and restoration of the movie. The third disc is a double-sided standard DVD of the documentary MGM: The Lion Roars, and the UCE comes in an oversize box with a beautiful photo book of stills and theatrical posters, reproductions of studio correspondence and a publicity booklet, a soundtrack CD sampler, and art cards. --David Horiuchi