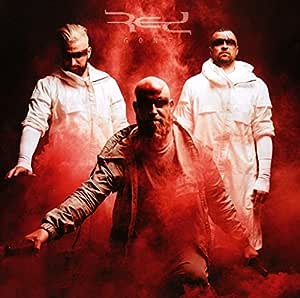 4.6 out of 5 stars
4.6 out of 5
132 customer ratings
How does Amazon calculate star ratings?
Amazon calculates a product’s star ratings based on a machine learned model instead of a raw data average. The model takes into account factors including the age of a rating, whether the ratings are from verified purchasers, and factors that establish reviewer trustworthiness.
Top reviews

Musicfan1984
5.0 out of 5 stars Incredible stuff. Worth it for "Singularity" alone.
Reviewed in the United States on October 28, 2017
Verified Purchase
Huge fans of these guys. I was a big fan of Release the Panic when it came out, an album that was quite divisive with the fan base. I say that bc this am I'm is somewhat similar. The differences are that it's A LOT heavier, darker, and more complex. The strings were dialed down ever so slightly over the entire album. They are there, tons of places are engulfed with them, but it's not a main focus. What is on their place is a SUPER dark electronic element. Listen to "a.i " and tell me that's not a bit creepy. But man is great. And that last song? Singularity? Infreakingcredible. Beautiful, dark, haunting, explosive. Somewhat similar to "shadow and soul", only not quite as heavy as that one. Could become my favorite Red song. You need this album.
Read more
2 people found this helpful
Helpful
Comment Report abuse

Medina Family
5.0 out of 5 stars Great New Sound but Still Great RED!!!
Reviewed in the United States on September 8, 2019
Verified Purchase
It has some new twists on some chorus and sounds but overall this is RED and the style of writing is nicely put together! They have the ability to communicate greatly the internal struggle of the human heart while living in this world. Evil and Good are always at war within us and the good news is God is still with us through it all. This album is one of my favorites because they take you to different trips every song to places you are familiar with. One of their best albums to date aside from "Until We Have Faces." hard to do but they did it, now it's gonna be hard to top this one.
Read more
Helpful
Comment Report abuse

WriterMama92
4.0 out of 5 stars A few great songs
Reviewed in the United States on June 27, 2018
Verified Purchase
I had to listen to this music for at least two months to appreciate the best songs on the album. "Losing Control," "Chasing Your Echo," "Coming Apart," the Rob Grav3s version of "Gone" and "The Mask Slips Away" on the deluxe edition are by far the best songs on the album.

I was disappointed in the album because I love every song on all their previous albums. "of Beauty and Rage" was their magnum opus.

WriteReadFred
5.0 out of 5 stars They outdid themselves. Again.
Reviewed in the United States on November 7, 2017
Verified Purchase
Every time RED releases an album and I give it a listen, I think, “Wow, now THAT is amazing. They can’t do better than that one.” But then they do, with the very next album. It’s fun to watch the progression. Yet, it’s also reassuring to know I can listen with confidence, trusting that RED will always be the original, raw, and highly dynamic RED. Each new release/phase only enhances what they already are with a few more innovative twists in their sound. Exciting package. Bravo!
Read more
One person found this helpful
Helpful
Comment Report abuse

Not Available
4.0 out of 5 stars musical change
Reviewed in the United States on May 24, 2018
Verified Purchase
It was a bit of a shock to me as I bought this album without any research. The change from hard rock/metal to a more electronic sound through me for a loop and initially made me hate the album. after listening to it a few months after purchasing it i found that the new sound had a certain appeal to it and it finally won me over.
Read more
Helpful
Comment Report abuse

Larry M. Rivers
5.0 out of 5 stars RED has their foot on the throat of this genre...
Reviewed in the United States on March 7, 2018
Verified Purchase
MY GOD! I really don't know what to say, I'm truly lost for words. What an absolute miraculous accumulation of Beauty and Talent. Red is got to be one of the most innovative and creative bands of our age. Every song is Powerful and Energizing, fresh and new. Michael has such a unique voice and ability to use it. These guys together and yoked are absolutely Un-Stoppable, which is one of the songs on the record... They tell it like it is and keep the listener so intrigued and eager for more. I don't know that it can get better. Every song is a masterpiece. Really and truly one of my new favorite bands. I hope they became more recognized, they deserve it and have their foot on the throat of this genre... Deo Volente...
Read more
One person found this helpful
Helpful
Comment Report abuse

funshopping
4.0 out of 5 stars I love "Gone" and "Unstoppable"
Reviewed in the United States on June 1, 2018
Verified Purchase
New sound, a bit more mellow. Still all RED with the classic Barnes vocals. I love "Gone" and "Unstoppable". Not my favorite RED album, but still worth it. Unstoppable is a great weight lifting song - gives you 10% more strength or you're not listening.
Read more
Helpful
Comment Report abuse

Kamrie
3.0 out of 5 stars Meh
Reviewed in the United States on December 16, 2017
Verified Purchase
Certainly wasn't their best album, too short for my taste. I love these guys to death but this album was lacking in so many ways that the last one proved they could make so brilliantly possible. Not my favorite but its better than the "release the panic" album.
Read more
2 people found this helpful
Helpful
Comment Report abuse
See all reviews from the United States

Mr Christopher Morford
5.0 out of 5 stars Brilliant .
Reviewed in the United Kingdom on October 26, 2017
Verified Purchase
Another simply brilliant album . One of their best . Great vocals .
Read more
One person found this helpful
Helpful
Sending feedback...
Thank you for your feedback.
Sorry, we failed to record your vote. Please try again
Report abuse

Michael G Farrah
3.0 out of 5 stars Three Stars
Reviewed in Canada on December 12, 2017
Verified Purchase
CD case was cracked upon arrival, since it is a gift this is somewhat bothersome.
Read more
Helpful
Sending feedback...
Thank you for your feedback.
Sorry, we failed to record your vote. Please try again
Report abuse