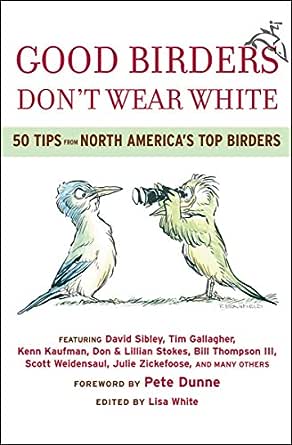 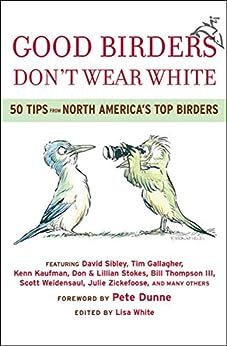 This collection of essays, by 50 contributors (David Allen Sibley and Don and Lillian Stokes are probably the most well-known), supplies 50 tips for bird-watching, and here are a few: take field notes, hug your tour leader, think like a migrating bird, linger even after you have listed a bird, play fair when sharing a scope, go birding in bad weather, go birding with kids, learn birdssongs, and keep your binoculars clean. Experienced bird-watchers will be familiar with most of these tips, but the book is a delight to read and will generate new enthusiasm for the hobby. The 25 black-and-white line drawings are hilarious. George Cohen
Copyright © American Library Association. All rights reserved --This text refers to the paperback edition.

LISA A. WHITE is executive editor of nature and field guides at Houghton Mifflin Harcourt in Boston, Massachusetts.

PETE DUNNE forged a bond with nature as a child and has been studying hawks for more than forty years. He has written fifteen books and countless magazine and newspaper columns. He was the founding director of the Cape May Bird Observatory and now serves as New Jersey Audubon’s Birding Ambassador. He lives in Mauricetown, New Jersey.
--This text refers to the paperback edition.

4.6 out of 5 stars
4.6 out of 5
113 global ratings
How are ratings calculated?
To calculate the overall star rating and percentage breakdown by star, we don’t use a simple average. Instead, our system considers things like how recent a review is and if the reviewer bought the item on Amazon. It also analyzes reviews to verify trustworthiness.
Top reviews

A. Smith
5.0 out of 5 stars Hilarious & Informative
Reviewed in the United States on February 11, 2017
Verified Purchase
For the experienced Birders, you might say, Been There, Done That, etc. On the other hand, you might like it, as it could back some Birding memories. For the rest of us, this is a funny read & provides some well needed Tips. In my case, I had no idea that people actually use iTunes recordings to (my phrase) trick birds to come in to an area. (So I tried it in my back yard, a Great Horned Owl came swooping in, yikes!!) Please get the book, its each Chapter is better than the one before.
Read more
17 people found this helpful
Helpful
Report abuse

Kathryn Pon
5.0 out of 5 stars "Question Authority: Good Birders Sometimes Wear White"
Reviewed in the United States on February 24, 2015
Verified Purchase
Among these 50 essays there is something for each reader. Having sampled an essayist's voice, the reader can choose to buy this author's work, to go on that leader's birding trip, to read deeper into the subjects. For me, this mulligatawny is perfect: I may be replacing my Zeiss 10X40's, reconsider the effect of using my iBird calls, rethinking photos and weather patterns. I've ordered a bird distribution book for my area. I may or may not change my bird feeding setup. Perhaps I'll even advocate more. Maybe I'll even join a birding tour. All of this and more inspired by this book. And then there's the bigger philosophical question from this "Question Authority: Good Birders Sometimes Wear White": keeping context in mind- in birding and in life
Read more
11 people found this helpful
Helpful
Report abuse

R. Houser
5.0 out of 5 stars How to be a better birder
Reviewed in the United States on March 15, 2015
Verified Purchase
This is collection of essays from some people who have been birding long enough to know that it is not just about checking off birds on a list. If you are a "lister" you may not think this book is for you because you already know all there is about birding. But the predominant theme in this book has to do more with enjoying birding more. If you take time to really watch the birds and not focus on your list you will become a better birder. At least that is what I got out of it.
Read more
10 people found this helpful
Helpful
Report abuse

Rabid Reader
4.0 out of 5 stars Wear High Boots, Too
Reviewed in the United States on March 3, 2017
Verified Purchase
This is the cutest little book!

It's fast and easy to read--a collection of amusing (and smart) essays that pretty much any birder will 'get.' Short works, that you can get through in a few minutes. Or set down.

It wasn't my expectation that this would teach me much about birding, but that I might learn tid-bits here and there & in general be entertained, and I was. Especially by the info on cleaning optics...it was like having my late father, birder all his life & gizmo aficionado, lecturing me, again, for those pesky fingerprints...

Robin G. Sowton
5.0 out of 5 stars Interesting collection of essays by your favorite birders
Reviewed in the United States on August 29, 2015
Verified Purchase
This is a nice collection of 50 short essays by many well known birders. These essays cover a broad range of the birding experience, including topics such as Jeffrey Bouton's 'Using a storm to your advantage' and David Sibley's 'Learn by drawing.' Rather than read this book from start to finish, I've preferred to read a few essays from time to time. The information and insights here have encouraged me to pursue my birding at a deeper level.
Read more
7 people found this helpful
Helpful
Report abuse

birddog
5.0 out of 5 stars Great fun to read.
Reviewed in the United States on July 29, 2018
Verified Purchase
Broad view of a delightful hobby for some to a consuming passion for others. I particularly enjoyed hearing the voices of so many whose names I recognize from field guides, books, magazines and apps. I should have also said how much I enjoyed the wonderful sketches
Read more
One person found this helpful
Helpful
Report abuse

John Carlson
5.0 out of 5 stars I enjoyed this book very much
Reviewed in the United States on November 15, 2017
Verified Purchase
I enjoyed this book very much. The short essays were easy to read as well as being informative. It was full of good advice and stressed good birding etiquette. Now I know why good birders don't wear white (though I already knew it). A really good book that I do suggest is a must read.
Read more
3 people found this helpful
Helpful
Report abuse

Helen
4.0 out of 5 stars Good fun
Reviewed in the United States on December 18, 2020
Verified Purchase
Some sage advice with a great deal of laughter. A gift idea for family and friends. Great illustrations too. You’ll recognize many of the birding authorities.
Read more
Helpful
Report abuse
See all reviews

Stew255
4.0 out of 5 stars Entertaining beak size advise
Reviewed in Canada on December 26, 2019
Verified Purchase
The accomplished share their thoughts and suggestions on how to be a better birder. Varied and applicable this is - a great intro to the joy of birding and what birders get out of it.
Read more
Report abuse