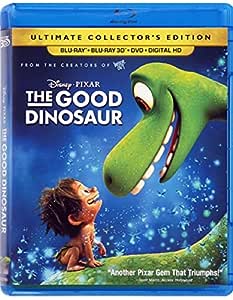 Jeffrey Wright (Actor), Frances McDormand (Actor), Peter Sohn (Director) & 0 more Rated:
PG
Format: Blu-ray
4.7 out of 5 stars 8,878 ratings
Extra Savings 5% off with promo code ADC5CODE. 1 Applicable Promotion
Available at a lower price from other sellers that may not offer free Prime shipping.
Digital Copy Notice: The purchase of this DVD or Blu-ray disc comes with rights to access a complimentary digital version from the production company. To access the digital copy, redeem the code included in your product packaging before the expiration date. Learn more

The Characters of The Good Dinosaur

From the innovative minds of Disney-Pixar comes a hilariously heartwarming adventure about the power of confronting and overcoming your fears and discovering who you are meant to be. THE GOOD DINOSAUR asks the question: what if the asteroid that forever changed life on Earth missed the planet completely, and giant dinosaurs never became extinct? In this epic journey into the world of dinosaurs, an apatosaurus named Arlo makes an unlikely human friend. While traveling through a harsh and mysterious landscape, Arlo learns the power of confronting his fears and discovers what he is truly capable of. Bring home this original story full of humor, heart, action and imagination, perfect for the whole family!

4.7 out of 5 stars
4.7 out of 5
8,878 global ratings
How are ratings calculated?
To calculate the overall star rating and percentage breakdown by star, we don’t use a simple average. Instead, our system considers things like how recent a review is and if the reviewer bought the item on Amazon. It also analyzes reviews to verify trustworthiness.

jon f
3.0 out of 5 stars Weird story. Seems out of synch with Pixar's style
Reviewed in the United States on January 31, 2019
Verified Purchase
SPOILER ALERTS

First off, pay a lot of attention to the vital first few minutes of the film. We didn't pick up on the fact that this was supposed to be THE asteroid and hence the entire movie takes place in an apparently alternate timeline from ours, a timeline where dinosaurs never died out. If you miss that implication, as we did, you'll spend a lot of the movie scratching your head.

I lost count pretty early in as to how many sharks this movie manages to jump over. Worse than the last 15 minutes of Dory even. I could maybe accept that these dinosaurs evolved intelligence, but how they built a sort of agrarian culture without opposable thumbs or tools is confounding. They plow fields with their nose (without worrying about bruises, breathing, or getting their nostrils plugged with dirt); they chop down trees by simply swiping their tail clean through the trunk in a single blow; they irrigate their fields by sucking up thousands of gallons of water into their lungs then blowing it across the field like a sprinkler. They build houses, silos, weave nets, set traps, and construct primitive seeding machines with nothing but their mouths. And this is all within the first 10 minutes or so of the film.

The dinosaurs in this film are apparently made of some sort of indestructible rubber substance. It's odd enough seeing an apatosaurus scaling vertical cliffs, but when they drop off of hundred-foot precipices and suffer no more harm than a few scrapes and temporary sprains and bruises it's a bit hard to swallow. Mud is apparently indelible and indestructible once applied to stone, in spite of raging storms that routinely cause massive flash floods downstream but somehow never wash away the homestead or even the simple footprints on the wall.

I’ve barely scratched the surface. I guess I can only suspend disbelief so far.

The characters seem kind of flat and uninteresting. No one with any of the charm of Dory, or Mater, or Buzz Lightyear. I couldn’t bring myself to care too much about anybody. The “Lion King moment” was predictable from the beginning. Motives were really hard to figure out: why did “Spot” follow Arlo around and try to help him; why would Arlo so quickly forgive Spot when Spot was responsible for — (well, watch the movie and find out); what the hell was up with the crazy styracosaurus? And so on. The obligatory Pixar touching-and-poignant plot resolution was confusingly unnecessary (why should “Spot” have to go off with the random strangers that show up when he has the best friend in the world already… just because they’re the same species as him? Our dogs don’t have to run off with every random dog family that shows up). This stole the thunder from the second and more important touching-and-poignant conclusion, which was so completely downplayed it almost goes by unnoticed.

On the plus side, the visuals are, in the Pixar tradition, stunning. Unbelievable sense of reality to everything except the animal characters. It’s just beautiful to watch. The complete disconnect between the incredible realism of the graphics and the utter nonsense of the storyline and situations may be the chief reason the film is confusing. If it was Wile E. Coyote I wouldn’t even care. Young children probably won’t care either. So if you want to watch a magnificent piece of computer animation, and your kids like a story with dinosaurs, you really might actually enjoy this film.

Douglas Wallace
5.0 out of 5 stars Charming family-oriented alternate reality with stunning animation!
Reviewed in the United States on June 15, 2016
Verified Purchase
Very charming family-oriented movie with great animation! When I say family-oriented, I don't mean that it's just safe for kids to watch, but that at its heart is a theme of what it means to be a member of a family. The premise of the movie is that the extinction of dinosaurs didn't happen 65 million years ago, (the asteroid misses the earth), and we have an alternate reality where dinosaurs (Arlo's family, the T-Rex family he later meets) have advanced to the point of being able to talk and run farms (for the plant-eaters) and cattle ranches (the T-Rex's). Humans are not the dominant species, as pack animals similar to wolves, they live in families (the theme, again), are intelligent hunter-gatherers, and haven't developed speech yet.

If you don't get caught up in the paleobiology and such realities that Apatosaurs were extinct millions of years before T-Rex was around, and other logical flaws (remember, it's just a movie), it's very enjoyable and fun. In homage to earlier Disney flicks, they retained the stylistic form of the mid-century Disney dinosaurs (think of Dino in the Flintstones rather than the realism of the raptors in Jurrasic Park movies).

The writing is well done, with verbal humor that is surprisingly subtle for a kid's movie. I enjoyed scene after scene of just the dialogue. The human critter, Spot, has no dialogue, but his facial and body language are superbly done.

The bonus features are very interesting, and one part explains the fallacies in the movie, setting the record straight, as well as detailing the people involved in making the movie, and how the movie developed from their experiences on their research working with a real family who runs a ranch.

Though the dinosaurs are stylized and somewhat cartoonish, the animation of the environment is jaw-droppingly realistic. It's clearly based on Yellowstone or the Grand Tetons parks, trees' leaves and needles sway in the winds, the moving clouds throw shadows on the hillsides, the coloration of the river pebbles and the dinosaurs' skin textures are hyper-realistic, the water in the rivers and ponds realistically move and scatter the light. In some scenes, as the "camera" pans around, there are computer-generated artifacts of internal reflections of the sunlight on the camera "lenses" that just subtly pop in and out to make you think that a real camera was being used, when you know it wasn't, which shows how painstakingly the artists worked on this! It's a very clever trick that subconsciously works well.

If you have kids, then get this and watch it with them, you may find that you enjoy it more than they!
Read more
29 people found this helpful
Helpful
Comment Report abuse

Jim Nasium
5.0 out of 5 stars A little closed minded to alternate lifestyles
Reviewed in the United States on September 20, 2018
Verified Purchase
This movie is a tribute the nudist revolution stirring beneath our very own noses.

First off, there’s nudity in every scene! The titular character and his whole family live on a commune and are 100% in the buff the entire movie. In fact when a young homeless child shows up, he is met with aggression and distain just because he is clothed.

Near the end of the second act more clothed people try to save the boy from the nudists. But peer pressure from the nudists forces the clothed boy to turn his back on his own kind - echoing the harsh reality set upon him in act one.

(Spoiler) In the end, the two main characters (one nudist, one never nude) realize their lifestyles are not compatible and they go their separate ways, each returning to the sanctity and comfort of those who do share their lifestyle.

It’s fairly close minded if you ask me. However one could argue that the lesson to be wary of nudist strangers has value in today’s society.

David Are
3.0 out of 5 stars OK if you have kids. Adults will pass.
Reviewed in Canada on March 28, 2016
Verified Purchase
I like Pixar films but there's just something about this one that I don't like. I guess this is good for children but as an animator myself I felt like it could have made a good TV movie instead of a feature Pixar film. To be honest I can't even finish it. I've tried watching it 4 times now and I can only get half way without falling asleep or doing something else. The story leaves a lot to be desired.
Read more
2 people found this helpful
Report abuse

Norrin Radd
4.0 out of 5 stars So-so story within superlative animation.
Reviewed in Canada on September 9, 2016
Verified Purchase
First I must say that I was not too crazy about the over dramatic and sad storyline. But I have never seen such perfection in nature, landscapes, trees, rocks and waters in animation. Besides the somewhat caricatural characters, the settings are superlative. Get it for its new standards in animation!
Read more
Report abuse

B
1.0 out of 5 stars Not what we expected!
Reviewed in Canada on July 31, 2020
Verified Purchase
First the good, product arrived on time. Not so good, item was previously opened then resealed. Looks like it was used. Ordered brand new item. Very disappointed. Not happy!!!
Read more
Report abuse

Page 1 of 1 Start overPage 1 of 1
This shopping feature will continue to load items when the Enter key is pressed. In order to navigate out of this carousel please use your heading shortcut key to navigate to the next or previous heading.
Back
Next
Pages with related products. See and discover other items: disney 3d, disney movies box set, 3d disney movies, 3d movies