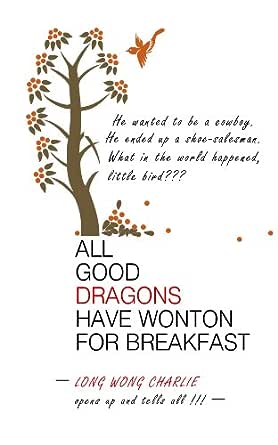 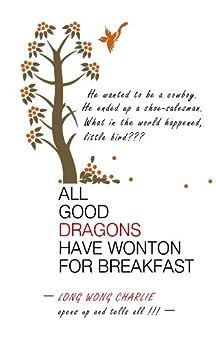 All Good Dragons Have Wonton for Breakfast Kindle Edition

Noel Donovan
5.0 out of 5 stars Dragon has a Bite & Packs a Punch!
Reviewed in the United States on September 8, 2014
The uniqueness of this novel is that it manages to not only illustrate several landscapes, but that it also places the reader right alongside the quirky characters within these landscapes.

The novel takes place in Houston, Texas. The characters are mostly Vietnamese-(although there is some ironic banter about cultural stereotypes!) however, the visual descriptions lend the feel of a film noir set in the smoky, side streets of a city like Paris, London, or New York. One can feel the unstable pavement beneath one's feet as one makes his way with the lead character--Binh--under starlight and streetlights. The people Binh cavort with, are not those usually found running carefree in the daylight.

Which brings me to the crux of the story; Binh's search to belong in a culture which places an inordinate amount of value on: wealth, physical appearance, career, family and present circumstance. I have read quite a few stories that have dealt with issue of cultural identity within the American landscape. Long Wong Charlie's novel does so in a way that grab's the reader by the sleeve, pulls him in, and won't let go until the last page. The writer's humorous examination of what at times could be a weighty subject is filled with delightfully flawed characters who provide an equal measure of comedy and drama. I found myself taking the characters very seriously because they were so well written, and yet, they gave me the surprising one-two comedic punch when I least expected it.

This is one dragon story that provides an equal measure of bite, wit and farce. I highly recommend!
Bree D.

Mary Maxwell
5.0 out of 5 stars A Humorous and Exciting Book
Reviewed in the United States on September 13, 2014
All Good Dragons Have Wonton for Breakfast is a wonderful book that will surely give laughter with each page. The way Charlie Wong expressed the life of a Vietnamese man named Binh is filled with authenticity that one can easily relate with. Throughout the book, slowly unraveling, are Binh's misfortune, which are deliciously served in the most humorous way. Each page is filled with fun and excitement as we discover how the short Vietnamese man deal with the "Dragon Curse" that have been following with him since the time of his birth. It takes us to a journey of love, acceptance, and contentment of who we are.

All Good Dragons is a must-read. Charlie Wong certainly is a very promising writer, and this book is surely something you don't want to miss.
Read more
Helpful
Comment Report abuse

Christopher Bradbury
4.0 out of 5 stars Fun and Funny
Reviewed in the United States on September 8, 2014
Charlie Long Wong's writing has an energy that pulls you along almost against your will. Short, punchy chapters and kinetic dialogue will have you knee-deep in main character Binh's life before you realize what's happened. Which all boils down to a reading experience that is fun and engaging, if a little dark at times.

Binh is cursed, and that's all you need to know because Wong makes that concept his playground. Part slapstick, part biting social satire, All Good Dragons Have Wonton for Breakfast also has a lot to say about life as an immigrant, the importance of relationships, and that old chestnut, accepting who you are. But the author pulls that off with wit and charm, and a wild and memorable cast of characters who, like Binh, try and fail, and try again to find peace, love, and understanding in a charred American landscape. A good read that has plenty of surprises. I highly recommend this book.
Read more
Helpful
Comment Report abuse

R. Reyes
5.0 out of 5 stars I recommend reading this novel to anyone who loves to get hooked with a nice book.
Reviewed in the United States on September 13, 2014
It starts with an intriguing beginning. A particular clever sense of humor, sometimes sarcastic, is always present, which makes the story fun. The author keeps the plot interesting because there are various stories happening simultaneously. It’s not your usual book, it has a unique way of storytelling, I like the way it goes. There are no loose ends at the end like in some books I’ve read before. For me the outcome of the story is satisfactory.
Read more
Helpful
Comment Report abuse

Marija Nikolovska
5.0 out of 5 stars Wisdom trough humor
Reviewed in the United States on September 14, 2014
When I started reading “All Good Dragons Have Wonton for Breakfast” I had specific expectations because of the book’s unique title, but as I continued through its chapters, I was taken in a totally different direction. I entered the world of Binh, a person who believed that being cursed was the cause to all of the unfortunate things in his life. In the end, Long Wong Charlie has managed to deliver wisdom trough humor. This novel is an excellent journey, a soul searching feat that anyone can relate to, no matter what their cultural heritage.
Read more
Helpful
Comment Report abuse

Lynn Barton
2.0 out of 5 stars Two Stars
Reviewed in the United States on December 26, 2014
too slow for my taste.
Read more
Helpful
Comment Report abuse
See all reviews