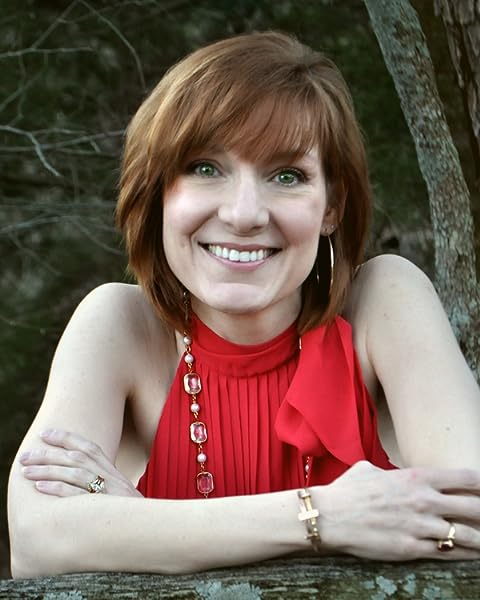 Shawna's writing journey started with a dream --- an actual, nighttime dream. The story within her dream captivated her to the point that she became obsessive, and in order to put together all the little details and fill in the gaps, she had to write it down. Now she has two books based upon it. Shawna is an Inspirational Romance writer, who loves creating complex, flawed characters, believing that's the secret to making them real. And as an inspirational author, she is able to write about God's Grace through her characters' humanity. She also loves including a good dose of nostalgia in her work, which is why her stories tend to take place in small towns during the first half of the 20th century. When she's not writing, she's spends her time with her husband and three children, reads, makes jewelry, and enjoys life on her family's ranch.
Tell the Publisher!
I'd like to read this book on Kindle

4.7 out of 5 stars
4.7 out of 5
6 customer ratings
How does Amazon calculate star ratings?
Amazon calculates a product’s star ratings based on a machine learned model instead of a raw data average. The model takes into account factors including the age of a rating, whether the ratings are from verified purchasers, and factors that establish reviewer trustworthiness.
Top Reviews

She Writes!
5.0 out of 5 stars Shawna Williams does it again!
Reviewed in the United States on April 1, 2012
Verified Purchase
I've enjoyed every bok I've read by Ms. Williams. She really knows how to tell a story and is a great writer. She does an excellent job of developing characters that you'll fall in love with, glued to your seat, turning pages, unable to stand it until you find out what happens next.

Ms. Williams' novels are often considered "edgy" because she writes about real life. Even so, her books are very tastefully done even though she sometimes approaches situations that are gritty and true to life. In my opinion, this novel was woven through with the theme of trust. When people keep secrets, are they really who they seem to be? Are they hiding behind a smoke screen? When people don't trust others, they often miss out on some of the greatest blessings in life.

The hero and heroine in this novel couldn't be more different. The hero grew up in a mansion, raised by upper society. The heroine grew up poor and destitute, from a family with a less than stellar reputation. She stives to keep her past a secret, which leads to anxiety-laden situations.

I don't want to say much more for fear of giving away Ms. Williams' plot. If you choose to give this one a try, you won't be disappointed. It's part of a series, but if you've not read the others, it can be read and easily understood.

Courtney
5.0 out of 5 stars Deep and Delightful
Reviewed in the United States on November 1, 2011
The Good Fight is the third book I've read by Shawna Williams and it follows the story of Jakob and Meri from No Other and In All Things. However, The Good Fight is more about Meri's "ex-boyfriend" Roger from way back before she married Jakob. After the break-up between Meri and Roger, Roger took a good look at his life and decided he needed to change the way he lived. He changed his career and his goals in life and was moving on with a new lady named Anna. There is new lady in town though that is holding his thoughts captive and he finds himself intrigued by her.

I have to admit when I first got really involved in this story and realized it was mostly going to be about Roger, I was very disappointed. I wasn't real interested in reading about Roger, and all I wanted was more about Jakob and Meri. It didn't take me long though to get invested in Roger's story and I found myself rooting for him to have a happy life and to make peace with his past and his future!

Shawna Williams has a way to her writing that pulls on your heart strings and causes you to think!! The Good Fight is another beautiful tale of forgiveness and honesty. Have you ever been embarrassed by your family so much that you just decided you wouldn't claim them as family? You'd just go on with your life with a new identity and try to forget the shame that person brought to your family name. It was easy to relate to the character Penney that dealt with this shame. I can't imagine the situation she was in and I loved the message of this story. God is in the business of taking broken pieces and turning them in to masterpieces!!

There is so much to love about The Good Fight; we have a mystery thrown in this story that adds a lot of suspense to this story that was delightful. There is also plenty of romance that had my blood pumping and my face a smiling! The characters are flawed, deep and meaningful and the story is unique and entertaining!! I will keep my eyes posted for more by this great author!!

Content: I consider this Edgy Christian Fiction so I believe it's for more of a mature audience.

I received a copy of this book free from the author in exchange for my honest review!! My honest review is this is a great book!! I read all three of these books in 1 week, they were so good!
Read more
2 people found this helpful
Helpful
Comment Report abuse

B. J. Robinson
5.0 out of 5 stars A Five-Star Story of Depth
Reviewed in the United States on November 19, 2011
The Good Fight by Shawna K. Williams released November 1, 2011, by Desert Breeze Publishing, Inc. It's twenty-nine chapters of inspiration, a sweet 20'th Century historical, a plus novel, so you'll get your money's worth. I normally don't read a lot of historical romance, but this one captivated me as the third novel in a series. No Other and In All Things are the first two. I loved all three. In this one, you're introduced to a new character, Pennye Boyle Carrington, and a character from the first novel comes back to life, Roger Talbot. Pennye and Roger grew up with nothing in common, both living different lifestyles. Roger is captivated by her the first time he sees her in the courtroom, but even when he finds himself falling for her, he doesn't really know who she is. Will it make a difference when he finds out she's the sister to a man he's prosecuted for murder? Pennye sees herself as an elephant that can never be a butterfly and each time she allows herself to hope, her heart and spirit are crushed. Dare she allow Roger to get close? Even though he sees her as a butterfly will he think her an elephant when he finally discovers who she really is? She left her hometown and reinvented herself. She really is Pennye Carrington, but she has to confess to Roger, sooner or later, that she's Pennye Boyle, was married, is divorced. She puts it off and can't bring herself to risk losing him, but she vows she'll tell him soon. He takes her to church with him, and she meets judgment head on in the eyes of an old high-school enemy. Has she waited too late to confide in Roger? She came back to help her brothers. She can't let Roger get in the way. The church confrontation assures her she'll always be an elephant, and she runs again. How far will she go this time? Roger was raised by a wealthy family, and she was raised by a poor one. They're from two very different worlds, and Roger deserves a butterfly, or does he? Can a social butterfly make the real man he is truly happy? Pennye wears clothes with kittens on them. She'll never be a social butterfly. Would she even want to be? What happens when a red-headed elephant falls head over heels for a man the whole town expects to marry a fine woman of good standing? Will Pennye always be judged by her family? Can she ever be her own person? Can she save her brothers? Not without Roger's help. What's an elephant to do? The author weaves a tale with depth and precision that will evoke reader emotions. You'll laugh. You'll cry. You'll love the ending. I did. It's so touching, and both characters truly have to fight the good fight. Question is, can they both win it? This is a five-star story of depth.
Read more
Helpful
Comment Report abuse
See all reviews from the United States