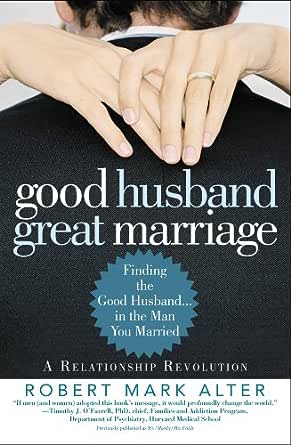 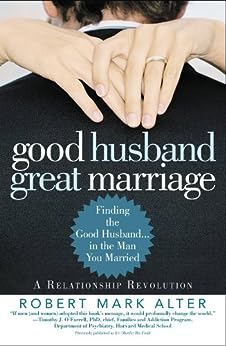 Alter is a practicing psychologists. --This text refers to an alternate kindle_edition edition.

Moose Berry
5.0 out of 5 stars A book either spouse can appreciate
Reviewed in the United States on February 2, 2020
Verified Purchase
So being a man and knowing how plenty of my male friends act, I can truly say that the premise of this book is sound: men, it is our fault. Robert isn't afraid to call a spade a spade and in reading this book you'll either recognize things you've done or someone you know has done. Things you more than likely ought to stop doing to make both your life and your spouse's easier.

Put your pride aside and give it a read. Ladies, give it a read as well and make him read it. Regardless of where you are in your marriage, I highly recommend this book and truly believe it's lessons can bring about change if you take them to heart.

G. Emmert
5.0 out of 5 stars If you have a religious spirit, you will not be able to swallow what this man says.
Reviewed in the United States on May 12, 2018
Verified Purchase
If you are a spiritually abusive husband, and a control freak, and weak in taking personal responsibility....than this book is definitely not for you. Because you will want to just keep blaming your wife, and this book will not let you do that. Man up or get out of the marriage.
Read more
2 people found this helpful
Helpful
Comment Report abuse

Tina L. Moore
5.0 out of 5 stars Finally-somebody who gets it!
Reviewed in the United States on January 23, 2015
Verified Purchase
After almost 15 years of a high turmoil marriage, we found a therapist (last ditch effort) that recommended this book. My husband is not a reader, but started the book and eventually, I would read him parts that I found important. I'm not gonna lie- he found it extremely difficult to listen to anything he had done wrong, but eventually, he had some "Aha!" moments. He also seemed to connect to it because it was written by a man. There were times when I'd say, "Robert nailed it. That's exactly what I've been trying to tell you for years." And there were times when my husband would chuckle and say," Yes, that's how men think." But here's the thing...the book got him TO STOP AND THINK! -which is good enough for me! He even sincerely apologized for being an @$$*©#! for all those years. He's a work in progress...our marriage is a work in progress. But at least he's working on it and that's reason enough to buy this book!
Read more
6 people found this helpful
Helpful
Comment Report abuse

Miss. Reese
2.0 out of 5 stars Help
Reviewed in the United States on March 26, 2020
Verified Purchase
I can not get into the book. It will not allow me to log on...Help
Read more
Helpful
Comment Report abuse

Terri Payne
5.0 out of 5 stars Five Stars
Reviewed in the United States on February 18, 2016
Verified Purchase
Great - should be a prerequisite for getting married!
Read more
3 people found this helpful
Helpful
Comment Report abuse

M. McCann
5.0 out of 5 stars Oh thank God!
Reviewed in the United States on February 3, 2010
Verified Purchase
Robert Alter explains to men exactly what I (and so many of my female friends) have been trying to express to each other and our therapists but haven't known how or been able to explain to the men we adore and who don't seem to know we exist half the time.

I told my husband I wanted him to read the book, and because it CAN be offputting to men, I included as a bookmark a love letter telling him how much I love him and want him to be happy. I also added post-it notes throughout the book telling him where he does a great job in our relationship and where we need improvement, and I threw in a lot of "I love you" post-its just to remind him that this is not about him being BAD or WRONG. In a lot of ways it is about me being so focused on making him happy that it never occurred to me to demand that he be as committed to my happiness and comfort as I was to his.

I think that is what Alter means when he says, "It's (mostly) his fault." Women tend in general to be good at relationships, at communicating, at being aware of other people's needs and feelings and at giving their loved ones what they need. We read books about relationships and try to change ourselves to be better wives and lovers. In general. Whereas men, in general, tend to feel that they are entitled to whatever comfort or luxury they want at any given moment. My husband, and I love him to bits and think he's wonderful, is happy as long as I am always available to him when he wants me and the rest of the time, he shows no sign of being aware that I am in the same room with him.

It's true, as one reviewer remarked, that there are women out there--and I have met and loathed a number of them--who act like the worst male examples in Alter's book and then some. I did see some suggestions in the book that might help my male friends who are involved with the women in question--even if it is only helping them to see when they need to leave the relationship. And what the heck. They're great guys. They're going to find themselves in another relationship. All the better to have some idea of what a sane, sensible woman wants and expects.

As a women who loves men for all their sweaty, hairy, goofy, sometimes boorish and obtuse behavior as well as their strength and warmth and genius, I would highly recommend this book for all those guys who are scratching their heads and wondering "What the heck is she on about NOW?" Read the book. THen ask her to read the book and tell you what she thinks you do well and what she would like you to do more or better. Then DO what she says she wants you to do for her. I think your relationship will probably improve at least 500%.
Read more
16 people found this helpful
Helpful
Comment Report abuse
See all reviews

Kindle Customer
5.0 out of 5 stars The best book on relationships I have ever read
Reviewed in the United Kingdom on January 7, 2016
Verified Purchase
I have been married for eight years now. This means that I wish I had found this book at least eight years ago. Oh why, oh why didn't I find it much sooner? But at least I've found it now! Because the truth is, this is the finest book on relationships I have ever read, and I can unwittingly recommend it. Apart from being packed from start to finish with solid, useful and thoroughly useable advice,this book also inspires you to take that advice and follow it. A bonus is that this book is inexpensively priced and a thoroughly enjoyable read - I kept checking to see how much of the book was left and being happy to find that there was lots of it. Thank you, Robert Alter, this is a fantastic book. As something of a collector of self-help books I can pay this one the compliment of saying that I'd put it right at the top of my (sadly short) list of self help books which have actually made a real difference in my life.
Read more
Report abuse

ROB STEPHENSON
5.0 out of 5 stars Excellent Book
Reviewed in Canada on August 6, 2020
Verified Purchase
Very well written, informative, made me laugh, made me cry, easy to read and understand. One of those books you can't put down, worldly and wonderful, full of great tips and good advice, would highly recommend.
Read more
Report abuse

TheCannaCanuck
5.0 out of 5 stars Five Stars
Reviewed in Canada on April 18, 2018
Verified Purchase
You need this book. I wouldn't still be married without it.
Read more
Report abuse

Shefali
5.0 out of 5 stars Phenomenal!A must read!
Reviewed in India on June 12, 2015
Verified Purchase
Speechless! The book is simply amazing . A relationship saver . Best book ever read till date . A must Read .
Read more
Report abuse
See all reviews