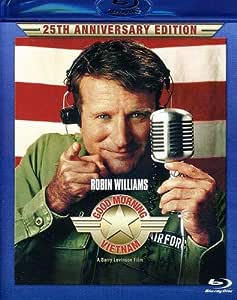 4.8 out of 5 stars
4.8 out of 5
4,450 global ratings
How are ratings calculated?
To calculate the overall star rating and percentage breakdown by star, we don’t use a simple average. Instead, our system considers things like how recent a review is and if the reviewer bought the item on Amazon. It also analyzes reviews to verify trustworthiness.

Amazon Customer
5.0 out of 5 stars Great movie with many twists and turns
Reviewed in the United States on November 18, 2017
Verified Purchase
Great movie with many twists and turns, one of William's best, movie shows chaos of guerrilla warfare with a very humorous dj, Adrian Cronower. In 1965 there may have been the censorship on rock and rock but by 68 we became the first rock n roll Army, and listened to US Armed Forces network which was certainly censoring mthe news and drug and psychadelic music, but allowed a lot of it too because the authorities knew we wouldn't listen to the radio if they censored everything. There was an underground of censored music like Ravi Shankar, Vanilla Fudge, by Dylan, Hendrix, The Beatles, Country Joe and the fish, etc., and after work we'd roll up a fat one and dig the Doors 'Break it on throuh to the Other Side'. There's only one thing missing and that's a lot of red sand; everything is too clean, and really everything was covered with a sheen of red dust. I love this movie and again compliment Williams and the great cast for such an outstanding story, funnier than hell, usually. War actually does have a huorus side to it at times.
Read more
12 people found this helpful
Helpful
Comment Report abuse

joel wing
TOP 100 REVIEWER
4.0 out of 5 stars Williams got to be Williams in this role that also gave a slice of the Vietnam War
Reviewed in the United States on September 15, 2020
Verified Purchase
Good Morning Vietnam was one of Robin Williams’ outstanding roles. He played radio DJ Adrian Cronauer (Robin Williams) who broadcast over the armed forces radio out of Saigon during the Vietnam War. The story is about how he shook up the station with his personality which he hoped would help out the troops while they fought. In the process he got into nothing but trouble with his superiors. This was the perfect part for Williams because he basically got to play himself.

Everything Williams was known for was what he got to do with Cronauer. He was fast talking, doing different voices, and making non-stop jokes. Williams got to show all the manic parts of his personality. It’s a blast.

Of course trying to be an individual in the military is not encouraged so his antics got him into trouble with the radio station. They didn’t like the fact that he played Rock and Soul music. They didn’t like his jokes. The tipping point was when he read an unedited news story about a bombing that he experienced in Saigon. Cronauer’s conflict was a like a metaphor for the Vietnam War. The soldiers knew what was going on but they weren’t getting the truth from the military.

Overall the movie is a lot of fun and was a great vehicle for Williams’ talent.

Robert Hayes
4.0 out of 5 stars A role tailor-made for Robin Williams, and a decent war movie to boot
Reviewed in the United States on September 9, 2014
Verified Purchase
THE FILM: GOOD MORNING, VIETNAM is one of Robin Williams' best movies and was one of the first to really showcase his improvisational abilities. However, it's not just a comedy and in fact, the tone of the picture is more serious than you might think going in. While Robin Williams does get to let loose in several hilarious scenes as Air Force DJ Adrian Cronauer, there is an undercurrent of seriousness which seeks to examine the effect of the Vietnam War on Vietnamese citizens, as well as what the US troops endured. It's not particularly graphic, but it didn't really need to be. Up to the time this film was released there were several highly acclaimed films on the subject already. What sets this one apart is the character of Adrian Cronauer, who uses comedy to lighten the spirits of the men serving their country overseas. Still, the film isn't without its flaws. There is a romantic subplot that seemed shoehorned in just to give the film some extra conflict. Also, by virtue of coming later, none of the messages the film tries to get across were that original either. Still, it's worth seeing this movie for Robin Williams' performance alone. Forrest Whitaker also gives a good supporting turn as Cronauer's Army buddy/escort. Another outstanding part of this film was the soundtrack, full of great 1960's tunes. There is also a moving sequence set to Louis Armstong's "What a Wonderful World." On historical accuracy, apparently not all of the events in the film happened as described and some were surely invented for dramatic purposes. However, that doesn't really hurt the film too much. Is this Robin Williams' absolute best film? No, but considering what came immediately before, this collaboration with Barry Levinson (who he would team up with a couple more times in his career) was a step in the right direction. Just kick back, relax and take in the comic genius that was Robin Williams.

THE DISC: For this 25th Anniversary Edition, Touchstone delivered a nice package. The picture and audio quality is perfect (or at least as perfect as the format allows) and there is a decent amount of special features. The biggest extra is a 34-35 minute series of production diaries which features members of the cast and crew, and Adrian Cronauer, reminiscing on the film. There is also some raw footage of Robin Williams improvising in the DJ scenes that didn't make it into the final cut, and two theatrical trailers.

OVERALL: This is an outstanding film, which works on multiple levels and the Blu-ray presentation is also excellent. This seems to be the definitive release, and I highly recommend buying it.
Read more
12 people found this helpful
Helpful
Comment Report abuse
See all reviews

R B Harris
5.0 out of 5 stars Classic Williams in a classic film.
Reviewed in the United Kingdom on April 4, 2015
Verified Purchase
When you watch this movie you begin to realise the extent of RW's talents. His comedic energy and timing is remarkable, and more so because his ability to draw you into his character with that skill is something that so many actors don't have. He will make you laugh and cry, within one short rollercoaster ride, in one scene. That mesmerising talent clearly came at a price. He was nominated for the Oscar for his portrayal of Adrian Cronhaur and like us doubtless many feel he should have won. He had drawn on experience of entertaining servicemen something he did repeatedly throughout his career when there were wars and places he had been told not to risk going to. A testament to his soul. A film which was probably met with resistance by the great American powers that be, Good Morning Vietnam will forever be a true classic, and a terrific reminder of war, what goes on behind it, and the efforts of those who want to make a difference.
Read more
12 people found this helpful
Report abuse

Bookworm
4.0 out of 5 stars Showcase for William's unique improvisation skills
Reviewed in the United Kingdom on September 21, 2014
Verified Purchase
This is the story of armed forces radio DJ Adrian Cronauer (played by Williams) who is sent to Saigon in 1965 during the Vietnam war to re-vitalize a forces radio service that's broadcast style is desperately stuck in the past. It is loosely based on a real story of the impact Cronauer has on the radio station, its management and the troops.

The film takes its name from Cronauer's euphoric, over -the-top welcome call to his radio slot and is really a vehicle for William's unique ability to improvise with surreal monologues and dialogues delivered at breakneck speed by his character on air. There are some poignant moments (eg the bombing of a bar used by forces personnel or several of Cronauer's interactions with a native Vietnamese brother and sister) but these are relatively isolated and only hint at a pathos William's would go on to convey more convincingly in his later film roles. This aside, the acting, script and story are lightweight.

William's plays himself largely so any fan of his will love this film. The film could be retitled "Mork goes to Vietnam "(Mork from the TV series Mork and Mindy featuring Williams first major role). Some of his improvisations work and some don't but they are always engaging. Unfortunately, after (what becomes a catchphrase) "Good Mornng Vietnam", the most memorable line is also delivered by Williams in the first seconds of Cronauer's debut broadcast:

malcolm taylor
5.0 out of 5 stars Brilliant treatment of a most difficult subject
Reviewed in the United Kingdom on February 7, 2014
Verified Purchase
This film is a wonderful example of how to deal with a factual and depressing subject and make it totally watchable. Sure, the violence is covered, quite rightly, but it is cleverly interspersed with Robin Williams' quite brilliant repartie as the maverick DJ brought in to lift the troops' flagging morale. His character change once the violence touches him personally is wonderful to behold. The film never forgets the importance and seriousness of its topic, but there are moments of light relief. Personally I feel this is where it scores over the unending depression of films like Apocalypse Now and The Deer Hunter. In short a wonderful film, beautifully acted and brilliantly paced.
Read more
13 people found this helpful
Report abuse

Christine
5.0 out of 5 stars Words have power
Reviewed in the United Kingdom on May 1, 2019
Verified Purchase
Swim against the current and express your best abilities at the same time. Robin Williams is best in using his talent for words and fast speech and expresses this ability in an unconventional environment between admirers and opponents.
Read more
One person found this helpful
Report abuse
See all reviews