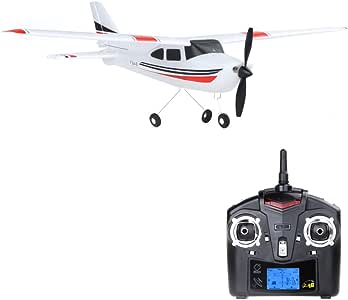 3.7 out of 5 stars
3.7 out of 5
237 global ratings
How are ratings calculated?
To calculate the overall star rating and percentage breakdown by star, we don’t use a simple average. Instead, our system considers things like how recent a review is and if the reviewer bought the item on Amazon. It also analyzes reviews to verify trustworthiness.

nicely from the start, after a last quick control check (verify the elevator/ rudder directions are correct when you push left/ right..up/down on the sticks) it was ready for a hand launch. Full throttle, a hard throw and it was up and climbing. 1/2 throttle about 50 feet, so I could slow it down and trim it a bit.Pretty good- just needed a couple clicks of left rudder and up elevator, then it was flying pretty much hands off. Climbed (slowly- it's a trainer after all) to 100' nosed down to build some speed, and attempted a loop. Not enough inertia, it just stalled and spun left, but recovered nicely. Next was a snap roll- no dice, not enough power.

slow fly bys at 1/4 power were fun..this thing slows to a fast jog.After a touch and go, landed plane power off, needed full back elevator in the landing flare. Next landing..carried a bit of power through the flare. It started to rain, but I got over 8 minutes in the air, and no signs of battery slowing down!
I am thrilled to have found this plane to get my feet wet again, and looking forward to building something cool to fly this winter. I Can't recommend this thing enough!!
PROS- Great value for the price-costs less than just a gas engine for a larger trainer plane. Very nice quality radio with some impressive digital read out features. Extra battery, long flight time. Integrated servos, receiver, and speed control on one IC board= no fuss set up. Everything is done for you!

CON- poor instruction manual- company should have attempted to find a fluent English speaker to write it better.
Landing gear is flimsy- not really a bad design, it just has to be made light. It did not track very straight. IMO- just don't use it if you don't want to, you don't really need it. Just hand launch.

UPDATE- 10/02/17 I have logged 33 flights on this plane, and it is still working great.The batteries are still giving me 20 minutes or more flight time. I found this thing will actually fly inverted! I have crashed 3 times, including into lake Michigan..and it keeps going! This thing is virtually indestructible! I have gone on to larger, more complex electric planes, yet I still keep this one in the car for a flight anywhere. It's fun flying with the birds, they get curious and check it out. Almost lost it once in an intense thermal over a tennis court on a hot day..it just kept climbing with the power at idle. I can fly until it is almost out of sight, and get glide times of over 1.5 minutes.

Jolly Roger
5.0 out of 5 stars Great plane, here are Pros and Cons
Reviewed in the United States on December 10, 2017
Verified Purchase
This is the best choice for beginners, in my opinion. It has a lot of perks that make it super easy to fly.

PROS:
Batteries last around 25-30 minutes, and they give you two!
The controller is extremely nice
It's in mode two, which means the throttle is on the left stick of the controller and control surfaces are on the right
The box doubles as a nice carrying case
It doesn't need a lot of space to fly
They give you a magnetized screwdriver
You get three extra props

CONS:
It can't handle much wind without becoming extremely unstable
The landing gear is trash and requires fifteen feet to take off
The one piece they don't give you an extra for is the tiny screw that holds on the wind, so be careful with it

TIPS:
For more stable landings, I cut a small crevasse in the rear and stuck the nose gear in it. Then I moved the rear gear to the front. Bam! Now I had nice landing gear that only requires five feet of runway.
CHECK THE PROPELLER BEFORE EVERY TAKEOFF. There have been occurrences where the engine was loose in its mount. I gently tugged mine out and applied glue around the engine, stuck it back in, and let it dry.
It doesn't have ailerons but flies like it does.
Read more
16 people found this helpful
Helpful
Comment Report abuse

Amazon Customer
5.0 out of 5 stars Awesome plane!
Reviewed in the United States on July 8, 2016
Verified Purchase
Awesome plane!!! Longest flight times I've seen in almost any r/c plane I've ever own. I make the guys at the flying field jealous of how long it's in the air. Lol. I've purchased five 3.7 volt 750 mah batteries from Amazon and a three blade prop, (original prop is HARD to get off motor shaft.. But lil time and patients.. works wonders.. Lol.) and have easily flown 20-25 minutes with no problem. Awesome. Great plane for the price!!!
Read more

MRvinylGUY
5.0 out of 5 stars Amazing value!!!
Reviewed in the United States on May 28, 2018
Verified Purchase
Not sure how to beat the price/value here. If you want to learn on a little pale before stepping up to a big one that you don't ever wanna crash, this is perfect. Granted, you're not going to be acrobatic/3D... but, you're getting a remote, plane, battery charger... the works, amazing. My kid crashed one, we both flew it and when we trashed it too much we bought one more. Had to fly on a no-wind day, but had hours of fun... great learning enjoyment.
Read more
7 people found this helpful
Helpful
Comment Report abuse

Jonathan Walker
1.0 out of 5 stars Arrived Missing Parts
Reviewed in the United States on December 25, 2017
Verified Purchase
Ordered this for my daughter for Christmas. Opened it On Christmas morning only to find that the li-polymer battery is missing from the packaging. Now have an incredibly disappointed kid on my hands.
Read more

curtis Gray
3.0 out of 5 stars Three Stars
Reviewed in Canada on December 5, 2017
Verified Purchase
I don't like the landing gear other than that it's more fun then a barrel of Monkeys
Read more
Report abuse
See all reviews