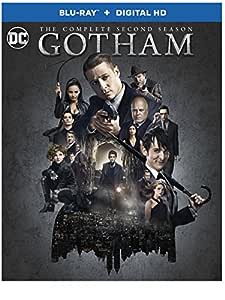 Ben McKenzie (Actor), Donal Logue (Actor) Rated:
NR
Format: Blu-ray
4.7 out of 5 stars 1,542 ratings
Available at a lower price from other sellers that may not offer free Prime shipping.

The darkness grows on GOTHAM, as super villains more ambitious and depraved are introduced, and a realignment of alliances shakes up the fight for power in Gotham City. With Detectives Jim Gordon and Harvey Bullock at the forefront of the fight against crime in this dangerously corrupt city, Season Two witnesses Gordon’s moral compass wavering, as he confronts Gotham’s most notorious criminals. At the same time, he continues his quest to gain the trust of the young Bruce Wayne, who is now on a clear path towards the man he is destined to become, after discovering his father’s deepest secrets. In the epic turf war that occurred at the conclusion of season one, The Penguin battled his way into power over Gotham’s underworld. In Season Two, GOTHAM follows the evolving stories of Edward Nygma/The Riddler, and Selina Kyle/the future Catwoman as well as the origins of new villains, including The Joker and Mr. Freeze.

4.7 out of 5 stars
4.7 out of 5
1,542 global ratings
How are ratings calculated?
To calculate the overall star rating and percentage breakdown by star, we don’t use a simple average. Instead, our system considers things like how recent a review is and if the reviewer bought the item on Amazon. It also analyzes reviews to verify trustworthiness.

Mike Billington author of Murder in the Rainy SeasonTop Contributor: Star Trek
VINE VOICE
5.0 out of 5 stars New villains and an improved storyline equal a 5-star season
Reviewed in the United States on October 20, 2016
Verified Purchase
In a season full of surprises, Detective Jim Gordon continues fighting the corruption that is part and parcel of life in Gotham but it's not long before he finds himself neck deep in trouble.
He has to make some morally questionable decisions, his captain is killed, the bad guys have their hooks in almost every facet of government, and their influence is so great that Gordon winds up as little more than a security guard at the Arkham Asylum. It gets worse: He later winds up in jail, his girlfriend tells him she is pregnant, and his partner quits the police force to work as a bartender.
This is not a season without hope, however. It arrives in the form of a new captain: Nathaniel Barnes (played with perfection by Michael Chiklis) is a straight arrow who cannot be corrupted and he is just as determined as Gordon to clean up the streets.
This season marks a departure from the first in that it has a lengthy storyline involving billionaire Theo Galavan, who appears (on the surface) to be someone that can save the city because he is too rich to be bribed and is too powerful to bow to pressure. Played nicely by James Frain (who "Orphan Black" fans will recognize as the evil Ferdinand Chevalier), Galavan is not the savior he appears to be, however, but a man with his own twisted agenda.
The tone of "Gotham" remains dark and moody: It seems as though there is never a sunny day in the city. In my opinion that's necessary to help tell the story although I recognize that many people will find it depressing. The acting is sometimes over the top but this is a series about comic book heroes and villains so I'm prepared to forgive that fact.
The final verdict: I like the Galavan storyline and some of the new villains and I like the situations that the writers have thrust Gordon into so I give this season 5 stars with one proviso - at some point, things have to start going right for Gordon and his allies.
Read more
3 people found this helpful
Helpful
Comment Report abuse

Cape Girl
5.0 out of 5 stars A good growing hero story
Reviewed in the United States on January 4, 2017
Verified Purchase
Very well written--both in character development, dialogue, and plot. Love the clever use of music or dark humor (think INTJ humor and you've got it) to lighten the horror of villains or the grimness of the brutal life that is Gotham. I like how we can see Bruce becoming what will one day be Batman a piece at a time--sometimes it is through what he experiences himself, sometimes it is through the effects of others on his world. (IE: His fascination with watching Azrael move cloaked through the shadows above and seeing the fear it invokes in the watchers below, will help him choose his future costuming. Alfred's realization that he will lose Bruce either to death or someone else if he doesn't start teaching him to fight, begins Bruce's training in earnest. Etc.) There are a lot of nods to the comic series, so if you know the Batman stuff, this series just really deepens out nicely. Sure, this is a violent series--that should be expected as this is about Gotham not Metropolis, the darkness that creates the future Dark Knight. But it is handled in a comic book way--almost villainously picturesque, not straight up Walking Dead style, if that makes sense. And I really love how all the moral or philosophical questions of the Batman series is present here--which really adds to the feeling of a growing hero story. Sure, there is some cheese, it is tv, but it is fun anyway.
Read more
2 people found this helpful
Helpful
Comment Report abuse

Timothy
5.0 out of 5 stars dark, scary, and still fun
Reviewed in the United States on March 29, 2019
Verified Purchase
I got hooked on 'Gotham' from the start, and am super happy that the studio has been putting out nicely packaged Blu-Ray collections so I can revisit the show anytime I get the urge to do so. While the overall tone and feel of the show is undeniably dark and creepy, a ray of hope shines through, along with an element of fun - which is kinda the point of comics, isn't it? Every season is worth watching. Great show!
Read more
2 people found this helpful
Helpful
Comment Report abuse

FredrickDr.ead
5.0 out of 5 stars This show is so great and I would recommend it to anyone
Reviewed in the United States on June 11, 2016
Verified Purchase
I bought this digital copy since I didnt want to wait for a physical copy to come out in August. This show is so great and I would recommend it to anyone. Season one starts out strong with Gordon have to kill Penguin a member in the gang which he refuses to do. Things just keep getting fast paced after that. It seems most of the show revolves around the Trio of Penguin, Ed, and Jim Gordon. Which are the three most important characters that seem to be driving this plot along. I do hope hey introduce some more of the main bad guys soon to balance it out but there wouldnt be any show without Ed, Penguin, and Gordon. I hope Penguin and Ed make a team up at some point in the future. Cant wait for season 3 to come out. I LOVE THIS SHOW! While it does seem to change some things which wont follow the comic book storyline, this story does a good enough job to stand on its own.
Read more
One person found this helpful
Helpful
Comment Report abuse

chrispy
5.0 out of 5 stars Batman Begins
Reviewed in the United States on November 25, 2015
Verified Purchase
Anyone who likes batman comics, movies or 1960's TV show will love Gotham. I was hesitant about what they could do with a "prequel" but so far through season 2 they really have delivered. The same nutty villains, cops, and city officials are all on display. And it's fun to imagine how many of them got their start. Even though Bruce Wayne (he's not yet batman or even knows what that means) is not the main character, he is only a preteen, he does know he's destined to do something to save the city. The main character in this series is Jim Gordon, the eventual "good guy" head of the Gotham police department, who plays the hero trying to tread water waiting for a miracle to happen to help him save the city he loves.
Read more
Helpful
Comment Report abuse

Richard
5.0 out of 5 stars I love this show
Reviewed in the United States on May 24, 2017
Verified Purchase
I love this show, and I'm not a huge Batman fan at all. And that's probably why I like it, because this is mostly about the other characters. Love the Penguin and Riddler.Great actors in this. They really casted this show well. Gordon's partner (I think his name is Harvey) is great also, makes me laugh with his quips. And the back story of Bruce is interesting as well. Probably the best Alfred of anything Batman I've ever seen. Nice blend of noir, action, comedy.
Read more
One person found this helpful
Helpful
Comment Report abuse
See all reviews

Page 1 of 1 Start overPage 1 of 1
This shopping feature will continue to load items when the Enter key is pressed. In order to navigate out of this carousel please use your heading shortcut key to navigate to the next or previous heading.
Back
Next
Pages with related products. See and discover other items: Explore crossovers for sounds