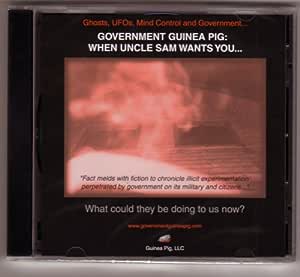 Recommended by NEXUS and Mysterious Universe magazines as a "must see" especially for conspiracy theorists. What began as a paranormal investigation of The Black Forest Haunting uncovered something more interesting. Using one family's true life experiences, Govt Guinea Pig discloses the technology to create bizarre events experienced by one family as featured on the TV series "Sightings," among others.

Government Guinea Pig details how mind control methodology is used to affect unsuspecting victims. Discloses various methods of mind control, and melds fact and fiction to chronicle illicit experimentation perpetrated by the U.S. government on its military & citizens and discloses how some methods work. Citing one family's true life experiences, GGP discloses technology that can create/duplicate bizarre events like those experienced by the “Black Forest Haunting” family featured on the TV series “Sightings,” and “Mysterious Universe,” among others. The video details how mind control methodology and non-lethal weapons testing can be used on unsuspecting participants in everyday "safe" situations, from social gatherings and private homes, to church services.

Bottomline for the viewer... Beware, this could be happening to you ! One viewer commented, “I had a difficult time sleeping for several nights after seeing Government Guinea Pig. I used to think only raving lunatics bought into this stuff. Now, I catch myself looking in the rear view mirror and wondering who’s back there.” The movie opens “On September 28, 1994, a Congressional subcommittee disclosed that beginning in 1940, up to half a million U.S. citizens were used as human guinea pigs in covert experiments involving radiation as well as biological and chemical agents,” then asks...

“What could they be doing to us now?” and goes on to document how atrocities perpetrated in the past may have evolved to the present then demonstrates the possibilities.