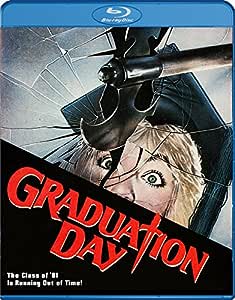 Share
STREAM ANYTIME with Prime Video from $19.99
Have one to sell?
Sell on Amazon

After the death of a high school track star during a race, a mysterious, fencing-mask wearing killer begins murdering her friends and teachers. Who could the killer be? Her disgruntled coach? Her angry sister? Her violent boyfriend? As the bodies pile up, a twisted mystery unfolds, slowly revealing itself as it moves towards its bloody climax. One of the quintessential high school set slasher films of the early 80s, Vinegar Syndrome is bringing GRADUATION DAY to Blu-ray, newly restored in 4K and presented in its original aspect ratio for the very first time!

3.9 out of 5 stars
3.9 out of 5
155 global ratings
How are ratings calculated?
To calculate the overall star rating and percentage breakdown by star, we don’t use a simple average. Instead, our system considers things like how recent a review is and if the reviewer bought the item on Amazon. It also analyzes reviews to verify trustworthiness.
Top reviews

Deborah Eden Perfidio
4.0 out of 5 stars I had forgotten aslasherbout this one completely......
Reviewed in the United States on March 31, 2017
Verified Purchase
I am an 80s child in 1980 I was 10 and so my early teen years were filled with these delightful slashers. When I was younger I was much harder on these movies and I think that's why I don't remember Graduation Day as well as other standards from back then. (Halloween, Friday the 13th, Mothers Day, I Spit on your Grave etc) regardless as I got older I found myself more tolerant of the cheesier ones so GD came into view under my Shudder subscription and I find myself pleasantly surprised by this and House on Sorority Row ... I had forgotten about both of them but having just watched them I have to say Hooray for cheese! This was an absolute delight; the killings might be slightly subpar but who cares? It brings back memories of me and my bff lisa running to the video store every Friday night to try and get our hands on the latest release before the grimey guys from the porn section would pretend they were really there for cheesy horror and swipe all the good vhs tapes before we got to them! Like an addict whose thrill of getting high is half about the chase itself I miss how we had to get the tapes almost as much as actually watching them ( the video guys always gave us hard times about all the R rated movies as we were all of 12 at the time) ok enough of my skip down memory lane ! This is actually a half decent teen slasher .. get the popcorn and your best friend and put your brain to the side...it's Friday night 1982 and the first kill is about to go down..........
Read more
12 people found this helpful
Helpful
Comment Report abuse

O. B. Tryggvason
3.0 out of 5 stars Passable slasher. Good Blu-ray edition.
Reviewed in the United States on January 9, 2016
Verified Purchase
I'm one of those slasher film enthusiasts that just has to have a decent collection of good editions of these films. "Graduation Day" was one of the few that slipped past my radar so I, in the end, blind bought it based on numerous positive reviews which also made a point of how good it looked and sounded.

It's not all bad but this is one slasher that is in the bottom tier. There's no suspense and the build ups to a kill are awkwardly staged and the red stuff is, unwisely, sparingly used. The quite laughable red herrings are so obvious that they basically provide the film's real laughs and comical scenes fall a bit flat.

This is, however, one of those slashers that has a sympathetic villain that has a reason, albeit a deranged one, for his killing spree spurred on by loss and tragedy. Not wanting to have just a faceless enemy systematically hacking his way through just anyone; there's a method this person's madness (and a very clunky use of a stopwatch! - but it has it's purpose). In the end it's all pretty sad; but seasoned viewers will most likely have guessed who long before.

There are a few inspirational touches here and there; a beheading that comes out of the blue, Linnea Quigly does what she usually does in a horror pic and a minor shock moment that's well played out in the end.

Performances are pretty lacklustre but Christopher George is always likable, even when playing a not so likable character. Overall; "Graduation Day" will only appeal to slasher film fans but this fan was a little underwhelmed.

The Blu-ray is good; a/v quality is good (no subtitles though) and the extras are informative. Brings it up a star.

The Deuce
5.0 out of 5 stars Christopher George keeps us running (to put his movies in our shopping carts)
Reviewed in the United States on October 4, 2017
Verified Purchase
Not being much of a fan of the slasher genre in general, I was delighted to find that this particular example had an underlying humor (without being an actual comedy) as well as a plot that kept the entertainment level delivering a viewable quality.

Christopher George would have made a good President of the USA; he had that presence to him, and though he more than likely didn't have the credentials to run the country (debatable, I know), he did make movies a more watchable commodity when he appeared onscreen.

So see this one if you can, I did and don't regret it. It kept me smiling throughout, and that's not easy to do in this day and age. I'm glad that Amazon is making these films available on their site as it gives us choice and that is important to me in this sweeping landscape of media delirium.
Read more
Helpful
Comment Report abuse

Fi
4.0 out of 5 stars Don’t watch if you can’t do flashing lights!
Reviewed in the United States on December 31, 2019
Verified Purchase
This movie had everything it needed to be a five star wonderful slasher from the 80’s except for the editing and odd stock footage feel of said editing.

Some of the deaths make you physically cringe! So give it a chance if you like a good old 80’s slasher.
Read more
Helpful
Comment Report abuse

Gregorypwilson
3.0 out of 5 stars "Not A Bad Slasher Flick!"
Reviewed in the United States on June 26, 2016
Verified Purchase
This 1981 horror film features a killer targeting a high school track team.
This isn't a bad slasher flick following in the footsteps of "Prom Night"
and "Friday the 13th" with a decent cast, chilling score and gruesome
deaths. This set features good picture most of the time, but grain and
dirt are still present, audio is clear and extras include short interviews,
commentary and theatrical trailer. Fans of the genre may want to add
this to their collection.
Read more
2 people found this helpful
Helpful
Comment Report abuse

Francis Booth Lynch
1.0 out of 5 stars This movie didn't pass the final
Reviewed in the United States on June 11, 2020
Verified Purchase
1981 bonus movie 4 in my journey through films of my lifetime.

I try to watch at least one movie from each year that is so bad it must be seen. Unfortunately "Graduation Day" is just plainly bad. There were some interesting moments but few. The effort to mislead the audience as to the identity of the killer was laughable and insulting. Pathetic movie.
Read more
Helpful
Comment Report abuse
See all reviews

Benminx
3.0 out of 5 stars A decent, if patchily paced, slasher
Reviewed in the United Kingdom on September 20, 2016
Verified Purchase
Graduation Day marks a middle ground in slasher movies. It's unusually well acted by many of the stars, and with more than usual thought given to showing quirky surrounding characters who don't always have a direct influence on the plot. At the same time the plot can feel like it's dragging, with little happening for long stretches. When they come, the kills are usually a little gory, but most aren't very inventive (people tend to just get stuck with a blade of some kind). It's also a surprisingly long time before any panic breaks out.
However, to its credit the editing and direction milk maximum tension from the scenes where something does happen, and the film looks pretty good on Blu-Ray (my first encounter with the movie). It borrows liberally from other slasher and horror films in places, and won't trouble your adrenaline glands too much, but it's been made with quality and care, and you could do a lot worse than give it a chance.
Read more
2 people found this helpful
Report abuse

Brandy
4.0 out of 5 stars Revenge it is then.
Reviewed in the United Kingdom on August 24, 2012
Verified Purchase
This film is like many other high school horror flicks..I am not gonna give the plot away. The acting is good and the vid is full of nice looking people..If you like this sort of film, then well worth a watch seeing the body count rise.Personally, i thought it was a very good film.
Read more
Report abuse

RoSchro
3.0 out of 5 stars Blah. Not quite as good as remembered.
Reviewed in the United Kingdom on February 19, 2017
Verified Purchase
Meh. I seem to have better memories of the 80's slashers. I even might have ordered this because of the extra Scream Queens feature, knowing what I was getting into.
Read more
Report abuse

Simon
5.0 out of 5 stars Slasher classic
Reviewed in the United Kingdom on January 1, 2016
Verified Purchase
A great slasher classic in great quality, thought the documentary was a bit dull
Read more
Report abuse
See all reviews