You've subscribed to Arkana Archaeology Thrillers! We will preorder your items within 24 hours of when they become available. When new books are released, we'll charge your default payment method for the lowest price available during the pre-order period.
Update your device or payment method, cancel individual pre-orders or your subscription at
Your Memberships & Subscriptions
There was an error. We were unable to process your subscription due to an error. Please refresh and try again. 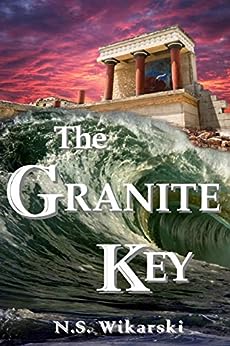 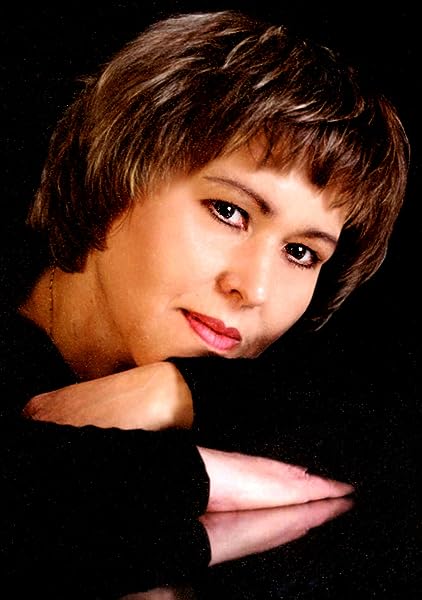 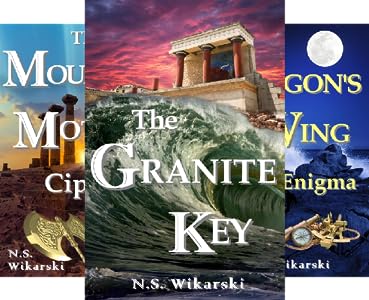 Series Finale Nominated as Best Mystery of the Month
Think 'MEDIUM meets THE LOST SYMBOL' and it only begins to describe the pleasures of THE GRANITE KEY - 5 Stars. (Kindle Nation Daily)

What impressed me the most about The Granite Key was the large amount of archaeological and historical detail that crept its way into this novel. It reads very much like an updated version of a Dan Brown book, matching fact with fiction until the reader is unsure of which is which... I love thrillers linking the past to present and books that teach me something. Here I learned a great deal about ancient matriarchal societies. It was a very intriguing, suspenseful and enjoyable read. (I Heart Reading)

An outstanding, well-crafted, highly suspenseful novel by author Nancy Wikarski... One girl's dream, one girl's vision many lives will never be the same. Read this FIVE GOLD KEY NOVEL to find out more. (Angie's Diary)

I found this book to be interesting and thought-provoking... I expected it to challenge my belief system.  And it did...This is definitely an empowering read for women, which defies everything we have previously been taught about a world dominated by men... I like a book that can make me stop and think. I do believe that a theory like this could indeed cause a reaction from those who may want this bit of history to be forgotten--forever. (Art From The Heart)

Suspense, history, mythology and mystery all mixed in one -that's my kind of read... I loved all the scenes in the ancient tombs, and with The Arkana. Cassie made an interesting main character but the story doesn't rise or fall with or without her. It's about much more than her. In the fashion of books like "The Da Vinci Code" and "Labyrinth", The Granite Key definitely deserves to be on your reading list. (I'm An Eclectic Reader)

I loved The Granite Key. It was a great book... I especially loved how the main character had the ability to touch objects and then find out their origins. I hadn't read about this before, and it was very original... The pacing was fast, and I couldn't stop reading once I got started. (365 Days Of Reading)

The setting was great. There wasn't a lot of time wasted on endless descriptions, but instead we got an action-packed story fueled with history, mysteries and ancient secrets. I'm a huge fan of history novels, history books, and the History Channel, so I really "dug" the quest for the truth buried in the past. (Bookish Madness)

4.1 out of 5 stars
4.1 out of 5
348 global ratings
How are ratings calculated?
To calculate the overall star rating and percentage breakdown by star, we don’t use a simple average. Instead, our system considers things like how recent a review is and if the reviewer bought the item on Amazon. It also analyzes reviews to verify trustworthiness.
Top reviews

Kindle Customer
3.0 out of 5 stars Pass unless you want to keep buying books!
Reviewed in the United States on July 19, 2017
Verified Purchase
Interesting, maybe a bit too much detail. Irritating as there is no end to this book...it just stops. I would have preferred at least 1 artifact be found before being forced to buy another book as this is, to me, another blatant shove to purchase several books to get the entire solution. This makes me think we have an author, who although obviously knows her subject, is not too sure of the presentation. Not enough action, too many dull spots to keep my interest, and, of course, the annoying references to "the girl."
Read more
74 people found this helpful
Helpful
Report abuse

Michael D. SweeneyTop Contributor: Violins
2.0 out of 5 stars The book starts too early, the story, too late
Reviewed in the United States on September 10, 2017
Verified Purchase
The Crete section is wonderful. The place is described with clear and vivid detail, the exploration is involving, the archaeological revelations are fascinating and well-integrated into the story. Extra points in the way the climax is utterly dependent on the setting and the specifics of the archaeology. And the way the internal (historical) conflict is externalized in the personalities and the ensuing confrontation. Even a little birth symbolism there?

The trouble is, that takes place in the last quarter of the book. The first 75% is almost entirely lecture. Idiot lecture of the worst kind. The big secret being revealed is a rewriting of history, fine. Problem is, the everyman POV character, Cassie, is completely ignorant of the mainstream history being overturned. So the various people lecturing her have to first explain everything that the writer claims is in the textbooks, then go through it all AGAIN. There's no conflict, no development, not enough space for personalities, and it all takes place in settings that are too bland to provide an interesting background.

As fiction, it fails. As intellectual argument, it fails; there are no footnotes or citations and you are left having to take too much on trust (there is, fortunately, a bibliography. And, yes; I'm familiar with several of the books named. I'm strictly an amateur but I have read a book or two. Which is why I know the way the "official view" is being portrayed is overstated, but defensible for the purpose of the argument.)

Thing is, the Crete sequence demonstrates how it should have been done. How it was done, there. We didn't need this. We didn't need to sit around a table with Cassie for a dozen chapters getting lectured at. We could have learned all of this while climbing the hillsides of Crete and wandering the restored sections of Knossos under the hot Mediterranean sun.

If, somehow, the book could have started there, I would have no problem giving it full recommendation.
Read more
45 people found this helpful
Helpful
Report abuse

John
3.0 out of 5 stars Hard to get into
Reviewed in the United States on November 5, 2018
Verified Purchase
Indiana Jones or Dan Brown - The Granite Key doesn't come close to either. The story began with an antique storekeepers death...a real who done it...now, to find out who and why. The reason comes soon enough and readers are then introduced to the two forces that will fight one another in the book. However, most of what follows is the continued lecture about history and other civilizations. The continued "action" and actual time in the field are few and don't come until the last few chapters in the book. Then, expecting some reward, readers learn that there are five artifacts which are hidden separately, and all we've managed to solve after 200+ pages was a hint on where the first one might be located. The story ends at this point, and readers should purchase the next installment to continue the expedition. Upon finishing, I learned that there are six more books in the series and sense that they will all be the same as this one...too much lecture, little action, and no reward for readers. Therefore, I will not be continuing this series.
Read more
15 people found this helpful
Helpful
Report abuse

Amazon Customer
1.0 out of 5 stars There is No ending
Reviewed in the United States on July 8, 2019
Verified Purchase
There is No point in all of the history. Too long without an ending. I felt like I wasted my time.
Read more
21 people found this helpful
Helpful
Report abuse

Kindle Customer
5.0 out of 5 stars Mariana Rocks!
Reviewed in the United States on September 17, 2017
Verified Purchase
I waited until I completed the series to write this and purposely came to book 1 to leave my review. This series is so thorough with archaeology explanations that you forget that you're reading a work of fiction. Since I'm not an archeologist I couldn't tell you what, if any, are fact. Doesn't matter. The series does exactly what a good book should; it makes you think!
Yes, I fell in love with the history portion but I also came to care about each character. Maybe some (Cassie, Griffin, Erik, Daniel) more than others (Abraham, Leroy), but each equally important to the story.
As one who constantly has a book in progress, I find it hard to believe that a fellow reader would not enjoy this series as much as I did.
Read more
4 people found this helpful
Helpful
Report abuse
See all reviews

This was quite an entertaining story but I think it is targeted at the older children/teenage reader rather than the adult market. My granddaughter certainly enjoyed it but as an adult the writing style was not really strong enough to hold my interest although the storyline was interwoven with some interesting anthropological theories.

Not the authors fault but I do wish there was some way that adult books could be separated from teenage fiction in the Kindle listings before purchase as the reader demographic is seldom made clear in the book description.

John Vickers
5.0 out of 5 stars Very interesting and compelling
Reviewed in the United Kingdom on June 19, 2021
Verified Purchase
Pardon the cliche but I found this book a real page turner. I knew nothing about this book before I started to read it and I was hooked from the first couple of pages. It reminded me of the first time I read the da Vinci code by Dan Brown. I will definitely be reading book 2!
Read more
Report abuse

Fee
3.0 out of 5 stars A great read but.....disappointed
Reviewed in the United Kingdom on June 10, 2012
Verified Purchase
Read books 1 and 2 and really enjoyed them, liked the way the characters are growing together. Went back to Amazon to download the reaminder of the 7 (yes 7!) books in the series, to find that these are the only 2 available on Kindle. Very disappointed. Would have been 4.5 or 5 stars if this had not been the case
Read more
One person found this helpful
Report abuse

Lynda Colley Originals
5.0 out of 5 stars The Granite Key (The Arkana Series)
Reviewed in the United Kingdom on November 3, 2011
Verified Purchase
I found this book quite by chance....it gripped me to the point of distraction. I didn't realise I had read to the end, and I can't wait for the next book in the series to become available.
A thoroughly enjoyable read.
Read more
2 people found this helpful
Report abuse

Linda
5.0 out of 5 stars A great find.......
Reviewed in the United Kingdom on April 23, 2012
Verified Purchase
I really enjoyed this - it was a good mixture of intrigue, excitement and enlightenment. Well written and interesting characters. I have bought the second one in the series and am looking forward to reading it. Will definitely buy the next one when it's released.
Read more
2 people found this helpful
Report abuse
See all reviews