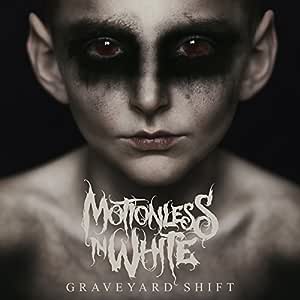 GRAVEYARD SHIFT's striking artwork was selected from over 2000 contest entries from fans and designers in partnership with Creative Allies. The contest's winner, Crystal Johnson, created the album's cover as well as other elements in the album.
GRAVEYARD SHIFT follows 2014's chart-topping REINCARNATE, which debuted at #1 on Billboard's "Top Rock Albums" chart as well as at #9 on the overall SoundScan/Billboard 200. Motionless In White's third studio album was highlighted by the blockbuster title track, a top 20 Active Rock radio favorite accompanied by a striking companion video now boasting nearly 13 million individual views at YouTube alone.
Motionless In White will celebrate GRAVEYARD SHIFT with nearly non-stop touring, beginning with a lead support slot on Atlantic recording group In This Moment's upcoming "Half God Half Devil Tour." The dates begin Friday, April 7th at Milwaukee, WI's Eagles Ballroom and then continue through mid-May (see attached itinerary). For complete details and remaining ticket information, please visit www.motionlessinwhite.net.

4.8 out of 5 stars
4.8 out of 5
280 global ratings
How are ratings calculated?
To calculate the overall star rating and percentage breakdown by star, we don’t use a simple average. Instead, our system considers things like how recent a review is and if the reviewer bought the item on Amazon. It also analyzes reviews to verify trustworthiness.

lifeispeachy
5.0 out of 5 stars Loud, Rude and Crude a delicious brew by Motionless in White
Reviewed in the United States on May 5, 2017
Verified Purchase
This album is awesome it's got the heaviness of creatures. My favorite songs are 570, Loud, Eternally Yours, Hourglass and The Ladder. If you've watched The Neon Demon there's a nice surprise for you in the song The Ladder. Overall this album is great. It's everything you could want from an album from these guys. Buy it!
Read more
3 people found this helpful
Helpful
Comment Report abuse

sd
5.0 out of 5 stars Amazing!
Reviewed in the United States on November 4, 2017
Verified Purchase
I've been looking forward to this CD for quite some time. It arrived in perfect condition, very well packaged (in regards to keeping the package safe from damage, I don't care if it looks pretty or not). As for the music, it's a little different than their usual stuff, but not so drastically that they sound like a totally different band. All in all, I'm very happy with this purchase!
Read more
One person found this helpful
Helpful
Comment Report abuse

DDR
5.0 out of 5 stars Wow, mind = BLOWN
Reviewed in the United States on May 5, 2017
Verified Purchase
This album blasted it out of the park of expectations for me. I am very pleased with this album. Motionless In White has become my current favorite band. I hope future albums are great like this one.
I hope I can see them live when they come in town next month.

T. Conrad
5.0 out of 5 stars Best band I've heard in awhile!
Reviewed in the United States on August 26, 2017
Verified Purchase
I can't believe it took me this long to find out about this group - they're amazing! Different CDs (and songs within CDs) sound like different groups have influenced them, but some of the groups that they can sound like include: Breaking Benjamin (heavier version), Marilyn Manson, Atreyu, and Underoath. Their earlier CDs sound more like the latter 2 on that list, while the 4 newer albums have a wide mixture on influences. They're heavy, but very good. Vocals vary from melodic to screaming, even within songs, but very well done. I'd definitely recommend!
Read more
Helpful
Comment Report abuse

Violet
5.0 out of 5 stars You'll love every second
Reviewed in the United States on November 23, 2018
Verified Purchase
This is one of those albums where you never skip a song. Each track is so unique and diverse. Motionless In White are unlike any other musicians out there. They are an immensly talented band. Even more incredible is their live performances.
Read more
Helpful
Comment Report abuse

DANIEL TAYLOR
5.0 out of 5 stars Graveyard Shift has arrived
Reviewed in the United States on May 7, 2017
Verified Purchase
Great album. The guys really made something special. Its a combination of Creatures + Infamous + Reincarnate. The supporting group (Bass/Drums/Guitar(s)) bring out Chris's vocals and make the lyrics more entertaining. Not a bad song on it and really lifts your mood. Enjoy.
Read more
2 people found this helpful
Helpful
Comment Report abuse

Justin
4.0 out of 5 stars Great follow up album but not better then creatures
Reviewed in the United States on November 11, 2017
Verified Purchase
Motionless in white is at it again. This is the follow up to reincarnate definitely a push forward from that album it was good but this is better. Catchy songs fun riffs plays with styles one song reminded me of creature feature. Pick up the album if you haven't yet.
Read more
Helpful
Comment Report abuse

jsmith3324
5.0 out of 5 stars Awesome music
Reviewed in the United States on January 9, 2020
Verified Purchase
Love it I plan on burning all to lossless flac files for my usb all albums. Great hard core music and sound great with subs in the trunk.
Read more
Helpful
Comment Report abuse
See all reviews

Jack Ransom
5.0 out of 5 stars Motionless In White - Graveyard Shift
Reviewed in the United Kingdom on May 7, 2017
Verified Purchase
Got this album on the release day and got around to listening to it yesterday. The more I've listened to them the quicker Motionless In White have become one of my favorite bands, I own the first 3 albums and its cool hearing their sound develop over time, 'Creatures' was a full on metalcore record featuring heavy breakdowns and melodic choruses, 'Infamous' took that sound and added industrial and electronic elements and then on 'Reincarnate' they took various inspiration from modern metal acts and the gothic elements of Marilyn Manson/Cradle of Filth. In my opinion 'Graveyard Shift' is a blend of the first two albums, some of the gothic elements of 'Reincarnate' are still here but not as much as the heaviness and electronic elements seen in the first two albums. I'm gonna do an quick review of each track on the album explaining why they are awesome (spoilers this album slays and you should buy it)

1. Rats - This was the last single released a few days before the album, its a good song but not one of the strongest on the album, it's got a 'Creatures'-era sound to it and catchy chorus. I don't think it was the strongest album opener.
2. Queen For Queen - This song is the most gothic/Reincarnate vibe track on the album, with a strong chorus and electronic edge.
3. Necessary Evil (feat. Jonathan Davis) - One of the best tracks on the album, bonus the fact that Davis is on the track (Korn being one of my favorite bands), opening riff is a cool tribute to 'Blind' its a heavy industrial influenced tracks and Davis' vocals work well with Chris Motionless', also the lyric - "Imma have my f***** cake and you too" is awesome before a breakdown.
4. Soft - My favorite song on the album and probably one of the heaviest MIW have written it has a fast thrashy riff, good drum-work and a mixture of screaming vocals and another well written chorus. Also it features another stupidly good pre-breakdown line - "So suck my middle-f****** - finger!"
5. Untouchable - Probably one of the most melodic and radio-friendly songs the band have written (I'm surprised it wasn't a single), cheesy lyrics aside this electronic-tinged track is catchy and has good motivational/"I don't care what people think" message.
6. Not My Type: Dead As F*** 2 - Sequel to the song on 'Reincarnate' basically about Chris Motionless being attracted to a certain type of woman ("If she's got a pulse then she's not my type"), it's very 2003-era Manson with a circus vibe and with a theme which basically MIW's version of A7X's 'A Little Piece Of Heaven' with the choir vocals and a choir style vocal.
7. The Ladder - A song about the movie 'The Neon Demon' and about a girl sleeping her way to fame, its another thrashy/punky song with some good lyrics.
8. Voices - Another catchy electronic influenced song, fairly similar to 'Untouchable', the lyrics focus on anxiety/ocd etc. so they are relatable and the chorus is well structured and catchy.
9. LOUD (F*** It) - The third single released from the album, possibly the most unique and different sounding song, imagine a nu-metal rapping Marilyn Manson and this is basically this song.
10. 570 - This was the first song to be released as a single last year, it basically confirmed that MIW hadn't completely abandoned the 'Creatures' style, a good way to show the band's intentions for 2017.
11. Hourglass - Another good heavy song, probably the least memorable on the album.
12. Eternally Yours - The second single and arguably the most popular of them, the song is catchy emotional blast with a good mid-breakdown balanced with the melodic chorus.
Read more
6 people found this helpful
Report abuse

suzanne k cruickshank
5.0 out of 5 stars You will love this CD.
Reviewed in the United Kingdom on May 28, 2017
Verified Purchase
Amazing CD sang by Cris Motionless. I loved the first song I lisened to years ago, and the quality has not droppped.
Read more
Report abuse

Coragoth
5.0 out of 5 stars Five Stars
Reviewed in the United Kingdom on August 15, 2017
Verified Purchase
Absolutely incredible album. Purchased after watching them at Download this year. Every metal fan should own this.
Read more
Report abuse

Draven Payne
5.0 out of 5 stars My Favourite Band!
Reviewed in the United Kingdom on July 16, 2019
Verified Purchase
Love all there Albums.I gotta say I think this is there best.Rocks From Start To Finish
Read more
Report abuse
See all reviews