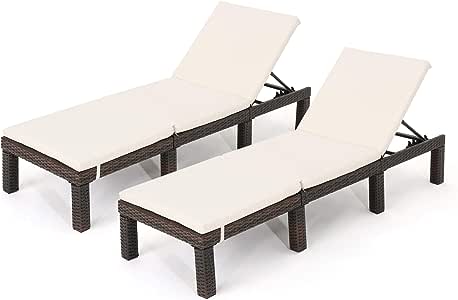 by Christopher Knight Home
3.3 out of 5 stars 82 ratings
Available from these sellers.

Oh, those hazy, lazy days of summer lounging by the pool. Or reclining on the deck with a glass of rosé. Or gazing at the stars next to someone you love. Make those moments even more perfect with the right chaise beneath you. Ours are long on style, comfort, and affordability, so you can relax and make the most of the season.

Lounge in comfort with the Estrella Chaise Lounge Chair. The adjustable backrest gives you lounging options for your preference and the water resistant cushion is convenient for poolside sunbathing. The brown PE wicker frame is neutral in color to complement existing outdoor furniture. This chair is a great way to add to your outdoor decor, while being practical. *Towels not included

3.3 out of 5 stars
3.3 out of 5
82 customer ratings
How does Amazon calculate star ratings?
Amazon calculates a product’s star ratings based on a machine learned model instead of a raw data average. The model takes into account factors including the age of a rating, whether the ratings are from verified purchasers, and factors that establish reviewer trustworthiness.

Craig
3.0 out of 5 stars Does leave rust stains
Reviewed in the United States on October 7, 2016
Verified Purchase
Product is sturdy and cushions are decent for the price. They do unzip so you can take the cushions out and wash the cushion covers in the washer. My complaint is the metal parts do rust and do cause rust stains. If you do not leave outdoors during rain or use a cover you are set, but I ordered these for outdoor use and have plenty of rust spots under the legs.
Read more
44 people found this helpful
Helpful
Comment Report abuse

ShichidanBB
4.0 out of 5 stars Almost perfect...
Reviewed in the United States on June 29, 2017
Verified Purchase
OK, so, overall I really like this lounge. It is pretty sturdy and suits my need well. I bought it to just get a little sun while reading, so I can't comment on how it would hold up next to a swimming pool, what with the chlorine and other chemicals getting on the material. That said, I do find it slightly, "hard", in the middle where the bend is between the flat part and elevated part...but nothing terribly uncomfortable and is only actually felt if lying on your stomach.
If I have any complaint it's that this lounge is heavy enough that, once placed, moving it into or out of the sun/shade is a chore. I would have given the manufacturer a 5 star rating if they had included casters on the legs at just one end. But, they didn't, so I did my own improvising and will pass it on to you. You can see what I'm talking about from the pictures I posted.

To begin, I just wanted to be able to lift one end to move it around, so I only put on two make-shift casters on the legs where the back rises. If you wanted, you could put them on all (6) legs to roll it around instead of having to lift one end; the choice is yours. When you check the bottom of the legs you'll find a plastic cover on them which pops off quit easily. Don't even think of using these, they're to fragile and won't work. Behind the plastic ends it is hollow for 9" and then has a metal plate, probably part of the framing. The area the plastic covers is a hair over 2" x 2". What I did was to go to Home Depot and buy a piece of wood that was square to fit the opening. MAKE NOTE: I did NOT buy a regular piece of 2" x 2" because in construction that is actually a little over 1.5" x 1.5". Instead, I went to the section in the lumber department that has pre-shaped wood legs for tables, chairs, etc. There I found a Waddell square dowel that measured 1.75" x 1.75" x 36" which is about as close as you can get to the 2" x 2" opening. If you're going to Home Depot, their stock number is either 8322U or 468230 and it cost around $9 out the door. I had the lumber guys cut me two 9" pieces, (cuz I'm lazy). You can then take those over to the casters and pick a pair. They have various types but I decided, (because of size), to go with the Everbilt 2" Soft Rubber Threaded Stem Casters with 80 lb. Load Rating (2 per Pack). Finally, I picked up a pack of 5/16"-18x3/8" T-Nuts.
The assembly was as follows:

Start by finding the center of the wood. Measure the length of the threaded stem. Drill a 5/16" hole in the center the depth of the stem. Hammer the T-Nut into place. Screw the caster into the T-Nut until it is flush with the wood. FYI, you may have to adjust the depth of the hole and outer edge a little to accommodate the T-Nut and caster stem. Repeat this for both legs. At this stage you can now insert the wood dowels into the legs and you're done. Just make note that these will be somewhat loose and if you were to lift the end too high off the ground, they will fall out. If you want to enhance your work you can secure the wood legs by attaching fasteners to the outside of the lounge legs so they won't come out. I didn't do the extra work because I'll only be moving the lounge a few feet at a time.
That's it. As I said, if the manufacturer was to put those casters on their product this would be a 5 star instead of 4 review. Hope this helps.

Amazon Customer
5.0 out of 5 stars Comfortable and affordable.
Reviewed in the United States on May 15, 2017
Verified Purchase
Overall the lounge chairs look great next to our pool. They are extremely comfortable, and complement out outdoor space very well. You can adjust the chair to various positions from flat to a comfortable reading position. Also its nice that the cushions are white, since the sun doesn't make them unbearable to enjoy in the warmest of days. The installation was easy and quick. Living in the Midwest, I like that the chairs fold flat (for storage) for the winter with the exception that the legs need to be unscrewed (a quick solution). Although this is outdoor furniture, from experience I strongly recommend to purchase chaise covers, as the elements can take a toll on the most expensive of furniture. This will prolong your lounge chairs and keep them looking new for years, a small price to pay in my opinion. Overall a great purchase at a very reasonable price, would highly recommend.
Read more
7 people found this helpful
Helpful
Comment Report abuse

We bought 6 of these in July of 16. Less than a year later, 4 of them are rusted and unusable. Some legs have fallen off.

These are beautiful chairs but apparently very poorly made.

Called customer support and they say the warranty is 60 days. A bit unreasonable for a faulty inferior product in my opinion.
Read more

Cammie Adams
1.0 out of 5 stars Not worth it.
Reviewed in the United States on September 15, 2018
Verified Purchase
We’ve had our lounge chairs for one year. After one year, they are rusting and falling apart at the legs. The picture shows rust falling through the synthetic wicker. The legs simply screwed on and now are bowing out. I thought that the quality of these chairs would be great for the price we paid. The synthetic wicker had held up well but the metal on these are not weather resistant.
Read more

40Something
3.0 out of 5 stars Great chairs but missing necessary hardware
Reviewed in the United States on March 15, 2016
Verified Purchase
The chairs are really nice but one is missing the hardware necessary to install the legs. I emailed the seller but no response. Very frustrating.
Read more
21 people found this helpful
Helpful
Comment Report abuse
See all reviews from the United States

Page 1 of 1 Start overPage 1 of 1
This shopping feature will continue to load items when the Enter key is pressed. In order to navigate out of this carousel please use your heading shortcut key to navigate to the next or previous heading.
Back
Next
Pages with related products. See and discover other items: lounge furniture, chairs for sunbathing, chaise cushion, chaise lounge cushions outdoor, outdoor lounges, set of 2 patio chairs