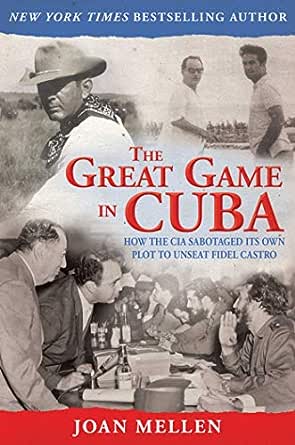 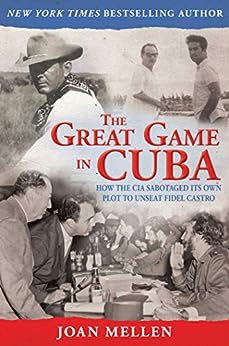 The Great Game in Cuba: CIA and the Cuban Revolution Kindle Edition

It is no secret that the CIA engaged in a variety of schemes, some bordering on farcical, and utilized a variety of unsavory individuals (or “assets”) to carry out the removal of Fidel Castro. After the brush with nuclear war during the Cuban missile crisis, those efforts were largely abandoned. But for die-hard anti-Castro Cubans and their American supporters, the efforts continued. Mellen, a journalist and professor of English at Temple University, has written an interesting but often confusing chronicle of some of these efforts centered around Robert Kleberg Jr. Kleberg owned the giant King Ranch in Texas and had owned ranches in Cuba, which the Castro government expropriated. He was aided by several Cuban exiles who had originally supported Castro’s efforts to topple the Batista regime. When Mellen sticks to their plots, her story is often absorbing, but she frequently veers off into diatribes against the supposed duplicity of the CIA, primarily because it kept Kleberg and his associates at arm’s length. Still, this is a useful, if uneven, examination of aspects of the long, futile campaign to oust Castro. --Jay Freeman --This text refers to an alternate kindle_edition edition.

“A ‘must read’ for the serious minded, who will find it both riveting and fascinating in yet another chapter of the untold history of the Cold War.”—Peter Janney, author of Mary’s Mosaic

“Until now, the role of Texas’ King Ranch in anti-Castro activities during the turbulent 1960s has remained largely unknown. Based on never-before-seen documents and interviews with key witnesses, Joan Mellen opens an important new window on the CIA's secret history.” —Dick Russell, author of On the Trail of the JFK Assassins

“Joan Mellen tells a brilliantly researched, meticulously supported, and compulsively readable tale that everyone concerned with how America operates should know.”—Samuel R. Delany, author of Dhalgren and Through the Valley of the Nest of Spiders --This text refers to the paperback edition.

Joan Mellen is professor emerita at Temple University, where she taught literature and creative writing for fifty years, and the author of twenty-four books.

Joan Mellen is the bestselling author of twenty books, including A Farewell to Justice, her biographical study of Jim Garrison’s New Orleans investigation of the Kennedy assassination. She has written for a variety of publications, including the New York Times, Los Angeles Times, Philadelphia Inquirer, and Baltimore Sun. Mellen is a professor of English and creative writing at Temple University in Philadelphia. --This text refers to an alternate kindle_edition edition.
Read more

Eric Selby
5.0 out of 5 stars This Is a Very Informative Book
Reviewed in the United States on April 21, 2013
Verified Purchase
Let me begin by saying this: the reader reviewer who says this book isn't much about the CIA quite clearly didn't read this really informative and well written book. These sentences come early on in the book: "These Texans [a reference to the mentality of the Texan culture] began from the premise that war was the price of the free pursuit of profit." And on the next page this: "War was about profit, not politics, which suited the defense contractors clustered in Texas. Wars of duration were preferable. The longer the war persisted, the greater the financial gain for the contractor." Think former vice president and once head of Halliburton, Richard Cheney!

I first heard about this book when the author was interviewed on an NPR show, either Diane Rehm or Terry Gross. A professor who teaches creative writing has written a piece of well research journalistic non-fiction? And since I live in Miami Beach and have become very interested in learning more about the more recent Cuban history, I decided to purchase the book. This week when one of my college students who is himself Cuban born saw the book, he asked if I would let him read it which I will. And before we ended the conversation, I confirmed how different what I told him I had read was from the propaganda Cuban students are fed.

This book has a complete bibliography as well as notes at the end. When I finished this book, I was more convinced than ever that the CIA is really a very dangerous organization and that, indeed, the reason the Bay of Pigs failed was because the CIA wished that, hoping that then-President Kennedy would focus on Vietnam where the CIA was certain the United States would find itself in a long, long war that would, of course, produce wealth for private enterprises--many out of Texas--who provide all the "stuff" needed in wars.

Michael Chesser
5.0 out of 5 stars The Great Game in Cuba is great reading
Reviewed in the United States on October 14, 2014
Verified Purchase
The Great Game in Cuba is great reading. The early history of the King ranch is a testament to ingenuity and persistence, and Joan Mellen thoroughly documents the trials and struggles of the early days of the ranch. The latter parts of the book document how Robert Kleberg expanded the ranch to other countries, especially into Cuba, and how this resulted in a working relationship with the CIA. She gives a sympathetic description of the Cubans who were exiled from their island, and of the manipulation of some of the exile groups by our government. This is an important part of American history, and I highly recommend this book.
Read more
2 people found this helpful
Helpful
Report abuse

Vaanx
5.0 out of 5 stars Fantastic!
Reviewed in the United States on August 23, 2017
Verified Purchase
A great read with lots of fascinating and little known history about Cuba after the murdering dictator took over.
Read more
One person found this helpful
Helpful
Report abuse

Frank Beckendorf
4.0 out of 5 stars Joan Mellen Has Distinguished Herself in this Subject Matter...
Reviewed in the United States on December 26, 2013
Verified Purchase
Joan's stuff tends to be well researched and tight for the reader. I highly recommend ALL of her stuff. Highly!
Read more
One person found this helpful
Helpful
Report abuse

TioK
5.0 out of 5 stars The lost story of why the USA lost to Castro
Reviewed in the United States on September 3, 2013
Verified Purchase
The account and truth why the CIA did not help and did not want the USA to through Fidel from power.
Read more
One person found this helpful
Helpful
Report abuse