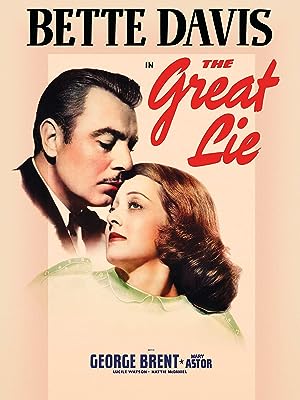 (345)7.21 h 47 min1941NR
Believing her husband to be dead, a flyer's wife bargains with his former love to adopt the woman's baby. Starring Bette Davis, Mary Astor and George Brent.

KaseyGReviewed in the United States on August 22, 2018
4.0 out of 5 stars
Bette Davis Being Noble
Verified purchase
Like many, I prefer Bette when she’s BAD, so I was surprised I liked this as much as I did. Miss Davis underplays and is the noble one here so Mary Astor has the flashier role and she’s GREAT in it. She actually steals the movie from Bette. The plot is so convoluted but hey, this is the stuff that made the prime time soaps like DALLAS, KNOTS LANDING and FALCON CREST so addictive in the ‘80s. Not one of Bette Davis’ most famous films but I liked it better than more noted ones like JEZEBEL or NOW VOYAGER.
13 people found this helpful

BobH Reviewed in the United States on September 21, 2020
5.0 out of 5 stars
A PLEASURE TO WATCH - BETTE AT HER BEST
Verified purchase
Bette Davis can play a monster ("Another Man's Poison," "Whatever Happened to Baby Jane") or a "nice and normal" lady (this film, "Old Acquaintance") equally well.

"The Great Lie" (1941) is a thoroughly enjoyable vehicle for so many reasons.

Aside from the entertaining - and beautifully photographed - story starring Bette, George Brent ("Dark Victory") and Mary Astor (the imperious, spoiled concert virtuoso), we take great pleasure in Hattie McDaniel's ("Mammy" in "GWTW") delightful performance. It's an added bonus to see her in this important role - both humorous and touching.

Max Steiner's always-flawless music adds much to the success of this picture, as he incorporates themes from Tchaikovsky's Piano Concerto No. 1 in B-flat minor (played by Astor's character) into his refined score.

This film is a pleasure to watch from beginning to end. And I heartily recommend it.

PamelaReviewed in the United States on June 26, 2020
5.0 out of 5 stars
Rainy day perfection!
Verified purchase
This is a great rainy day movie. I saw it once...rainy day cleaning...left the tv on for noise... and boom! I heard the twist to the story...and I was hooks. This movie, for in its time was interesting. The strategy of two women in love with the same guy....true love shows its head...through death....old movies are far better and less govt push involved.
4 people found this helpful

Lori Ann CannonReviewed in the United States on January 25, 2019
5.0 out of 5 stars
Love it
Verified purchase
This movie is amazing and good quality
5 people found this helpful

lawyeraauReviewed in the United States on January 20, 2002
5.0 out of 5 stars
TWO DIVAS FOR THE PRICE OF ONE..AT THEIR MELODRAMATIC BEST..
Verified purchase
This 1941 film release is a superlative melodrama with a classic cast. The stellar ensemble of Bette Davis, George Brent, Mary Astor, Hattie McDaniel, and Lucille Watson lights up the screen in this story of true love. It is Mary Astor, however, who sends it soaring and leaves little doubt as to why she won an Oscar for Best Supporting Actress.
Mary Astor plays the role of Sandra, a temperamental concert pianist, who marries Peter (George Brent), the on again, off again beau of Sandra's rival, Maggie (Bette Davis). They get married while Peter is in an alcoholic stupor in New York. After spending the night together, it turns out that their marriage was not legal, as Sandra's divorce from her first husband was not final. When Sandra is faced with the choice of marrying him on the day the divorce is final or playing a concert, she makes a choice that leaves Peter free to marry Maggie.
Shortly after their marriage, Peter, an experienced aviator and cartographer, is called away on a governmental mission. In the interim, Sandra tells Maggie that she is carrying Peter's child and vows to use that fact to get him back. Peter's plane, however, is reported missing over a remote area of the Amazon jungle, and he is presumed dead. This, of course, throws a monkey wrench into Sandra's plans, as she does not want the baby without Peter. Maggie, who is not pregnant and has no hope now of ever having a child by Peter, strikes a deal with Sandra that will allow Maggie to pass off Sandra's and Peter's baby, as if it were hers and Peter's. It is like making a pact with the devil, as Maggie will soon find out.
This is an enormously entertaining film with great dialogue between the two protagonists, Sandra and Maggie. Ms. Astor does a decided star turn as the temperamental and brilliant, world acclaimed concert pianist. Ms. Astor plays her as a diva of the first order, and she deservedly won an Academy Award for her performance. The role of Maggie, who is the good girl from the south, has its moments in the hands of such an accomplished actress as Ms. Davis. The dialogue between the two is always crisp and interesting. George Brent is perfectly cast in the role of Peter, a wealthy chap who is desired by two gloriously different women. Lucille Watson has a small part as Maggie's aunt, and Hattie McDaniel plays Maggie's ever present mammy. The film is topped of by the powerful music of Tchaikovsky's Piano Concerto.
This is a film that lovers of classic melodramas will enjoy, as will lovers of classical music.
57 people found this helpful

buckieReviewed in the United States on October 4, 2011
5.0 out of 5 stars
SO IT'S A LIE!WHO CARES?
Verified purchase
WOW!!!THIS IS A GREAT DAVIS FILM.FOR ONCE SHE'S THE "SWEET" LITTLE THING IN LOVE WITH ANOTHER WOMAN'S MAN...BRENT,WHO HAS A WIFEY ,ASTOR. ASTOR IS GREAT HERE AS A REAL ARTISTIC "BITCH"QUEEN WHO HAS THE MISFORTUNE OF HAVING GOTTEN PREGNANT BY BRENT BEFORE A QUICKIE DIVORCE WHERE UPON BRENT MARRIES DAVIS.THIS WAS A REAL ADULT SCRIPT FOR IT'S TIME..AND FROM WHAT I UNDERSTAND DAVIS AND ASTOR REWROTE SOME OF THE SCRIPT.BRENT MISTAKENLY DIES AND BETTY WANTS THE BABY THAT ASTOR DOES'NT WANT,AS IT WILL INTERFER WITH HER CAREER AS A CONCERT PLAYER.SHE AND BETTY MAKE A DEAL THAT BETTY CAN HAVE THIS CHILD AFTER BIRTH AND CLAIM IT AS HER OWN. BUT WAIT...BRENT IS FOUND ALIVE AND ASTOR WANTS HIM AND HER BABY BACK!WHAT'S A BETTY TO DO?THIS FILM IS LONG BUT WILL WORTH THE TIME AND MONEY.AND IT DEALS WITH ADULT THEMES NOT USUALLY FOUND IN FILMS MADE AT IT'S TIME/
7 people found this helpful

Terra D. BeezelReviewed in the United States on April 6, 2009
5.0 out of 5 stars
THE GREAT LIE is WONDERFUL!!!
Verified purchase
THE GREAT LIE is really Bette Davis at her finest. She and George Brent always seemed to make magic on film and a chemistry that is so intense the audience can't help but feel, and they didn't fail us with "The Great Lie". Bette Davis and fellow star Mary Astor work off of each other in a glorious way and keep you enjoying both characters and wanting to see "just how much can you rely on a promise from a woman who loves the same man you do". They make you laugh, they make you cry, they make you furious...they are AMAZING in this film.
As a side note, Mary Astor respected Bette Davis' work so much, when they made "Hush Hush Sweet Charlotte", even though Astor had a rather small (but very important) part in the movie and not even a scene together with Davis, she wanted Davis on the set because she respected her opinion so much! So check out "The Great Lie", it wont disappoint.
5 people found this helpful
See all reviews
Back to top
Get to Know Us
Make Money with Us
Amazon Payment Products
Let Us Help You
EnglishChoose a language for shopping. United StatesChoose a country/region for shopping.
© 1996-2021, Amazon.com, Inc. or its affiliates