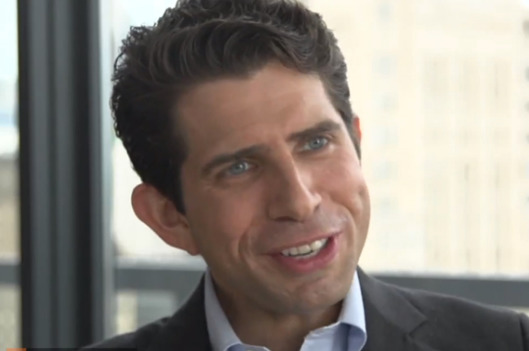 Greed Is Good: The Capitalist Pig Guide to Investing Paperback – May 19, 1999

Greed, in Jonathan Hoenig's estimation, is passion. It's lust. It has nothing to do with single-minded accumulation and everything to do with freedom, with the ability to pursue the things that make you happy. Hoenig received his first real introduction to greed while working at Starbucks as a teenager. He found that the money he earned after buying a few shares of Starbucks stock greatly exceeded what he made as an after-school wage slave. While in college, he started a radio show called Capitalist Pig, which now plays in 18 states. Greed has been good to Hoenig.

In Greed Is Good, he wants to share the wealth with his post-baby-boom generation by preaching the gospel of investing. But investing isn't just about choosing mutual fund A over mutual fund B. It's about not spending money on useless stuff, leaving more money for the things that are meaningful. Hoenig understands how frills like designer clothes, CDs, and, yes, Starbucks coffee can seem like necessities, when really they're lifestyle add-ons that can be eliminated. Doing without such excesses can be painful, but that's something else Hoenig believes in; not only is greed good, so is discipline, sacrifice, and self-denial. Greed is written in an eclectic style that includes Yiddish phrases, street slang, and generational cultural references ("Whatchu talkin' 'bout, Willis?"), which serves two purposes: it's very entertaining to read, and renders the often-dry message of "Save and invest" infinitely more palatable. --Lou Schuler

Given the "slacker" stereotype perpetuated for so-called Generation Xers, it is certainly ironic that adults under the age of 33 are saving at a much higher rate than their "boomer" brothers and sisters. According to the Retirement Confidence Survey, more than 19 percent of this younger group have already set aside $50,000 or more. Beth Kobliner broadly targeted these savers with Get a Financial Life (1996), her cover-all-the-bases guide to financial planning. Now Hoenig zeros in with this advice strictly on investing. Only 23, Hoenig obviously knows how to get the attention of others in his age group. In 1996, he developed a personal finance talk show called Capitalist Pig for Northwestern University's student-run radio station. Since then, the program has expanded to two hours and can be heard in 18 states. Hoenig's approach is decidedly youthful and irreverent. Underneath the fun and games, though, his advice is thorough, sensible, and conservative. He focuses on stocks, bonds, and mutual funds, but he also introduces options and futures trading. David Rouse

"Greed Is Good is great. In a most entertaining way, Jonathan Hoenig packs the book with practical information and investing advice that is a joy to read." -- Leo Melamed, Chairman Emeritus and Senior Policy Advisor, Chicago Mercantile Exchange

"Hoenig is a marvel."

"Hoenig is the voice of finance for Generation X."

"I've never laughed so hard at something so serious as investing." -- Fred Berry, "Rerun" from Tv's What's Happenin'? and president, Show Us the Money Management

"I've never laughed so hard at something so serious as investing."

"In his book, Greed Is Good, Jonathan Hoenig does a superb job defining investment basics: what stocks, bonds, and mutual funds are, and why any person would want to invest in any of them. This book is an excellent read for the 20-something age group that understands the importance of developing a successful investment program but doesn't know where to begin." -- David P. Brady, CFA and Senior Portfolio Manager, Stein Roe Young Investor Fund

"Jonathan Hoenig deploys an engaging and entertaining style to convey substance of uncommon sense. Who would have thought a cunning Gen Xer would provide so much insight and information not only to his cohorts, but even to those boomers willing to listen and learn." -- Michael Medved, film critic and radio host

"Welcome to finance MTV style[Hoenig is[ the voice of finance for Generation X." -- Forbes

"When a personal finance radio program is called 'Capitalist Pig' you don't need an economics degree to know it's a show of a different stripe.' -- Wall Street Journal

Before Jonathan Hoenig could drive, he was trading stocks and options. By the time he could buy alcohol, he was advising fellow students on achieving financial success. Today, he is the host and producer of "Capitalist Pig," the first radio program dedicated to the financial needs of eighteen- to thirty-five-year-olds. A trader on the Chicago Board of Trade, he also writes a monthly financial column for P.O.V. magazine and serves as a regular commentator on PRI's "Marketplace." Hoenig has consulted with companies such as Visa and Van Kampen Funds and has been profiled on MTV, CNN, Fox News, and in the pages of such publications as Institutional Investor and the Wall Street Journal.
Read more

The best part of the book is the last third of it, which deals with "speculation". In this section, Hoenig talks dramatically about what it's like to invest money in such highly volatile assets as futures and derivatives. After reading this section, I wanted to go gamble all of my money away on soybean contracts immediately (even though Hoenig says to only speculate with a tiny fraction of your assets). Unfortunately, I then remembered (depressingly) that I don't have any money to invest and that I was only reading this book to satisfy intellectual curiosity.

Hoenig has definitely convinced me that investing can be fun. As soon as I get some extra cash, I'll start implementing his strategies step-by-step, beginning with the (admittedly boring) safe investments discussed in the first few chapters.

Curtis G
VINE VOICE
4.0 out of 5 stars Entertaining and informative, but...
Reviewed in the United States on September 17, 2008
Verified Purchase
I regret that it took me until my mid-30s to get interested in money and finance; I regret more that it took me until my early 40s to feel like I actually had money to invest. If I'd been smarter--or if, perhaps, I'd had this book--when I was younger, maybe I wouldn't be playing catch-up now. With this book (and/or with others like it), I hope to give my son the financial education I never got. This one, of course, will have to wait until he's in his teens.

Hoenig gives a good overview of the stock market and its related "instruments." Puts and calls still give me trouble, but he clarified limit orders for me. The book is both informative and entertaining, and Hoenig definitely conveys his passion for the subject. Of course the pop culture references are dated, but who doesn't love some '80s nostalgia?

My major gripe: typos. Hoenig appears to have a problem distinguishing between "then" and "than." I took to reading the book with a pen in hand; I think I corrected at least one typo per page. Was the proofreader on vacation that week? That aside, I will keep this in my collection for my son. Maybe by the time he's old enough to appreciate it, he'll find the 20th century pop culture references quaint.
Read more
One person found this helpful
Helpful
Comment Report abuse

P. Milstead
1.0 out of 5 stars book is for a beginner
Reviewed in the United States on June 16, 2014
Verified Purchase
the book is not what I expected at all. It did not say much for real investors. Alright for a beginner.
Read more
Helpful
Comment Report abuse

James Buchanan
5.0 out of 5 stars Greed Is Good - Capitalist Pig Guide to Investing
Reviewed in the United States on July 20, 2011
Verified Purchase
This book is a great starting point for the beginning investor. It is what one would expect from a young Jonathan Hoenig. He is open ant to the point.
Read more
One person found this helpful
Helpful
Comment Report abuse
See all reviews