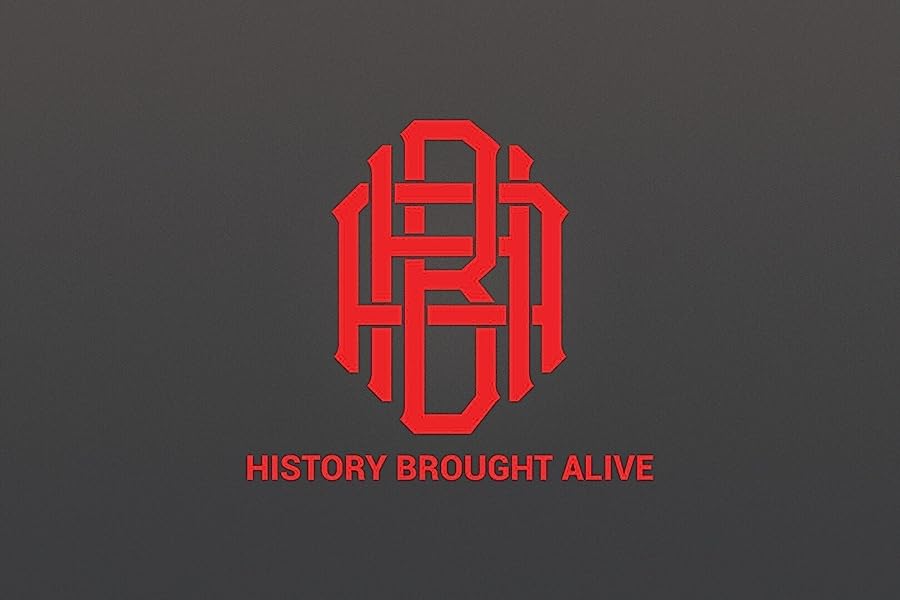 by History Brought Alive (Author)
4.1 out of 5 stars 75 ratings
See all formats and editions
Sorry, there was a problem loading this page. Try again.

Chaos was the origin of everything, the beginning of time. From Chaos sprang forth three primordial deities, Gaea, Tartarus & Eros...

Ancient Greece & its Mythology is Truly a Marvel of History

Greek Myths were more than just stories...,Take a deeper look and you will uncover the lessons, philosophies, wisdom and even warnings that these myths taught. In truth they are still relevant to this day.

Throughout your read, we will not simply rehash the ancient Greek myths of the time, but rather uncover the context and background behind them and the Ancient Greek world.

We want to make sure that you cannot only enjoy these fascinating myths but understand what they were like when they were told thousands of years ago.

All the secrets of one of the most fascinating civilizations the world has ever known lie within these pages.

Inside you will discover

And much, much more

Join us on an adventure to discover Greek Mythology and learn what life was like in Ancient Greece in This Book.

History Brought Alive is a company that specializes in writing expertly crafted works on ancient world history and mythology. The books we write are informative, factual, and ideal for anyone wanting to learn more about the past and the world we live in. Our books aim to teach the eager reader, to open your mind, and to challenge your assumptions about history in ways you never thought of before. This book is a timeless reference you will want to use over and over! These lovingly constructed works are written to endure. The legacy they produce will last through the ages and entertain, satisfy and empower generations of readers.

Marshai Johnson
2.0 out of 5 stars Historically Inaccurate
Reviewed in the United States 🇺🇸 on November 9, 2021
Verified Purchase
Some parts in this book are accurate but others are false information. Encountered spelling errors as well along with typing errors. I also ordered the book Ancient Egypt produced by them. Haven’t started it yet but honestly these will be the only 2 books I buy from this publisher.
Read more
One person found this helpful
Helpful
Report abuse

James A. Razinha
3.0 out of 5 stars Good summary that needs a little editing
Reviewed in the United States 🇺🇸 on July 2, 2021
I received a review copy of this from the publisher through BookSirens. It's a short book with a good overview of the titular subject, seeming to be aimed at children, or more probably young adults. The stories should be familiar... there aren't any new ones here if you've read a bit. But, they are all in one spot.

The authors open with "There is a reason why mythological beliefs are still studied to this day. These myths were not just stories and epic tales, but were a guiding system of humanity for hundreds of years that provided lessons, morals, hope, comfort, and played a crucial role in developing how we shaped modern thinking." Having made a passing study of many current and ancient religions with their embedded mythologies, yes, mythologies in general and Greek mythologies in particular are lasting (several modern active religions are nearly as enduring.) "Greek mythology is filled with stories of cunning succeeding over brute strength." And more than a bit of promiscuity, jealousy, deceit, ... I'd suggest parents read this before thinking about giving it to young kids "Aphrodite was married to the blacksmith god, Haphaetsus, however, this was not a happy marriage and Aphrodite was known to have several other lovers, most notably with the god of war, Ares. Perhaps Aphrodite’s promiscuity and her association with sex is the reason she had a large following from Greek prostitutes." The Greek pantheon were a randy group, after all.

There are some editing problems with typos and strange grammar. Following this:

the house of the gods and worship their honor through prayer and sacrificial offerings. The sacrifices made in the temples needed to be conducted by higher-ups, as no ordinary man nor woman could enter the temple, as it was forbidden in Ancient Greek customs. Instead, ordinary men and women would have to worship the gods from outside the temples of the gods or more often than not in their own homes.

is "However, if they were to workshop the gods by the temple they would generally have to worship the gods around the Temenos, which was a natural feature that generally surrounded the temple." I assume "workshop" was supposed to be "worship".

I'm not sure how this was supposed to read: "In Ancient Greece the gods were all-powerful and they all admired beings of the universe. "

This had me wondering if the book was translated from another language:"There are two myths that the foot race is representative."

There is a lot of immediate repetition of words: "Zeus was not the only god of the Greek pantheon to be associated with an iconic weapon. Many of the Greek pantheons had their favored weapons. " and the next sentence... "For Poseidon, he was closely associated with his iconic trident, ..." I admit not reading much nonfiction targeting young readers, so maybe that's the style to keep them reading, but I think some careful editing and rewording might be in order to also reach adults. I grew tired quickly of the repetition.

The last clause here is clumsy: "However, just like how the mortals would swoon over Psyche’s beauty, so did Eros and Aphrodite fell in love with the mortal as soon as he saw her and thus could not carry out his mother’s task."

Bottom line, a little tweaking and this would make a nice summary on the shelf.

Rosario M. Barrera
4.0 out of 5 stars Explaining myths
Reviewed in the United States 🇺🇸 on July 3, 2021
A very interesting book about ancient Greek myths. These are stories we already know, but they are analyzed in context with how the Greeks conducted their day to day business. There are stories about the Olympians, the Titans, and also the monsters such as Medusa. It is a great way to view history. Recommended.
Read more
Helpful
Report abuse

JODIE CARY
4.0 out of 5 stars Greek Mythology
Reviewed in the United States 🇺🇸 on June 28, 2021
I love History. I love learning new things about History. This book is on the Greek Mythology.. I have always loved reading about the Greek Gods, Goddesses and Monsters. This is a great read.

Joanna E.
5.0 out of 5 stars Of Gods and Monsters.
Reviewed in the United States 🇺🇸 on July 27, 2021
I have read Greek Mythology since I was a kid. I must have checked out every book on Greek Mythology. I love all the stories of gods and goddesses, monsters and heroes. They are the best. I was so excited when I saw this was available on BOOKSIRENS. I snatched it and read it in two days. It is so comprehensive not only did it talk about the stories of Aphrodite and others; it also explained the history of where the story originated. I especially liked that. It doesn’t read as cold and textbook. It is thoroughly researched and written as if the writer is sitting next to you telling you the story. This is the first book I’ve read by this author and will not be the last. I received an advance review copy for free, and I am leaving this review voluntarily.
Read more
Helpful
Report abuse

KU customer
5.0 out of 5 stars interesting
Reviewed in the United States 🇺🇸 on July 6, 2021
Always been fascinated with mythology especially Greek mythology. Seems to have boundless stories . I am no scholar nor by any means a historian ( I also have terrible comprehension) but this was easy for me to read, understand and enjoy. When I looked at Amazon it was also very affordable.

Highly recommend for history enthusiasts or lovers of those Greek myhtology inspired movies.

ShannaD
5.0 out of 5 stars Great Piece of Work
Reviewed in the United States 🇺🇸 on June 29, 2021
Greek Mythology: Explore the Timeless Tales of Ancient Greece, The Myths, History & Legends of The Gods, Goddesses, Titans, Heroes, Monsters & More by History Brought Alive. For anyone remotely curious about Greek Mythology to those that relish in it- this book is a great tool. It has always fascinated me, and I was glad I found a book that not only told the stories but also explained the history behind it all. I received a free copy of this book via Booksprout and am voluntarily leaving a review.
Read more
One person found this helpful
Helpful
Report abuse

ula
5.0 out of 5 stars Love myths
Reviewed in the United States 🇺🇸 on July 19, 2021
I enjoy mythologies. Greek is well known but still Enjoyable and ever present in pop culture. The one od good to read. Great book for myths and history lovers.

Tony TC
1.0 out of 5 stars Somewhat, no very disappointed
Reviewed in the United Kingdom 🇬🇧 on September 30, 2021
Verified Purchase
Firstly, the book is very thin for £19.99. Forgiving that, I thought it must be full of fascinating myths and stories, alas no. I wear glasses and found the print to be large. Sadly, I found the writing to be very basic (and full of spelling mistakes), along with the content and better aimed at the younger generation just starting out in Greek Mythology. For a company that states they specialise in writing expertly crafted works on ancient world history and mythology, I shall not be revisiting any of their books and I may have to hide this book behind some others..
Read more
One person found this helpful
Report abuse

Brian McGhee
1.0 out of 5 stars Damaged
Reviewed in the United Kingdom 🇬🇧 on July 11, 2021
Verified Purchase
Just received delivery 2 minutes ago. Book has been damaged. This is unacceptable considering it was £20.
Read more

1.0 out of 5 stars Damaged
Reviewed in the United Kingdom 🇬🇧 on July 11, 2021
Just received delivery 2 minutes ago. Book has been damaged. This is unacceptable considering it was £20.
Images in this review