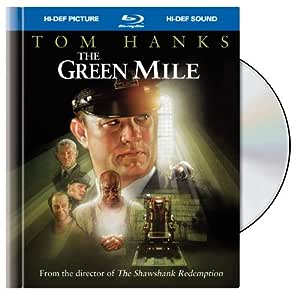 Miracles happen in unexpected places, even on death row at Cold Mountain Penitentiary. There John Coffey, a prisoner with supernatural powers, brings a sense of spirit and humanity to his guards and fellow inmates. Tom Hanks leads a stellar cast (including Michael Clarke Duncan as Coffey) in this emotional, uplifting story of guards and captives; husbands and wives; prisoners and a remarkable mouse named Mr. Jingles; and, on another level, of a moviemaker and his source. Frank Darabont returns after his 1994 directorial debut The Shawshank Redemption to adapt another Stephen King tale into a crowd-pleasing entertainment nominated for four Academy Awards, including Best Picture.

4.9 out of 5 stars
4.9 out of 5
5,061 global ratings
How are ratings calculated?
To calculate the overall star rating and percentage breakdown by star, we don’t use a simple average. Instead, our system considers things like how recent a review is and if the reviewer bought the item on Amazon. It also analyzes reviews to verify trustworthiness.

Donald J. Wurzelbacher
5.0 out of 5 stars Heartwarming Story
Reviewed in the United States on June 25, 2016
Verified Purchase
A beautiful story about hope and love and forgiveness. This is a very heartwarming story that sucks you in the entire time. An innocent man who has the mind of a child is on death row for a murder he did not commit. But throughout the time he awaits execution he has nothing but simple love for all he is in contact with. He has a special gift of healing that hurts himself whenever he uses it. But he selflessly heals others--the same people who are to put him to death (Not their desire..just their "job"). I would encourage anyone to watch this story. This is Stephen King at one of his finest.
Read more
20 people found this helpful
Helpful
Comment Report abuse

Lone Biker of the Apacolypse
5.0 out of 5 stars Great Story
Reviewed in the United States on September 7, 2019
Verified Purchase
Sometimes, from the mind of Stephen King comes something totally unexpected. This film, along with Shawshank redemption, are two examples. I wish he would do more like this, but I realize something like this cannot be forced, Thank you Stephen for this. Aside from the story, the production of this film was very good. The acting was outstanding, the direction was superb.

I used VidAngel to filter some of the language, so I could share this with my children. They loved it too.

Read the book first if you wish, as there are some events which this movie changed a bit. either way, watch this movie (with VidAngel if you can)
Read more
5 people found this helpful
Helpful
Comment Report abuse

D. Nykiel
4.0 out of 5 stars Great movie!
Reviewed in the United States on May 1, 2020
Verified Purchase
“The Green Mile” is a sci-fi crime drama based on a series of novels by Stephen King. It tells the story of John Coffey, a man who was falsely accused of murder, but who was innocent, and who has some sort of magical powers. John Coffee uses his powers to miraculously cure one of the prison guards at Cold Mountain Penitentiary of a urinary infection. The whole movie is essentially this particular prison guard, Mr. Edgecombe’s own recollections of his time as a prison guard on Death Row and how he was subsequently healed---and how John Coffey had healed other people physically, emotionally, and, to some degree, spiritually.
I enjoyed the special features very much also. Even though I have not read Stephen King’s original books, I did, however, find it incredibly surprising---and cool---that unlike many other film adaptations of books, which are, more often than not, deliberately altered to such an extent, they are nothing like the original story, “The Green Mile,” according to Stephen King himself, is one of the vert few exceptions to the rule. This movie, apparently, is completely faithful to the original story---and I found that to be incredibly cool. This movie has something for everyone---Sci-Fi, suspense, drama, tragedy, romance, etc. I also thought it was cool and interesting that they were so meticulous in terms of recreating the world of American prisons as they had existed back in the 1930’s (because that was apparently when both the movie and the original books---were set).
I was, however, a bit perplexed by that one scene at the beginning of the movie where Officer Paul Edgecombe, the former prison guard, was brought to tears---either out of sadness, trauma or simple sentimentality---I am not sure which---when he saw that one scene from some Fred Astaire movie called “Top Hat,” which I have not heard of, let alone seen--- because I don’t know what the connection really is between that song in the movie and Officer Edgecombe’s time as a prison guard apart from the fact that it happened to have been on TV one time when he was working there. That was strange and perplexing. I also did not quite understand why every time John Coffey healed someone, bugs would come out of his mouth. I did not quite understand the connection between those healings and the bugs. That was kind of odd. I was also surprised, and somewhat disappointed, that John Coffey still wanted to be executed rather than taking up that one guard’s offer to release him. That was both strange and disappointing.
Overall, however, it was a great movie which I would recommend.
Read more
One person found this helpful
Helpful
Comment Report abuse

Each life attitude thought behavior memory carries within its own consequences. For Miracle of God John Coffey the consequence is inability to remember details of human unkindness "I don't rightly remember" and the forward drive to "take it back" by inhaling other's pain into himself with kiss it all better empathy, then "sick it up" vomiting out others' memory burdens. After each healing episode John Coffey is drained and spent, emotional amnesia erasing the event into a limbo of dementia. Yet his metacognition remains: he is forced to live long in loneliness, witnessing pain and trying to kiss it better.

Suffering is the story we tell ourselves, ideas beliefs judgment, about pain. John Coffey understands that life is what it is. Compassion allows the rest of humanity to acknowledge pain in others, while remaining functional in the face of suffering, and try to help. John Coffey feels obligated to "take it back." John Coffey's compulsion to reverse the afflictions of humanity creates existential pain which he cannot escape. John knows that his punishment for living long with the gift of caring is unescapable emotional pain.

In a crucial scene Paul Edgecomb (Tom Hanks) reveals to his wife: I've done some things in my life I'm not proud of. But for the first time I feel I am truly at risk of hell.

5* contemplation on burden of carrying the gift of healing and memory.
Read more

Thebes
5.0 out of 5 stars Yes Boss.
Reviewed in the United Kingdom on May 24, 2017
Verified Purchase
Classic Tom Hanks in one of Stephen Kings best stories (apart from Shawshank of course).

John Coffey is a special man. Not a murderer.
Great turn from the late Michael Clarke Duncan. Should have won an oscar for his role here.

lady anna
5.0 out of 5 stars brilliant--- not to have any Oscars is a total miscarriage
Reviewed in the United Kingdom on April 2, 2016
Verified Purchase
I would give this film 10 stars if I could.What a FANTASTIC film----well worth far more accolades than I could ever give it.Wonderful performances from all the cast.I have not just 'come across' this film I have seen it before----but that was a few years ago.Great portrayal of lives ' nearly done' and of life on Death Row for some inmates and staff.The sheer energy and compassion put into this production should be hailed as 'go-to and study' for some of the rubbish produced now. Most of you will know the story--so not going over it again.It was very informing also to see the 'how it was made' episodes----especially the efforts put into 'Mr Jingles' appearances!!!! ---its all very interesting to me. how movies come together I cant just say 'recommended' [ that would be a gross understatement]--I would say its a MUST.Also great to see Stephen King on set---- he was rightly proud of it all.
Read more
2 people found this helpful
Report abuse

A. Tuck
5.0 out of 5 stars 'Miles' ahead of other films.
Reviewed in the United Kingdom on April 5, 2017
Verified Purchase
Tom Hanks has not made a bad film and this must rate as one of the best. The guidelines, althoughh very familiar, are bolstered by a solid performance from all concerned. I laughed in many places and am not ashamed to say that I cried in quite a few. I will not go through the whole film and perhaps spoil it for future watchers, but I can safely say that it is probably one of the best fims to watch in a long time - quirky yet (sort of ) believable at the same time.
Read more
2 people found this helpful
Report abuse

N. M. Fletcher
5.0 out of 5 stars Diamond Luxe edition.
Reviewed in the United Kingdom on August 13, 2017
Verified Purchase
This is definitely the edition to get if you're a fan of The Green Mile. It's the same transfer as the Digibook edition from 2009 with the added incentive of over one and a half hours of " Walking the Mile ", a documentary on the making of the film.
Read more
5 people found this helpful
Report abuse
See all reviews