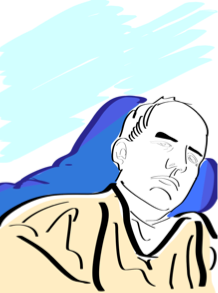 I also write under the pen name "Gregg Glory". Many of my works are available online at gregglory.com. On Amazon, my pen name's profile is here: http://www.amazon.com/Gregg-Glory/e/B0089M3BGG

Gregg Glory [ Gregg G. Brown ] has devoted his life to poetry since happening across a haiku by Moritake, to wit:

float back up to the branch--

He runs the micro-publishing house BLAST PRESS, which has published over two dozen authors in the past 25 years. Named in honor of the wild Vorticist venture by Ezra Pound and Wyndham Lewis, BLAST PRESS is forward-looking and very opinionated.

He still composes poems on his departed father's clipboard, which he's had since High School. 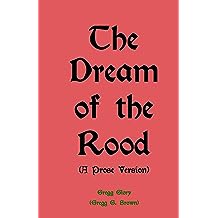 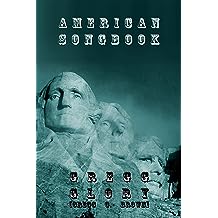 Come gather round me, multitudinous dreams

That in the dim twilight are murmuring soft;

Come lay by my head in the pillow-seam;

O, I would dare dream as few men dream

Beyond the cruel cudgel of the strong,

Beyond the purpled tapestries of is and seems

Hung before my eyes, beyond cold right or wrong.

FROM THE INTRO: The Old Truculence

A note concerning the basic arc of this book of poems—to re-register grace and freedom as America’s primary metier.

Freedom breeds elegance. Not the inbred elegance of aristocracy, where beautiful ladies eventually come to resemble their Russian wolfhounds. Nor, simply, the truculent elegance of that sly Benjamin Franklin who, as ambassador to the French Court, refused to bow before King Louis the 16th or doff his coonskin cap. Freedom breeds the desire to create one meaningful action with your entire life—the effortful elegance of the artist that James Joyce defined as the willingness to gamble your whole life on the wrong idea, a bad aesthetic, or, it may be, a genuine triumph. And America has created, and can still create, a unique scale of opportunity for such elegant “throws of the dice,” as Mallarme might say. A natty Fred Astaire (originally Austerlitz), gliding with the ease of an ice skater as he backs Rita Hayworth (a gal from Brooklyn) into immortality to a tune penned by the Jewish Jerome Kern in an industry patented in the U.S.A. is but one example of the scale of that opportunity. When you are free to do anything, a desire grows in the breast not to do just anything, but to do the best thing—and that is an aesthetic dilemma. The mere accumulation of capital, or the arbitrary exercise by minor government regulators of petty power, are two classic examples of the desire for a meaningful expression of life-status that lack the aesthetic instinct. Such timid ambitions grow most strongly where the full range of light is narrowed, and the blossom of selfhood must twist around corners to open its ruby glory in a thinning patch of sunlight.
Gregg Glory
Read more
Other Formats: Paperback 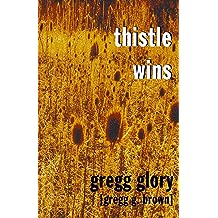 Once all wilderness was innocence. Later, all wilderness was sin. What does it say about wilderness, that it could be both sin and innocence—a space of condemnation and reprieve—at once? What does it say about us, limber interpreters of vastness? Every day someone takes a snapshot of themselves with the Statue of Liberty on his shoulder, or the moon upheld in her palm, the violent grandeur of the universe turned by metaphor and pixel-flash into a beachball.

Now we find our wildness in suburban glimpses: long weekends away to a campsite, the unwonted sting of a bee. Yet we were made by wildness; we were wolves before we mellowed to dogs.

In the dimwelter of evening we met for a swim.

The gawp of the lake aping the moon’s smooth light

Took our floating bodies with a silver swallow

As we swept our smiles filling with pushed water 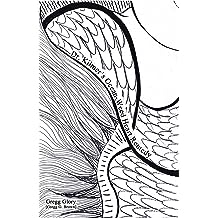 Dr. Kilmer's Ocean-Weed Heart Remedy Apr 16, 2020
by Gregg Brown, Gregg Glory
$0.99
Novella about a WWII vet who returns to civilian life as a deep-sea diver and confronts his war-past through a series of hallucinogenic undersea visions.
Read more
Other Formats: Paperback 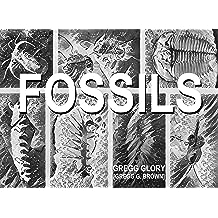 The river minglesits stubborn lament with the sea.
Pablo Neruda

I tend to acquire insights about what I'm writing as Iwrite.
A nation becomes itself as its history unfolds, displaying more andmore squares of its map of meaning.
Poetry and prose wash up against each other. As do history and imagination.
Sea and continent work together even while at odds to shape the world'stotality.
The pilgrim's foot defines the path to God, and begins by leavinghome.
Just so, poetry walks its path through prose.
Our general sense of things comes to us somehow in the great grab-bagof prose accounts
and facts:
The dirty litter of newspapers, the broken ballyhoo of blogs, cocksureconversations at the bar sitting elbow to bended elbow with uncrownedlaureates.
But our sense of what these things mean to us comes from selection andarrangement of the mosaic facts.
Inspiration and insight arrive together to complete the picture jumbledin the puzzle box.
It is when we kneel alone with our ignorance that the church's spirerises to its height.
And that's the poetry of it.

Irreducible and unique, yet blatantly commonplace as love:
The unpainted masterpiece brimming in the palette's rainbow....
As fire lies unstruck in the flint, so poetry lies asleep inprose.
And when that fire is awakened, the rock burns. 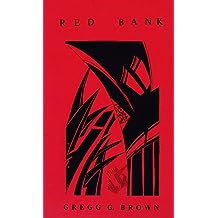 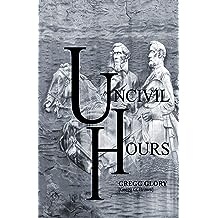 Uncivil Hours Jun 22, 2019
by Gregg Glory, Gregg Brown
$0.99
FROM THE INTRO
Long I’ve plotted an epic poem, a poem to stand in relation to my native country as those broad stripes stand in relation to our flag. The subject would have to be the Civil War, of course; it was then, as since no time since the Revolution, that the country grew articulate in self-definition. Lincoln was the poet we elected president. The Civil War generation was the most letter-writing cohort of warriors America has ever produced. Brother fought brother, fathers took up arms against their sons, and slaves escaped to return fire at their former masters—and then forgive them when they stood in post-war relation to each other as citizens.

UNCIVIL HOURS
What tragedy befell us in those days
Is not mine alone to toll, to tell—
A thousand voices, a million all
Wailing in abominable chorus could not
Convey the terror, anxiety and waste
Of those dead days.

Whatever one man can carry
Out of Hell, I’ll carry to tell you.
What words cannot do, let bones
Knitted by raw time at the breaks
Display in mute witness.

Assemble!
Ghosts of a time not yet made witless,
Armies whose worn shoulders show
As increasing mist, gather without regard
To blue or grey, and let your old voices
Roll coldly now that once had the hot
Imprint of youth. 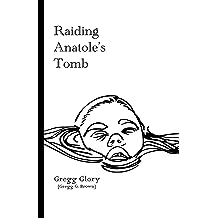 Raiding Anatole's Tomb Sep 20, 2018
by Gregg Glory, Gregg Brown
$0.99
In July 1871, Mallarmé’s second child, Anatole, underwent a serious illness starting at seven years of age. Anatole, who had been born with an enlarged heart, suffered from rheumatic fever, and died in October 1879 at the age of eight. Mallarmé left a long series of fragments in an attempt to assemble a poetic memorial for his son, what he called, as in his poems for Edgar Allen Poe and other writers, a ‘tomb.’

I’ve taken inspiration from these fragments, ideas, and much else. What follows cannot be considered a translation of Mallarmé’s fragments—but it certainly would not exist without his fragments. Much like Mallarmé’s project to memorialize his son by erecting a ‘tomb’ of poetry over his memory—these are the apprentice sketches of one visitor to that ruined monument.


FROM THE POEM:
Speech puts tears into the eyes, wet
Syllables your mother and I cannot say
Nor unsay—silent in the house today.
Read more
Other Formats: Paperback 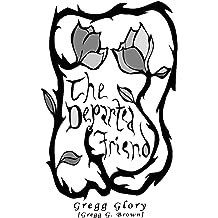 The Departed Friend Sep 20, 2018
by Gregg Glory, Gregg Brown
$0.99
If some grave power left us here,
Solitary seekers in the night,
Lonely voyeurs of the light,
Shall we blaspheme what strength appears?

Far better, broader, more intense
To see the sign of good in things;
Amid haphazard waywardings,
Love what loveliness may commence.


FROM THE INTRO: VENOM AND AGONY

Losing a friend is no easier or simpler than losing a limb. Whether through death, disagreement, or the theft of marriage, the loss comes to define a definite, though retrospectively imposed, era.

So it was with me. A heartsick fight with my best friend on the eve of his moving out of the apartment to join his fiancée in brotherly Philadelphia. The disagreement was over what I considered his maligning of a third, mutual friend—secretly harbored disorders of swallowed dislike and differences. All of which would resolve themselves in short order by his removal to Philadelphia! Much better, I thought, for the two of them to part friends and stay in occasional touch. To him, it was a matter of addressing an injustice and, from the way he vomited on, disgust with past demands and behaviors.

I should have let the whole thing just go down the drain myself, but instead I sent, a week later, an intemperate email outlining my unhappiness with his vile display. And thus, a strong, wonderously discovered friendship was lost, flushed onto the seaweed-rancid rocks—beyond the resurrection of moonlight or regret. Ah! Stupidity, stupidity.
Read more
Other Formats: Paperback 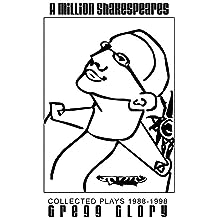 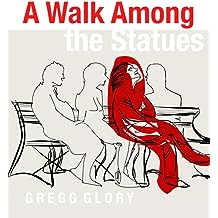 A Walk Among the Statues Aug 31, 2018
by Gregg Brown, Gregg Glory
$0.99
A collection of ekphrastic poetry, along with a section of poems reflecting on the poet's inspiration, or lack thereof.

According to "The Poetry Foundation": An ekphrastic poem is a vivid description of a scene or, more commonly, a work of art. Through the imaginative act of narrating and reflecting on the “action” of a painting or sculpture, the poet may amplify and expand its meaning.
Read more
Other Formats: Paperback 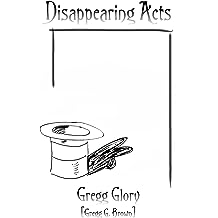 The police artist is drawing my face
In charcoal, line by line, in grim brimstone
For a stranger, one who attended the ill-
Attended impromptu poetry reading
Under a chilly streetlight flickering
Where we used the forbidden words
With facile ease as in the old days:
She is as in a field a silken tent.
Genders, pronouns, she, he and all that.
The stranger hadn’t seen much, though,
Just a zee zaying zomething, a blur
Like a face wearing a beard or sprouting one,
Two feet, or maybe one was fake, the stranger
Hesitated to say: other-abled, some color
Or other. Yes, yes, I think zee was a shade.
Read more
Other Formats: Paperback