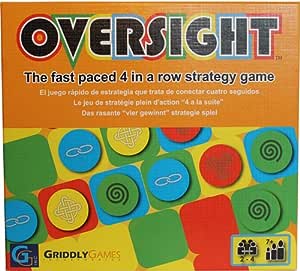 by Griddly Games
4.3 out of 5 stars 7 ratings
Available at a lower price from other sellers that may not offer free Prime shipping.

Exercise your mind and outwit your opponents with Oversight, the new fast paced 4 in a row abstract strategy game! Oversight is set up on a board of movable squares. Two to four players compete to be the first to get 4 tokens in a row. On their turn, each player can either place a token on the board, or shift an entire row or column of moveable squares over by one space. The rules are simple but the game gets increasingly challenging as players learn from their mistakes and predict their opponents’ moves.
This addictive brain-bending game and can be played by anyone aged 7 and up.

A fast paced 4-in-a-row abstract strategy game. The goal is to get 4 of your pieces in a row before the other players. The added difficulty is due to certain rows and columns being able to slide. Each turn requires either placing a piece on the board or sliding a row. The colour of tiles on the board does not effect where you can place your pieces. In this game no one is guaranteed victory.

OKshopper
3.0 out of 5 stars Okay. Not great.
Reviewed in the United States on June 16, 2016
Verified Purchase
It was okay. We played it a few times and managed to develop some strategy, but it didn't seem worth the effort. We moved on to something else more exciting. It will probably end up in the donations box.
Read more
Helpful
Comment Report abuse

Client d'Amazon
5.0 out of 5 stars Fun
Reviewed in the United States on October 19, 2019
Verified Purchase
I like it
Read more
Helpful
Comment Report abuse

Oversight is published by Griddly Games and is intended for 2-4 players, 7 years old and up. A single game will occupy between 15 to 30 minutes of your time, depending on the analysis tendencies of the player(s). Retail cost is in the vicinity of $20. A copy of the game was provided to the author for review purposes.

Pavlova
5.0 out of 5 stars Oversight Puts Connect 4 to shame.
Reviewed in the United States on April 23, 2013
Rule number one: Never play against someone who works at the company. At first glance, the simple-looking but definitely compelling board game Oversight. After a few quick matches by Griddly Games` Angela Welch, the company's now newly minted Head of Marketing & Operations But I managed to score myself a victory once I got the hang of the sliding tiles and color matching.
Anyway, Oversight is cleverly designed so anyone can play (provided they're not completely color blind and/or can't see the symbols on the pieces that help color blind people play just fine) and what's fun about the game is how you start to predict moves as tiles are placed and slid or not moved at all once they're on the board. It's a mix of Connect Four and Tic-Tac-Toe with a nice twist of being able to push an entire row of pieces in order to secure a victory or prevent your opponent from winning. I know the device crowd would go bananas over this game, but as of yet, I haven't heard of any plans to bring Oversight to the digital world just yet. Well, I don't own an iPad or Android device anyway, so it's not as if I'm missing anything if I only buy the board game. Besides, when the cloud collapses and no one can get a signal, I'll be running my Oversight casino, winning everyone's rations and water while waiting for the power to come back on.
Read more
3 people found this helpful
Helpful
Comment Report abuse

Ralphy
5.0 out of 5 stars Great strategy game for all ages
Reviewed in the United States on April 24, 2013
We played a lot of connect 4 with our kids. Everyone had to wait their turn since only 2 people could play at the same time. Oversight allows for 2-4 players. This 4 in a row strategy game was simple for us all to learn - get 4 in a row - vertically, horizontally or diagonally. The challenge is that there are rows and columns that can slide.

This allowed for great defensive moves by destroying your opponents set up by simply sliding a row. The kids were as good at this game as we were. Actually they often pointed out how we had an "Oversight" as they made their last move for a win.

We definitely take this game out over and over again.
Read more
One person found this helpful
Helpful
Comment Report abuse

Christina
5.0 out of 5 stars Strategy! Strategy! Strategy!
Reviewed in the United States on March 11, 2014
This may seem like your classic connect-four style game, but do not be fooled. The shifting tiles add a dimension of game play that is unique and interesting. The ability to move your opponents playing pieces adds an interactivity with the board and the other player that can really get you going with a competitive edge!

It can get fierce!

Fun game and easy to pick up for the young kids. They like the colors. I played with a friend and we ended up in a bitter battle shifting rows back and forth for a while! The colors are a visual distraction adding to the complexity of game play. I almost let my opponent score 4 in a row!

The board is also comes with reversible playing pieces in the event someone is colorblind! Thoughtful!
Read more
One person found this helpful
Helpful
Comment Report abuse
See all reviews from the United States

KSmb
4.0 out of 5 stars Love the game
Reviewed in Canada on January 6, 2017
Verified Purchase
Love the game. Best with more than 2 players or it can end in a stalemate. The pieces could have been made better. They are cardboard and don't slide well.
Read more
Helpful
Sending feedback...
Thank you for your feedback.
Sorry, we failed to record your vote. Please try again
Report abuse