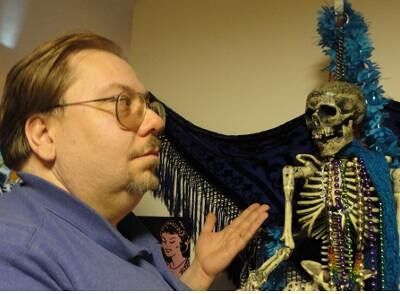 Grig "Punkie" Larson (b. 1968) was born in Cyprus on British soil, the only son of a pair of Swedish-American descendants. He grew up in Northern Virginia, finding fandom through D&D, FanTek, and Rocky Horror. He works as a Linux systems administrator by day, and by night he's masked vigila--er... uh, an author, open source advocate, and works for the DC Rollergirls. Somehow he fooled enough people to be the president of Katsucon Entertainment for the last 3 years, where his staff runs a 15,000 attendee anime convention. He also works for Onezumi Entertainment for Intervention and Regeneration Who. There’s no shame in his game.

A staple in VA/DC/MD science fiction and anime fandom since the 1980s, he's been a panelist, moderator, emcee, actor, sketch writer, convention adviser, narrator, and the kind of sub-fame that keeps people from asking, "Hey, how'd HE get in here?" (Answer: We still don't know, but since he’s already here, why not?) He's done everything from chair a convention to being the guy who vacuums the staff suite. In no particular order. (Partially untrue, there’s some kind of order, but it usually involves some ritual chanting and Jelly Babies for sacrifice…)

In 1993, his first book, "The Saga of Punk Walrus," became a cult classic. Since then he's been published in Gateways, several short story anthologies, and written several sketches and spoofs for various acting venues. "Trolley," was his first published steampunk/horror novel in 2011. You can often see him at Balticon, Katsucon, Anime Mid Atlantic, and DC Rollergirl home bouts. He is a Redditor and also seen posting on the Ars Technica forums under "punkwalrus."

[I did my best, Grig. I DID MY BEST. *assistant runs away sobbing*] 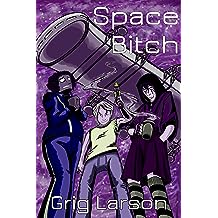 Space B!tch: A Verdes Mujeres novel Oct 19, 2015
by Grig Larson
( 3 )
$9.95
Sarah Phulajanma was bored. Her skills as a great ship pilot were not being challenged while working as the captain of a funeral barge. As middle age set into her waistline, she decided to change her dishwater career circling between a dozen star systems to the more exciting seas of working for a shipping company to assist the expanding frontier colonies in the Verdes Mujeres systems. But the recruitment posters did not warn Sarah of the hardships she was to endure.

Eliza Mortales, her captain, may or may not have killed her last crew. Jen Koipack was a security engineer and also member of an overly-happy goth cult that was not allowed to appear negative. Yolanda was their leader, and about as corrupt as they come. Boggart was their nemesis, who solved every problem by just throwing more men into a battle until he ran out. He frequently runs out.

And then there was the matter of rampant piracy. Among all the employees.

Too much to handle? Don't worry, Sarah. In a futuristic universe where payroll fraud is worse than murder, misogyny is still rampant, and genetically engineered people are morons, nobody really knows what they are doing and who's in charge. The only way to survive out in the void is to be completely batshit crazy.

Be a Space Bitch.

From the insane author who brought you "Trolley" comes a new dark humor sci-fi. It has adventure! It has action! Probably violates a few scientific laws along the way. It's also incredibly and terribly violent. This story also passes the Bechdel test, but, ah... don't tell her.
Read more 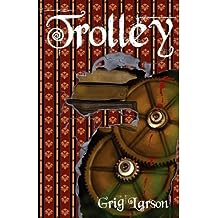 Trolley May 6, 2011
by Grig Larson
( 10 )
$9.95
Unlike most girls, Heather January had yet to outgrow her tomboy phase. Startled to find herself so quickly on the cusp of womanhood, she still desires to work with the cogs and machinery used to power her world, even though such things are forbidden to women. In choosing to rebel against a male dominated culture, she discovers a dark secret beyond imagining. When Heather becomes aware of forbidden knowledge spanning centuries, she finds herself an unwitting pawn in a much larger and horrifying secret that threatens all of civilization. Behind the access panels of a polite society, between the teeth of the gears of progress lies the path to insanity... and Heather's terrifying destiny.