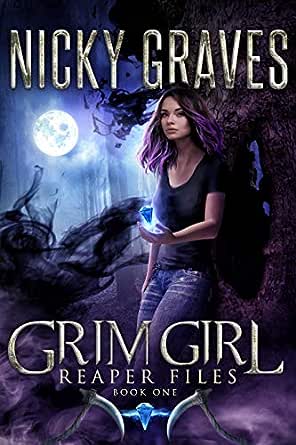 You've subscribed to Reaper Files! We will preorder your items within 24 hours of when they become available. When new books are released, we'll charge your default payment method for the lowest price available during the pre-order period.
Update your device or payment method, cancel individual pre-orders or your subscription at
Your Memberships & Subscriptions
There was an error. We were unable to process your subscription due to an error. Please refresh and try again. 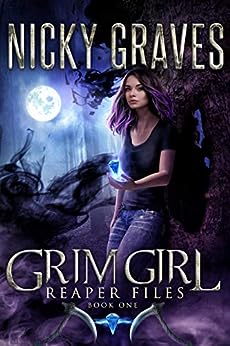 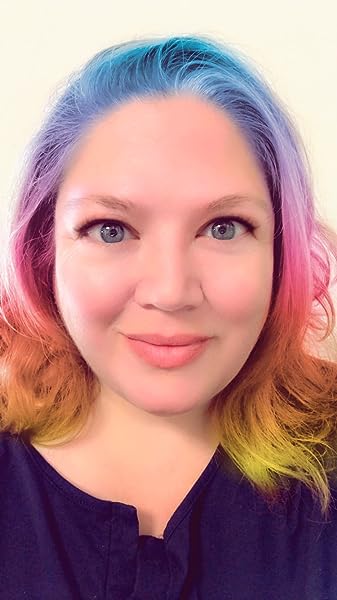 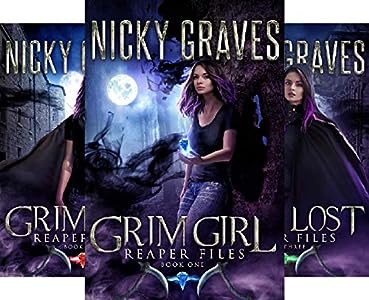 "This is well written and has fantastic characters! I cannot wait to see what happens next. Phenomenal job!!!" - D. Milligan, Booksprout reviewer

"Nicky Graves developed a world as real as life . . . a couple of twists and suspense that keep you turning the pages." - A.K. Shaw, reviewer

"This is a funny and quirky storyline, which made for a fascinating read." - C. McTernan, reviewer

Longshorts
5.0 out of 5 stars Grim Girl: A Reaper's Tale ( Reaper Files Book 1) by Nicky Graves
Reviewed in the United States on October 13, 2020
Verified Purchase
Riley Graves, a grim reaper on the make, faces all the horrors of becoming a reaper, the fear of Death, the strange feelings she has when a human's death is near, the reapers that try to teach her what to do - but she isn't dead, yet! Follow along when Riley tries to figure out how to be a reaper without dying, what the rules are, who the other reapers are to her. This story is similar to the TV series "Dead Like Me", but with a strange twist you will enjoy. I read this story in one day, couldn't put it down (except the usual interruptions) and enjoyed it a lot! Great author!

Gwenshuman@gmail
4.0 out of 5 stars Death will become her
Reviewed in the United States on November 3, 2020
Verified Purchase
Imagine being a senior in high school, being told you are destined to be a reaper, and making an enemy of death. All of this and more are in this stand alone first book of the 3 book series. It is a fun book that is well edited and entertaining.
Read more
Helpful
Comment Report abuse

bethana
5.0 out of 5 stars Great Book
Reviewed in the United States on October 12, 2020
Verified Purchase
This book was awesome, couldn’t put it down, I would tell anyone to read it and make sure you finish it, now onto the next book which I’m sure I won’t be able to put down done done done
Read more
Helpful
Comment Report abuse

Jackie B
3.0 out of 5 stars A Y/A or N/A audience will appreciate this more than this old lady did.
Reviewed in the United States on May 5, 2020
This is a Y/A or maybe an N/A book. While it held my attention for the most part, there was a little too much high school angst in the story for my taste (I’m nearing 60 years old). I’m sure the younger crowd will appreciate this more than I did. There was a time or two that I thought about quitting the book altogether -just my being frustrated with it. The flow was decent, & it was a fairly fast read. There were a few places that felt a bit predictable & a few places I think were intended as humor but didn’t work out as humorous. The main female character is ok, just not well developed IMO, I didn’t feel I knew her any better at the end of the book than I did at the beginning & nothing drove me to see what happens next. I didn’t hate the story, but it just didn’t leave me wanting to continue with the series.
Read more
9 people found this helpful
Helpful
Comment Report abuse

AKS
VINE VOICE
4.0 out of 5 stars A Really Fun Read
Reviewed in the United States on May 14, 2020
Grim Girl is a delightful story, even if it is about death...well mostly. Riley Graves is your typical 17-year-old high school senior. She is not one of the popular kids, and she tends to be a bit socially awkward. She self identifies as an underachiever, and that seems to be her lot in life until she discovers that she has a thing for death. With a ton of drama and a few romantic sparks, Nicky Graves developed a world that is as real as life and as surreal as being able to see people's souls taken to wherever they go after death. The characters are a bit quirky, engaging, and believable. They make the book fun to read. There is also a couple of twists and suspense that keep you turning the pages. The end is a bit of a cliff hanger, so the next book is already in my shopping cart.

Maria F.
4.0 out of 5 stars A new take on reapers *spoiler*
Reviewed in the United States on May 22, 2020
This was a great find! This story is the first book in a new continuous series (not a stand-alone). The main character is about to turn 18 when she begins to see ghosts. From there she is thrown into a world of supernatural beings. She must deal with all new changes in addition to her normal, everyday problems of being a teenager with a bratty brother and an worrisome mother. The people who are supposed to help her on her journey do not know the answers to her questions, her family is threatened, and her life is in danger...that is a lot for anybody to deal with.
Read more
Helpful
Comment Report abuse

Mimosa
3.0 out of 5 stars Not sure about this one
Reviewed in the United States on May 11, 2020
This story has potential to be more. Knowing that this is the first book for this new series, I still expected a little more. More character development for Riley. Even at the end of the book i find that there's no progress from her. Will have to see in the next book if she will progress more. I don't know if i will continue this series at the moment, i wasn't engrossed in the story and the characters.

I received a free copy of this ARC via Booksprout and am voluntarily leaving a review.
Read more
Helpful
Comment Report abuse

SCambra
4.0 out of 5 stars Unique
Reviewed in the United States on May 13, 2020
Grim Girl is the start of the new Reaper Files Series. Riley can see dead people. Not only that, she finds out she’s set to be the first female reaper. It’s a fresh, unique take on the usual grim reaper storyline. There are some interesting characters that I’d like to learn more about. Looking forward to see how this story progresses.

Marta
5.0 out of 5 stars FULL trilogy is not been released.
Reviewed in the United Kingdom on May 3, 2020
Verified Purchase
Love this book and I wrote a great review BUT!!!

Until 7 October 2020 won't be released the 2nd book of this TRYlogy. If I knew last week I wouldn't have bought it.
I cannot stand waiting for a book to be released. Years ago I promised myself I only would buy fully released trilogies.
Very disappointed. Amazon you should write an alert before people buy an unfinished story.

I recommend it YES but do not buy it until is fully released or you will be disappointed to having to wait 6 months for the second part and probably 12 months for the third part.
Read more
One person found this helpful
Report abuse
See all reviews